(Minghui.org) Editor's Note: On March 5, 2002, a small group of Falun Gong practitioners tapped into the Changchun City Cable Network to broadcast truth-clarification videos, including "Falun Gong Around the World" and “Self-Immolation or Chinese Communist Party's Propaganda Stunt,” to help people understand the facts about Falun Gong and the persecution of Falun Gong. As a result, these practitioners were brutally persecuted by the communist regime.

One of the practitioners was Mr. Liang Zhenxing. He was severely tortured in Siping Prison in Jilin Province and persecuted to death in Gongzhuling Prison.

The author of this article was detained and persecuted in Siping Prison as well, and witnessed how Mr. Liang Zhenxing and other practitioners were inhumanly tortured. The following is his personal account of his incarceration in Siping Prison.

Siping Prison is located in Shilingzi Town, and most of the guards were local ruffians and hooligans.

The prison incarcerated criminals who committed such major crimes such as homicide, rape, and drug trafficking or who were gang leaders. Innocent Falun Gong practitioners were also detained there.

Along with other prisons in China, Siping Prison forced detainees to do slave labor, and cement was produced there.

Below is what I experienced and witnessed in Siping Prison. I'm describing it all to let people know about the Chinese Communist Party's brutal persecution of Falun Gong.

I Was Severely Tortured

I was illegally arrested and sent to Ward No. 10 in Siping Prison, a ward that was set up specifically to hold and persecute practitioners. The guards not only tortured them, they also instigated inmates to do the same. Some inmates still had a conscience and refused to help, so they were sent to do exhausting forced labor. The other inmates ganged up with the guards and brutally tortured practitioners.

Because I refused to give up my belief, six inmates carried me to a dark cell. They took off my clothes, held me down, and shocked me with two electric batons until I passed out.

After I regained consciousness, they continued to shock me and also beat and kicked me. They stabbed my abdomen with sharp brushes and used chopsticks to stab my anus.

Practitioners had to sit on boards for long periods of time and were deprived of sleep. They had to watch videos that slandered Falun Gong and write "thought reports."

In addition, the guards forced practitioners to do slave labor for 14 to 17 hours every day, such as processing cell phone batteries and making cemetery souvenirs in toxic surroundings. Their eyes watered and their noses ran. However, the guards often extended the working hours and severely beat whoever didn’t finish his quota.

I Witnessed the Inhuman Persecution of Mr. Liang Zhenxing from Changchun City

Mr. Liang was often dragged to a small dark cell where he was brutally tortured by the guards and inmates, including the head of Ward No. 10 whose surname is Yi, deputy head Zhou Lijia, guard Yang Tiejun, and inmates Gao Minglong and Yan Dequan.

The guards shocked him with four electric batons, leaving charred bloodstains all over his body. Mr. Liang was kept tied and fettered for more than two years except for one day when an inspection team from Beijing came to inspect the prison.

Several inmates dragged Mr. Liang from his bed on June 29, 2008, took off his clothes and slashed his back with a whip. Gao Minglong and Zhang Liwei took turns lashing him until he passed out.

The whipping was so severe that his back was left with bleeding open welts. The inmates laughed wildly at the horrible appearance of his back. Gao even said, “What fun! It's been years since I've had so much fun. I've never been able to beat anyone like this!” 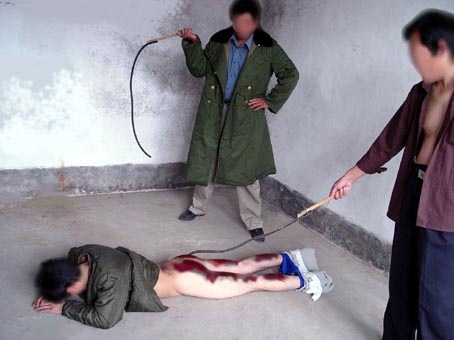 Torture reenactment: Lashing with a whip

Deputy prison head Zhou Lijia came to check the cells on July 9, 2008. Mr. Liang said to him, “Stop the persecution!” Zhou slapped his face and told inmate Yan Dequan to slap him more and kick him.

Inmate Yang Jianguo stabbed Mr. Liang with a spike. He beat and kicked him, grabbed his hair, and smashed his head into the wall.

Once Yan Dequan tied Mr. Liang’s head to his legs and told several inmates to sit on his back. In the evening, an inmate surnamed Wang used a lighter to burn Mr. Liang’s head. He also slammed his head into the bed beam.

There was an egg-sized depression on the left side of Mr. Liang's head, which was caused by the guards’ severe beatings. Gao Minglong and other inmates noticed it and often hit him there repeatedly.

Gao Minglong once boasted about how he tortured Mr. Liang with a force-feeding tube. The guards used to force-feed Mr. Liang via a tube in his stomach. They didn’t take the tube out and it stuck there. Gao then pulled the tube, forcing Mr. Liang to go wherever he went.

Yan Dequan and a group of inmates took off Mr. Liang’s clothes and poured cold water over him in late September 2008. They inserted a cucumber into his anus. Yan Dequan and Wang forcibly held Mr. Liang and had another inmate sexually assault him.

Mr. Liang was tortured almost every moment and had injuries all over his body. The guards and inmates often slapped him, several hundred times each session. When they got tired, they hit him with their shoes.

The guards also spent the money that Mr. Liang’s family sent to buy his food. Once they spent over 1,000 yuan. One guard said, “It’s Liang Zhenxing’s treat, so we don’t beat him today.” However, soon after they finished eating, they punched and kicked him again.

Around the 2008 Olympic Games, three practitioners were persecuted to death in Ward No. 10. One practitioner’s family hired an attorney and appealed in Beijing. Due to the pressure from higher authorities who wanted to maintain a "good image" as host of the Olympic Games, the prison put six inmates who had beaten the practitioner to solitary confinement. However, this was just a pretend punishment, as the six inmates were provided good food and they still enjoyed beer as usual.

At this time, Mr. Liang was transferred to Meihekou Prison, then to Gongzhuling Prison, where he was persecuted to death on May 1, 2010.

Above is what I witnessed when I was detained with Mr. Liang. This is only a small sampling of what went on in Siping Prison.

Other Practitioners Tortured in Siping Prison

I also saw the following practitioners being cruelly tortured in Siping Prison.

Mr. Chen Liguo was beaten and kicked by inmates including Zhang Liwei. Several of his teeth were knocked out and he had multiple bruises.

Mr. Gao Weixi was a national ice hockey coach. Due to the severe beatings he suffered, the skin on his back was chapped and broken open and he lost many of his teeth.

Mr. Hu Dawei was subjected to beating by Gao Minglong and other guards on May 13, 2008, causing his face to swell with bleeding injuries and his eyes were bloodshot.

Mr. Meng Fankui was beaten and stabbed with sharp wood by Gao Minglong.

Mr. Xu Hongwei had difficulty walking for years due to repeated beatings.

Mr. Zhao Liandi was mentally disordered due to the persecution he suffered.

Mr. Wang Hongge was beaten and kicked by Gao Minglong and Shang Xiaohui.

“The Whole Family Is Blessed When One Member Practices Falun Gong”