(Minghui.org) Mr. Huang Peidong, a practitioner in Fushun City, Liaoning Province, was arrested by local police in September 2009. Police tortured him at Wanghua District Police Department. They blinded him by rubbing mustard oil into his eyes.

Mr. Huang made the following statement:

My name is Wang Peidong and I am a Falun Gong practitioner. After I began practicing Falun Gong, I improved both physically and mentally. I always try to be a better person by following the principles of Truthfulness-Compassion-Forbearance. As a taxi driver, I never overcharged my customers and tried my best to help them.

Although I was just an ordinary person who worked hard to make a living like so many others, I could not escape the communist regime's brutality. Because I practice Falun Gong, I was illegally arrested, detained for four years and blinded by the authorities as they tortured me.

Family Broken As the National Day holiday approached in 2009 (October 1 is China's National Day) the persecution of Falun Gong was intensified, including in Liaoning Province where I was located. Party officials ordered police departments and precincts to arrest practitioners, according to certain police officers who later explained this to me.

Wang Weiguo and five other agents from Heping Police Station came to my home at 7 a.m. on September 18, 2009. After arresting my wife and me, they ransacked our home.

Police took me to the Wanghua District Police Department and “interrogated” me. Guards tied me onto a torture device called the Tiger Bench. After pouring mustard oil into my eyes, nose, and mouth, they rubbed these areas with dirty towels. I was in extreme pain and it was beyond tolerance. I wanted to scream, but my mouth was stuffed. I wanted to move, but my whole body was tied up. The torture continued for two days and my eyesight gradually worsened. In the end, I was blind, and remain so to this day. 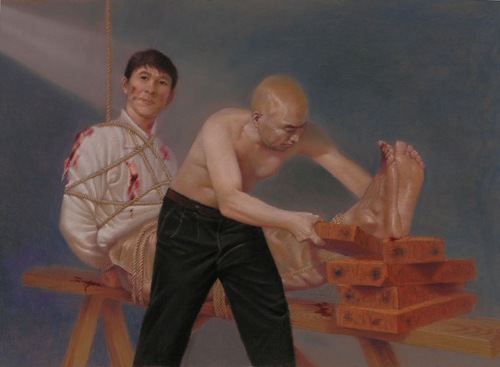 Police sent me to a detention center two days later where they not only tortured me, but also attempted to force me to betray other practitioners. I refused to turn them in. Guards were upset and they told inmates to humiliate, beat and torture me, in addition to slave labor.

Police also ransacked my home and confiscated my personal belongings, which included 12,800 yuan in cash (I just borrowed this amount to pay off a debt), a computer, a DVD player, rings, necklaces, earrings, and other items.

Officials held a show trial for me on January 19, 2010. There were no witnesses or evidence, and no law broken, yet Wanghua District court officials sentenced me to four years of imprisonment because of my beliefs. I was thus sent to Dabei Prison in Shenyang City. 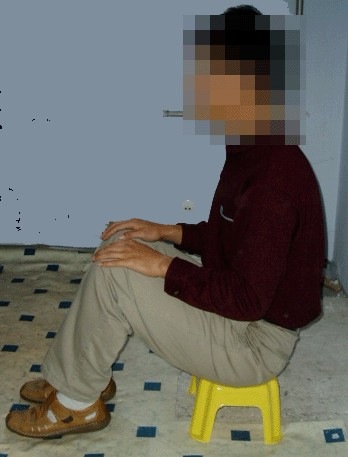 Torture demo: Forced to sit on a small stool for a long time. This brings severe harm to the abdominal area. Stool edges also damage the bottom.

The torture was very brutal in the prison. There was one practitioner from Guchengzi Town in Fushun City. Because he went to the toilet, inmates beat him causing him to defecate in his pants. In another example, inmates framed an elderly practitioner in order to “transform” him. This practitioner's head was slammed onto a concrete window sill and he had to have 21 stitches put in to close up the wound. He is still forced to do hard labor now.

I am now completely blind. My wife was diagnosed with late-stage breast cancer after she was released from prison. She could not take care of herself at all after the surgery. My child borrowed money in order to travel overseas to work, but had to come back because of the financial burden caused by the persecution. We now owe a lot of money which we are unable to repay.

My experience is only one example among the indignities suffered by millions of Falun Gong practitioners throughout China. We hope that the people who harmed us stop following the communist regime and stop doing bad deeds. Every one is ultimately responsible for his or her own actions. The recent fall from favor of two prominent Party officials, Bo Xilai and Zhou Yongkang, are examples of this.