(Minghui.org) Today's news from China includes incidents of persecution that took place in 6 cities or counties in 5 provinces. According to this report, one practitioner was subjected to mistreatment during detention, and at least 7 practitioners were illegally arrested. 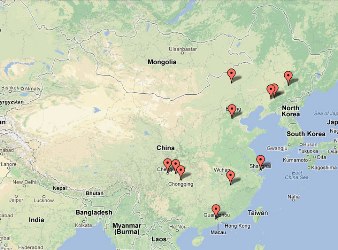 In the early morning of July 27, 2012, Ms. Zhang Zhishu from Dazhu County, Chongqing, saw banners defaming Falun Gong hanging on the street in Dazhu County. She went to destroy the banners and was arrested by awaiting police. Her feet were broken by the police, and she is currently in critical condition on the verge of death.

Mr. Liao Banggui, 64, has been arrested and detained many times for practicing Falun Gong. He was incarcerated in the Xinhua Forced Labor Camp in Mianyang three times.

On April 6, 2011, Mr. Liao was arrested by officers from the Fuyuanlu Police Station in Suining while he spoke to people about Falun Gong. Later on, he was sentenced to three years in prison and sent to Wumaping Prison in Leshan, Sichuan Province.

Mr. Yang Zhixiong was arrested by police at the apartment he rented in Shunyi, Beijing, on November 3, 2012. He was sent to the Xiong County Detention Center.

Ms. Hu Shuiying was arrested at Xiangshan Plaza in Xihu District by officers from the Xihu Police Department and the Kuaizixiang Police Station on the morning of December 7, 2012. Her home was also ransacked. She is being held in the Nanchang Second Detention Center.

Mr. Liu Quan was arrested by police shortly before October 24, 2012. The police also confiscated his computer and cell phone.

Mr. Sun Baoyu was arrested at home by officers from the Yongji Domestics Security Division and the Chengbei Police Station on the morning of December 8, 2012. He was sent to the Shahezi Brainwashing Center in Jilin City, Jilin Province.

Mr. Liu Defu from Shenhe District was arrested by police from Dadong District on December 9, 2012. The police ransacked his home and arrested Mr. Liu. They also took his son, who is not a practitioner, into custody. Mr. Liu is being held in the Shenyang Detention Center.

Wu Yuhasi from the Xilinhaote Domestic Security Division and Liu Haotao, director of the Neighborhood Committee, led about 10 people to ransack Mr. Shi Yanwei's home at noon on December 10, 2012. The officers confiscated personal property worth 10,000 yuan, including about 1,000 yuan cash. Mr. Shi was arrested.

Ms. Li Ni, 40, was arrested when she went back to Pudongxin District, Shanghai, on August 10, 2012. She is being held in the Changning Detention Center in Shanghai.