(Minghui.org) On February 9, 2001, Ms. Yu Chunhua left her hometown in Shandong Province and walked towards Beijing to appeal for Falun Gong. She has never been seen since. In the past 12 years, her family has not given up searching for her.

Ms. Yu lived in Xiqugezhuang Village, Xiagezhuang Town, Laixi City, Shandong Province. After she started to practice Falun Gong, she followed the principles of Truthfulness-Compassion-Forbearance and cultivated her xinxing. Before she practiced Falun Gong, she had severe gynecological diseases. She often had colds, even in summer. All of her ailments magically disappeared after she started to practice.

Jiang Zemin launched the persecution of Falun Gong in 1999. In order to let the government know that “Falun Dafa is righteous,” Ms. Yu decided to go to Beijing to appeal for Falun Gong. When she went to Beijing the first time, she did not know which way to go and ended up in Yantai, Shandong Province. She was taken to an asylum by the Yantai police. Police officers from the Xiagezhuang Police Station informed Ms. Yu's husband to pick her up.

In September 2000, she walked for nine days to Beijing to appeal. She was arrested in Beijing and escorted back. She was detained for two weeks. In October 2000, the local police took her to the Xiagezhuang Police Station and tried to forced her to give up her belief. She said she would never give it up. Then she sat on the ground to meditate. Police officers Zhang Chan and Zhang Shu kicked her legs, feet, and arms. She didn't move. The two policemen burned her feet with a red-hot hook used to move coal. Ms. Yu was arrested many times and her husband was also harassed by the Xigezhuang police repeatedly.

One day the police called Ms. Yu's husband to the village office and ordered him to pay 2000 yuan. He refused. The police told him to take care of his wife and keep her from going to Beijing. Ms. Yu's husband said, “Falun Gong is good. My wife is great. A housewife can leave her home, her husband, and children and go to Beijing to appeal. It is so extraordinary. Could you do that?”

In order to clarify the truth to the government, Ms. Yu walked to Beijing again to appeal on February 9, 2001. She hasn't been seen since that time. Her whereabouts are unknown. After hearing that she had been arrested, her husband and family members looked everywhere for her. When they heard about a prison in Hanting, Weifang that was just for women, they went there to look for her. They spent 1800 yuan to get better information about Ms. Yu's whereabouts. Finally, they were told that Ms. Yu was not there.

Ms. Yu's family is very poor. She has two daughters. At the time she went missing, her 19-year-old younger daughter was in high school. Her tuition has been a hardship for the family. Ms. Yu's family worries about her very much. In order to find her, her husband and family members have searched for her for a long time. A good family was ripped apart by the Jiang regime. 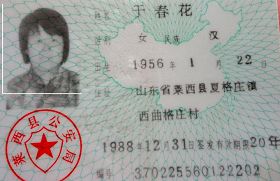