(Minghui.org) “As a German, I'd naturally compare the Nazi's time with what is currently occurring in China. I hope the Chinese people will not repeat the same errors the Germans made”, said Valentin, a German Falun Gong practitioner. Valentin made this comparison after attending the rally on Capitol Hill in Washington DC on July 12, 2012. The theme for the rally was “Stop the Persecution of Falun Gong: Support the Nine Commentaries and the Three-Withdrawal Movement.” 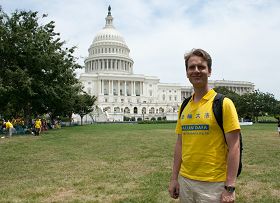 Valentin hopes the Chinese people can have a clear understanding of the CCP's crimes against Falun Gong, not associate with evil, and have a true grasp of their own future.

Members of U.S. Congress, human rights groups, representatives from various organizations, and about 1,500 Falun Gong practitioners attended the gathering. The event delivered a clear message, not only to the Chinese authorities and the Chinese people, but also to the U. S. Government, the American people, and all governments around the world that the most evil crime on our planet – live organ harvesting from Falun Gong practitioners by the Chinese Communist Party (CCP) does exist.

Like others at the gathering, Valentin was touched by the speeches. The atrocities committed against Falun Gong practitioners by the CCP reminds Valentin of the acts committed by the Nazis. He is also concerned that the Chinese people might be deceived, just like the German people were at that time, since many Chinese don't know about and don't want to believe the heinous persecution of Falun Gong practitioners.

Valentin said during the Nazi's rule, many German people did not know of the crimes being committed by their government. The first concentration camp in Germany, Dachau, is located only 10 miles away from his hometown of Munich. The Nazis not only killed and cremated the detainees there, they also carried out experiments on them while alive. In 12 years, over 100,000 people were missing. In 1945 when the Allied armies liberated the 67,000 survivors from the Dachau Concentration Camp, the residents of the nearby town of Dachau did not even believe the Nazis' atrocities; instead, they thought the Allied armies exaggerated it. It was not until the Allied armies forced all adults of Dachau to visit the concentration camp and see for themselves the corpses that the Nazis didn't have time to cremate, that the Dachau people were shocked to realize such a terrible holocaust had actually occurred under their noses.

“Since the state's power was so concentrated, every citizen was living under tremendous authoritarian pressure,” said Valentin. “When we look back at that period of history, out of those who supported the Nazi's and were later sentenced, some cooperated with the Nazis unknowingly.”

While speaking about his cultivation experience, Valentine felt it has been miraculous. He said he used to focus on material gain and did not believe in spiritual things. “But I was also aware that I had paid too much attention to money and power, which did not bring me any benefit.” Later his supervisor introduced Falun Gong to him in Hong Kong. “It made me understand that the path I had pursued could not bring me anything. Falun Gong led me to embark on a profound way. The more I cultivate, the better understanding I have.”

For some Chinese who mistakenly believe Falun Gong practitioners are involved in politics, Valentin said, “Some people say that we participate in politics, this is a totally wrong concept. We are only helping those people being persecuted in China. Falun Gong is a spiritual movement, and every one just cultivates oneself. I think every Falun Gong practitioner would rather quietly do the exercises and read Falun Gong books.” Because of the persecution, Falun Gong practitioners are forced to take efforts to stop it. He emphasized, “One thing is very clear—no authoritarian regime that persecutes a righteous belief can last long.” He hopes that his efforts can help the Chinese people to gain a better understanding of the truth, so that they will not repeat the German people's mistakes.

“The Secret to Effective Sales and Marketing Is Not in Techniques ”