6. Risking Their Lives, Practitioners Clarify the Truth, Validate the Fa and Save Sentient Beings 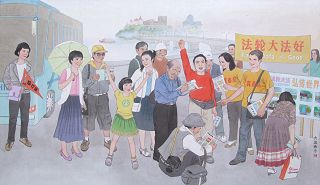 [Selected Submission] Traditional Chinese Painting: “Voice from the Bottom of the Heart”
(The yellow banner says, “Falun Dafa is great”)

“Year after year, day after day, we deliver Dafa truth-clarification materials, booklets, and CD's to thousands and thousands of families, and tell every person with a predestined relationship about the truth of Falun Dafa. We tell them that quitting the Communist Party and its affiliated organizations can save their lives. We do this from the bottom of our hearts and out of our conscience. Our goal is to let all Chinese people know that Dafa is being persecuted and Dafa practitioners are innocent. Our wish is that the Chinese people not be fooled by lies or deceived by illusions. We sincerely hope that every Chinese person who has received Dafa truth-clarification materials will learn the truth of Dafa and know what's happening around him.” - “On the Brink of Death, the Spark of Life Was Ignited Within Me” (http://www.en.minghui.org/html/articles/2012/6/18/134029.html)

This is the wish of all Falun Dafa practitioners. Practitioners have been doing this for 13 years, ever since the Chinese Communist Party (CCP) started the persecution in 1999.

“I arrived at Tiananmen Square around 10 a.m. on October 6, 2000 ... from behind me I heard some voices that resounded loudly across the sky: 'Falun Dafa is good! Restore my Master's innocence! Falun Dafa is the Righteous Law!' … The vicious policemen beat those Falun Dafa practitioners and grabbed their banners as soon as they got out of their cars. They also beat and kicked Falun Dafa practitioners to the ground and then stomped on their heads and mouths. Some fierce policemen grabbed practitioners by their hair and dragged them into police cars. In addition, violent police officers snatched cameras from bystanders. Some officers threw cameras onto the ground, and others ripped the film out. … Obviously they [practitioners] knew that if they went to the square they would be beaten, arrested, sentenced to prison, sent to the labor camps, or forced to lose loved ones or even their own precious lives. … " “Being faced with such a brutal and bloody scene, many Falun Dafa practitioners still fearlessly approached Tiananmen Square with banners unfurled in their hands and shouted loudly, 'Falun Dafa is good.'” - “A Practitioner's Family Member Recalls an Astonishing Scene at Tiananmen Square” (http://en.minghui.org/html/articles/2012/6/14/133959.html)

7. People Who Know the Truth Support Falun Gong in Their Ways 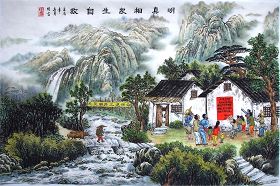 [Selected Submission] Landscape Painting: “Sentient Beings Understood the Truth and Save Themselves”

Liming is a member of the 610 Office. He held brainwashing sessions many times. Through his contact with practitioners, he learned the truth of Falun Gong. When his friend Xinming was dying from an incurable illness, he advised him to learn Falun Gong and helped him to find a practitioner to help him get started. “After Xinming practiced Falun Gong for less than one month, his grave illnesses and former diseases were cured.” - “A 610 Office Staff Member Encouraged His Friend to Practice Falun Dafa” (http://en.minghui.org/html/articles/2012/6/21/134067.html )

Two police officers went to a school and wanted to take away a teacher who was a Falun Gong practitioner. The principal said, “How can they arrest people just like that, and do whatever they want? It is interfering with our teaching responsibilities.” He went to reason with the police officers. A colleague escorted her out the side door, and she took a taxi and left. Realizing that the practitioner was gone, the officers got so angry that they wanted to arrest the principal, who said to them, “If you dare to arrest me today, I'll see you in court tomorrow.” Many other colleagues also argued with these officers. The officers then went to the practitioner's child's pre-school and took her three-year-old child as a hostage. However, her colleagues went to the police and rescued her child. - “Grateful to the Brave People Who Protected Me from the Communist Regime's Persecution” (http://en.minghui.org/html/articles/2012/6/10/133893.html)

“During the 2008 Beijing Olympics, an agent from the city's 610 Office came to my home and harassed me. A female village head who had worked together with the police many times in the past and arrested me, arrived too. As I was about to explain the facts about the persecution, the village head waved her hand signaling me to stop. She told the agent that I had become disabled because my thigh bones had become necrotic, but through practicing Falun Dafa I recovered. She said that we both come from the same village and if he didn't believe what she said, he could look at my x-rays. She continued, “You can see for yourself. Furthermore, when she had breast cancer, I personally escorted her back from the labor camp. You are being unreasonable if you stop her from practicing. ...” After listening to her, the agent left without saying anything.” - “Doctor: 'This Is Simply a Miracle'” (http://en.minghui.org/html/articles/2012/6/29/134173.html) 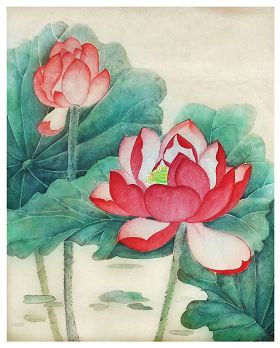 He is a young practitioner and he follows the principles of Truthfulness-Compassion-Forbearance. “One day, I was beaten by a boy in my class and he scratched my face. The teacher said to my mom, 'Today a boy in the class beat your son. I saw the fight and your son didn't fight back.' I pulled Mom out of the classroom and quietly told her, 'While he was beating me, I was thinking that one should not fight back when being punched or insulted. So I watched him beating me.'” - “A Young Dafa Disciple Validates the Fa” (http://en.minghui.org/html/articles/2012/5/30/133696.html)

“I watched the video 'False fire' at home, which exposed the lies told by the communist party, and how they framed Falun Gong. I also clarified the truth to my classmates, and most of them knew the truth. One day, my teacher said we were going to watch a science movie. However, it was the video of the 'Tiananmen square self-immolation', which was framing Falun Dafa.” He and most of his classmates refused to watch. “After class, I threw my red scarf from the building and others followed. We all said loudly, 'The Tiananmen square self-immolation is a hoax. It was made to frame Falun Gong. It was acting!' Later, my grandpa asked the teacher where she got the video and she said it was from a government agency. Grandpa asked if she would play it again, and she said no, there is no point in playing it again because even the kids know it is fake.” - “Little Practitioner Helps a Bully Correct His Behavior” (http://en.minghui.org/html/articles/2012/6/4/133779.html)

9. Musical works – Practitioners' music resonate and penetrate people's souls; they cleanse the hearts of the listeners and awaken their kindness

There are many Falun Gong practitioners who possess artistic talents. They have incorporated the goodness of Dafa, the reverence for Teacher, and the wish to awaken people's kindness in their musical works. The works are performed with western musical instruments such as orchestral organ, piano, and violin, or traditional Chinese instruments such as erhu, zither, and bamboo flute. The music is soothing, graceful, and embodies the realm of practitioners cultivating Truthfulness-Compassion-Forbearance.

The lyrics in “Orchestral Music: A Millennium of Waiting (http://en.minghui.org/html/articles/2012/5/18/133437.html)”  translate as: “The fog has dispersed, and the air is clear. The Buddha light shines on the sail that takes us home. The Fa will rectify the human world in the Spring. We've been waiting thousands of years for this day, the arrival of Falun Dafa.” Practitioners' music resonates and penetrate people's souls; it cleanses the hearts of the listeners and awakens their kindness.

In “Plum Trees Blossom, Spring Fills the Garden (http://en.minghui.org/html/articles/2012/5/18/133438.html), ” the music is pure and smooth, awakening the goodness buried in people's soul. In “Recovering My True Self (http://en.minghui.org/html/articles/2012/6/9/133869.html), ” the music reveals a cultivator's thoughts, encompassing the vicissitudes of his past, the suffering while waiting, and the joy after learning the Fa. 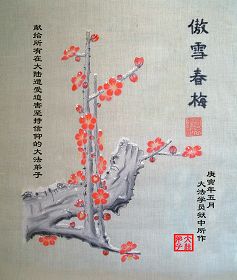 [Selected Submission] Painting: “Plum Flowers Defying the Winter, Blossoming in the Spring” by a practitioner who was illegally detained in China

The song, “After the Rain” (http://en.minghui.org/html/articles/2012/6/16/133994.html)  depicts a peaceful, soothing, open, and broad realm, reflecting the state of mind of practitioners in China. While being persecuted, they still maintain righteous thoughts and continue to save sentient beings with compassion.

“Candlelight” is to commemorate Dafa practitioners who have died as a result of the persecution. There is mourning without grief, and yet hopeful. As the lyrics say,

“Flickers of candlelight,
A bridge,
Connecting the just and kind in the world.

Flickers of candlelight,
Carrying the hopes of all,
Spreading the wonderfulness of Truthfulness-Compassion-Forbearance to the world.”

We received numerous articles about different facets of practitioners' cultivation experiences. The are many touching stories, extraordinary experiences, and kind acts by practitioners that have moved people to tears. Due to the limited space, we are unable to show them all. For those who would like to further understand and experience the miraculous and benevolent world of practitioners, we suggest the reading the original articles or meeting a practitioner in person.

Amongst the submitted works, “Falun Dafa in Changchun” (http://en.minghui.org/html/articles/2012/7/7/134325.html) , and other articles systematically recall and validate twenty years of Dafa's introduction. They provide valuable information and insight into the truth about Falun Dafa, twenty years of history of Dafa being spread around the world, and an understanding of this historical period. 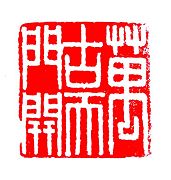 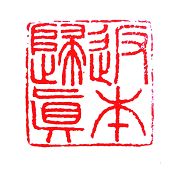 An introduction to “Collection of Falun Gong Practitioners' Experiences” relates, “Teacher changed a tradition in the world of cultivation. He spread Dafa cultivation to the secular world, revealing the profound, mysterious, and extraordinary science of cultivation. Predestined people who were suffering and lost in the illusion were finally able to find the true meaning of life. Inspired by Falun Dafa, they were awakened, and no longer fought for money and personal interests. They were no longer resentful when humiliated or when in pain. They found health and true blessings. Falun Dafa showed them a bright road ahead – to assimilate to the characteristics of the universe Truthfulness-Compassion-Forbearance.”

On November 26, 2001, Lord Francis Thurlow, a former senior diplomat of the United Kingdom, said, “Falun Gong doesn't only belong to China. It is a worldwide, new civilization spiritual movement. It represents the future of mankind. The spiritual power, moral standard, and courage of Falun Gong will spread to all of mankind and a new civilization will be born.” The Minghui website's “Call for Submissions to Commemorate the Twentieth Anniversary of Falun Dafa's Introduction” has demonstrated this as well. We hope that more people will seize this once in a lifetime opportunity.