(Minghui.org) The six-week-long 2012 Minghui Summer Camp concluded successfully on August 10, 2012. For many of the young Falun Gong practitioners, the time seemed too short. “Can I come back next year?” “I will miss the teachers.” “If only the summer camp could run longer,” said the young practitioners before they left. 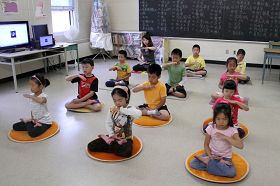 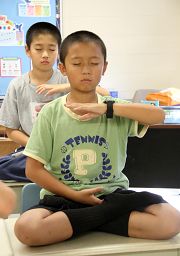 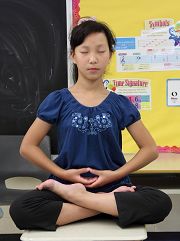 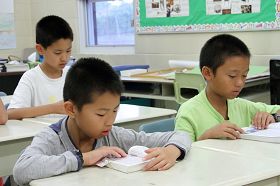 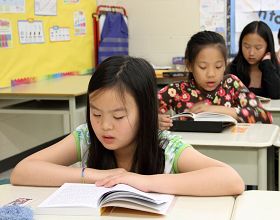 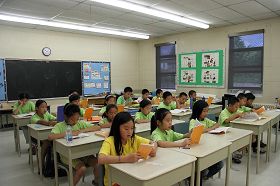 The Minghui School, formerly Doudou Garden, in Toronto was established in 2005. Every year there are about 50 participants in the summer camp. The children are young Falun Dafa practitioners from all over Canada, Japan, Hong Kong, and South Korea. Their parents are willing to come a long way so their children can have a good cultivation environment. This year's summer camp was another successful session in which the children learned a lot and had a lot of fun.

Benefiting from a Young Age

Chengcheng is ten years old. He’s been going to Doudou Garden since he was three. He goes to the Minghui School Summer Camp every year. “My mother let me listen to Teacher’s lectures before I was born. I could recite Hong Yin when I was three. I began to read Zhuan Falun when I was four. Now I can read the book myself,” Chengcheng said.

“I learn how to improve my character at the Minghui School. I performed at a community event once and a boy kept trying to take my shoes away. I was tempted to hit him, but I immediately looked within. I saw that I had the attachments of fighting, showing off, and jealousy. It was precisely that I had these attachments that the boy wanted to take my shoes. I did not want to hit him anymore and treated him nicely. He stopped taking my shoes. Later it rained and he lent me his umbrella.”

Chengcheng continued, “There was another time my mother prepared me a fabulous lunch. When my classmates saw it, they all wanted some of it. I shared all my lunch with them. When I saw the empty box and I had nothing to eat, I felt a bit disappointed. My classmates then shared their lunch with me. That was a lunch full of variety.”

Lele is ten years old too. He has been attending Minghui School since he was three. “I like the school because I learned how to be a true Dafa practitioner there,” said Lele.

Lele gave an example. One time he had a fever and did not have any appetite. He worried that he would not be able to join a Falun Dafa parade the next day. “The next day my head still hurt. My parents told me that I would be all right, so I went. Other practitioners and I distributed a lot of Falun Dafa fliers to the spectators, and many of them thanked us. I had no idea when my fever and headache disappeared during the parade. I thank Teacher for letting me recover so fast,” said Lele.

Nine-year-old Doudou moved to Toronto last year and it was her first time at the Minghui summer camp. “Being able to study and exercise with others helped me a lot. When I was by myself, I often could not finish all five exercises. When I had questions during the study sessions, the teachers helped answer my questions,” said Doudou.

Doudou began to learn Falun Dafa when she was three. Since she was five, her mother has had her read one chapter of Zhuan Falun each day. She sometimes studies Teacher’s new articles or memorizes articles in Hong Yin with her mother.

For a while, Doudou felt the practice was very difficult. Most of the time, she could not eat what she liked, buy what she wanted, or play on the computer like her other friends. Her parents always urged her to “study the Fa, do the exercises, and send righteous thoughts.” “I forced myself to do what they wanted, but in my mind I was somewhere else.” Joining Minghui School changed her reluctant attitude toward the practice.

“In the summer camp, the teachers taught us how to make things by hand. We painted and did paper cutting art. It was very meaningful. When I had conflicts with other students, teachers would remind me to think about it based on the Fa and see what I did wrong. It allowed me to improve myself,” Doudou said.

Chenchen just came from China. She’s ten years old. “My mother told me that she taught me how to read Zhuan Falun when I was one. By the age of five, I could read the book all by myself. I could do the second exercise for 30 minutes when I was four years old. But as I grew older, I could not do it so long. After I joined Minghui School, I was able to keep going for 30 minutes again.”

“Every morning when we did the exercises, I could feel the strong energy. When I did the third exercise, it was so easy for me, as if my hands were floating by themselves. I felt very comfortable.”

She said that she could do the sitting meditation for 50 minutes now. When her legs hurt, she told herself, “If I take my legs down, that piece of karma will not be eliminated. I will take my legs down after my legs stop hurting.” This way she was able to persist for a few more minutes.

Now Chenchen can do one hour of sitting meditation with her mother every night. Sometimes it hurt so much that she cried, but she was able to persevere. She felt very blessed and happy being able to be with other practitioners outside of China. She will cherish the new environment. 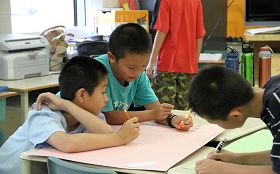 Young practitioners work together to finish an assignment in the summer camp.

This was Maria’s first year teaching at Minghui School. She teaches ages 6-8. She was most impressed by a student named Christ when he told her, “I think we do not study the Fa enough.” Some of the students do not know Chinese at all while others have been studying Zhuan Falun with their parents since they were little. In order to take care of those who did not know Chinese, Maria had the class read the book slowly. What Christ told Maria enlightened her that the pure nature of young children knew that they must study the Fa more.

Christ was a very kind child. He always cared about others and was very considerate. He is the head of his class now, and he often organized the class to play together.

One time Maria wanted to give a prize to Christ because he took Fa study seriously. Christ told her, “I don’t want this prize. I think studying the Fa carefully is what I should do.” Maria was moved to tears.

Maria had something that she wanted to share with the parents. She hopes that parents can teach their children Chinese when they are little. “Teach them Chinese and let them read Zhuan Falun even if for only ten minutes a day. You will see the results after you have persisted for a while. This is what I did with my child, who is ten years old now. She is now very curious about traditional Chinese stories and books, and it is easy for her to comprehend the meaning.”

“The Children Are Changing, and So Am I.”

Judy teaches children ages 3-5. This was her first year at Minghui School. “As the children are changing every day, so am I. I learned a lot from these pure children. It is hard work, but well worth it,” said Judy.

July tried to be very patient with the students and explained the Fa principles to them with language they could understand.

Four-year-old Allen did not know how to share with other students at first. He also refused to follow rules. He was very self-centered, “I want this…. I don’t want that…” Through Fa study and memorizing Lunyu and Hong Yin poems, Allen gradually changed. Now other students want to play with him.

The youngest student was three-year-old Diandian. He was very energetic and only wanted to play. He did not like to study the Fa or do the exercises. After the six-week summer camp, he now can memorize Hong Yin poems and is willing to study the Fa and exercise with other students. Now he is the first to raise his hand when the teacher asks who can recite Hong Yin poems in front of the class.

Parents Need to Help Their Children in the Practice

Ms. Xia has been teaching since 2005. Her students are from 9 to 11 years old. The students love her.

In her long teaching experience, Ms. Xia saw that the students spent most of their time in the ordinary society, and, as they grew older, they learned many bad things. Though in Minghui School, they can quickly correct their wrong behaviors, Ms. Xia still wants to remind the parents that they must pay attention to their children’s practice.

“It is definitely not enough to just let the children spend six weeks a year in Minghui School. The parents must spend time and effort helping their children in the practice on a regular basis. They have to persevere in studying the Fa and doing the exercises with their children every day. The children will avoid bad behaviors only when they are in the Fa. Otherwise, they are easily tainted in the ordinary society. I hope to see them make big progress next year,” Ms. Xia said.

“Letting Go of the Attachments of Greed and Desire”