(Minghui.org) On the evening of March 5, 2002, Falun Gong practitioner Mr. Liang Zhenxing and others tapped into Changchun City's cable TV network to air videos to help educate people about the facts regarding Falun Gong. As a result, he was sentenced to 19 years in prison. He was incarcerated in Jilin Prison, Tiebei Prison, Shiling Prison in Siping City, and Gongzhuling Prison. In each location he was cruelly tortured, including being beaten every day and having toothpicks hold his eyelids open so that he could not sleep at night. After eight years of imprisonment and brutal torture, Liang Zhenxing was ultimately tortured to death in Gongzhuling Prison Hospital on May 1, 2010; he was only 46 years old.

The following is an eyewitness account by a practitioner who was detained with Mr. Liang.

When I was sentenced, I was transferred to Shiling Prison at Siping Prison in 2007. It was the most brutal period in the persecution of Falun Gong practitioners. I was assigned to the third division, where the infamous guard, Yang Tiejun, worked. Instructed by Yang Xichen, the criminals kicked and beat me brutally, loosening my teeth and making it difficult for me to eat

While I was there, I witnessed what was done to Mr. Liang Zhenxing. Even now it is still difficult for me to describe in full the brutality of the torture he suffered.

Every day while the inmates were forced to do hard labor, Mr. Liang had to face the wall with one of his feet cuffed to a bed, so that he was unable to move even a little. Four criminal inmates were assigned to constantly monitor him, and even his roommates were not allowed to interact with him. One day when I looked at the name card on his bed, the criminal who was monitoring me punched and cursed me. He snapped that, in the future, whatever happened, I should not look at Mr. Liang. Only then did I realize that it was Liang Zhenxing. 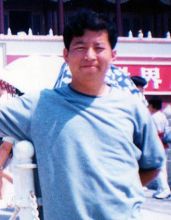 Because Mr. Liang did not commit any crime, he refused to participate in forced labor, so the guards used all kinds of despicable tactics to try to force him to give up practicing Falun Gong, but their efforts were in vain. The guards throughout the prison coordinated on how to persecute him. At the lowest level they arranged a few of the most violent criminals to torture him. These criminals carried out in countless methods of torture. The thug who was most actively involved was Yan Dequan, and he was the one who tortured Mr. Liang to death.

They tied Mr. Liang to a bed. They had prepared a bed urinal for him, but later they took it away. In order to avoid having to go to the toilet, he seldom drank water. When they felt the least bit unhappy, they kicked and beat him furiously until they felt satisfied. During the daytime, we went out to do forced labor, so we were unable to see how they tortured him. When we came back to the ward in the evening, we only witnessed a little of what Mr. Liang endured.

One time, Mr. Liang refused to cut his hair (the detainees were shaved bald once a month). In order to force him to comply, the criminals who monitored him first punched his genitals, causing him to sweat and making him unable to walk. Then Yan Dequan kicked and beat Mr. Liang until he was too tired to beat him any more. Mr. Liang's face was covered with blood and his nose and mouth were bleeding. Every month they first tortured him this way and then cut his hair. Due to the long-term persecution Mr. Liang's hair was very sparse, his face became pale, his voice became hoarse, and he was extremely weak. He looked like an old man. These episodes of abuse took place almost every day. Yan Dequan was the key person who tortured Mr. Liang every day, and he was directly instigated by guard Yang Tiejun.

Later Gao Minglong took over Yang Tiejun's position. He was also very vicious. He prepared a whip and whipped Mr. Liang every day, from a few times to dozens of times.

On April 25, 2008, because Mr. Liang did not wear the prison uniform, Gao Dequan summoned Yan Dequan and several others to torture him. They punched him to the ground and hit him with the soles of their shoes. Rows of sole marks covered his body from front to back. A few days later his body began to swell, and he was covered in large welts. I could not bear to see this. After a few days of witnessing Mr. Liang being tortured this way, I could not sleep all night.

Guard Yang Tiejun used a few electric batons to shock Mr. Liang until he fell down. Then they pulled him back to the ward and tied him to a bed and tortured him again. One night when I went to the toilet, I saw criminal inmate Zhu Yonghua had used toothpicks to hold Mr. Liang's eyelids open so that he would not be able to sleep. In the daytime when he had just dozed off, criminal Yang Jianguo hit his head hard from the back and then immediately left. When he dozed off again, Yang beat him again. I do not know how many times these things happened. After seeing how horribly he was treated everyday, I knew there was more of this kind of torture he was subjected to that I did not see. 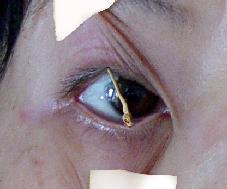 One time when Mr. Liang shouted “Falun Dafa is good!” Yan Dequan and other criminals held his head, struck at his throat with the palms of their handsm and then brutally kicked his chest, severely injuring his lungs. After being tortured this way for several days, Mr. Liang was unable to eat or speak. Only when he was near death did they finally take him to the hospital. One month later he was out of danger.

In 2009, Mr. Liang insisted on protesting the persecution. The guards used different methods to torture him, and Mr. Liang's physical condition declined rapidly. At that time the guards were afraid he would die there, so they transferred him to Jilin Prison. Two months later we heard the sad news that he had been tortured to death.

Above is what I witnessed when I was detained with Mr. Liang. This is only a small sampling of what went on. Many accounts of the torture and mistreatment practitioners have been subjected to are unknown, but one day they will be fully exposed. Many times when I saw him suffering and in tears, my heart was also in tears!

“Wonders of Falun Dafa Experienced in My Life”