(Minghui.org) On August 17, the Washington DC Falun Dafa Association held a press conference at the National Press Club. The association made an urgent appeal to the international community, governments of all countries and media outlets, calling for investigation of the Chinese Communist regime’s atrocities of harvesting organs from living Falun Gong practitioners. 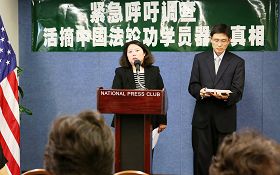 In the past week, Chinese and English media outlets uncovered stories behind the case against Bo Xilai and his wife Gu Kailai for the murder of British businessman Neil Heywood. According to the Epoch Times, the key issue of the case has been covered up. That is, that Bo and Gu were heavily involved in harvesting organs from living Falun Gong practitioners, selling organs and corpses of those practitioners for profit. Reports say that the real reason for Heywood's murder was because of his knowledge of these crimes. Out of fear of being murdered for the same reason, Wang Lijun, former Chongqing Deputy Mayor, sought asylum at the US Consulate in Chengdu and provided a large amount of evidence of organ harvesting and other crimes to the US government.

At the press conference, Terri Wu, spokeswoman for the Washington DC Falun Dafa Association, urged the international community, governments of all nations, and media outlets to investigate the atrocities of harvesting organs from living Falun Gong practitioners, and called on the Chinese Communist regime to open all labor camps, prisons and related detention facilities for international investigation.

Ms. Wu said: “While Beijing Public Security could not send those practitioners to their hometowns and detention facilities in many provinces were packed, the Chinese Communist regime transferred those practitioners to newly formed concentration camps and underground prisons. Consequently, these practitioners who were mostly from Northeast and North China disappeared… Under the policy that 'deaths of Falun Gong practitioners will be recorded as suicide or natural causes,' practitioners became the targets for organ harvesting because of the huge profit involved.” 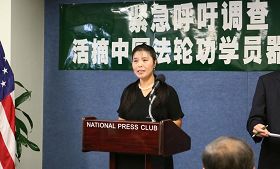 Practitioner Ma Chunmei came from Northeast China. She was arrested four times and twice detained at the notorious Heizuizi Women's Labor Camp in Changchun City, experiencing all kinds of physical and mental torture. Ma said that she was tied to small wooden bed for three days straight, with each of her limbs tied to four poles of the bed. She could not move and was not given even one drop of water. It was so painful that she felt that she was dying. In addition, she also went through many other forms of torture, including electric shock torture.

She said: “My fellow practitioners Feng Yanxi and Zhao Lianhua were dying after a short time in the camp. We did not know how the camp tortured them, as we could not see any cuts or injuries on their bodies. After they lost consciousness, they were taken out and never returned. Their whereabouts remain unknown as of today. I am afraid that they died and it is very possible that they were killed for their organs.” 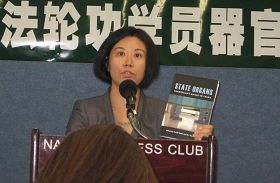 Dr. Crystal Fang, a representative of Doctors Against Organ Harvesting (DAFOH), introduced the book State Organs at the press conference

Dr. Crystal Fang from Doctors Against Organ Harvesting (DAfOH) introduced a new book State Organs at the press conference. The book was edited by the founder of DAFOH, Dr. Torsten Trey, and renowned human rights lawyer David Matas. After Davis Matas and David Kilgour’s book Bloody Harvest, the Killing of Falun Gong for their Organs, this is the second publication about the organ harvesting atrocities in China.

This book collected several manuscripts of renowned doctors in the organ transplant field. These papers analyzed the Chinese Communist regime’s atrocities of harvesting organs from prisoners of conscience, especially Falun Gong practitioners, and appealed for action from the international community.

For example, after learning about the organ harvesting atrocities in China, Israel doctor Jacob Lavee urged his country to pass a new organ transplant law to prevent Israeli citizens from going China for organ transplantation. Writer Ethan Gutmann did his own investigation using a methodology different from Matas and Kilgour. He estimated that 65,000 practitioners have likely been killed for their organs. His estimation was close to the findings of Bloody Harvest.

Ms. Fang quoted George Weigel, a distinguished Senior Fellow of the Ethics and Public Policy Center, who called it “government-run Chinese medicine, which has become a lethal enterprise.”

She said: “Medicine should be a profession of trust by people and built upon a solid moral standard. This is especially important for the profession of organ transplantation. Doctors are supposed to save people. How can they take part in organ harvesting?”

On May 24, 2012, the US Department of State issued the 2011 human rights report, which noted that media outlets and human rights groups had reported cases of harvesting organs from living Falun Gong practitioners in China.

On July 25, the day after the Sino-American Human Rights Dialogue, Michael Posner, Assistant Secretary of State for Democracy, Human Rights, and Labor, was asked if the materials from Wang Lijun included information about organ harvesting of Falun Gong practitioners. Posner did not give a straight answer. But he said that reports from the US Embassy to China and State Department had enough information.

It is also worth noting that since June 2011, the US Department of State added a new question in its non-immigrant visa application form DS-160: “Have you ever been directly involved in the coercive transplantation of human organs or bodily tissue?” 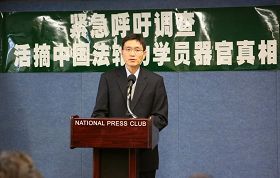 Conference host Dr. Huang calls for action from the international community to end the atrocities

Dr. Huang, host of the press conference, commented: “After the World War II, people found out that the Nazi regime killed over 6 million Jews. People from all nations then pledged: 'Never Again!' Can we let history be repeated? Please go to China to investigate! We want to see immediate action to stop this crime against humanity!”

“What I Saw in Other Dimensions after Destroying CCP “Commitment Cards””