Los Angeles, USA: Practitioners Call for an End to Persecution on the 13th Anniversary of the Peaceful Resistance (Photos)

(Minghui.org) On July 20, 1999, former Chinese Communist Party (CCP) leader Jiang Zemin launched a brutal persecution of Falun Gong, creating the largest human rights disaster in China. On the evening of July 20, 2012, Falun Gong practitioners and their supporters in Los Angeles held a candlelight vigil in front of the Chinese Consulate to call for an end to this 13-year persecution. 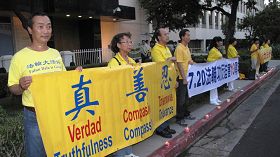 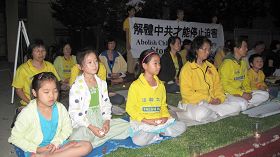 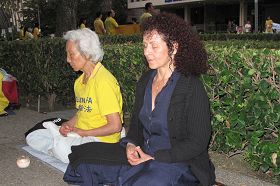 Mr. Wu Yingnian, spokesperson for Falun Gong in Los Angeles, said that over the past 13 years, 3,547 practitioners have been verified through civil channels to have died as a direct result of the persecution. Among them, many were tortured to death in prisons, detention centers and forced labor camps. Tens of thousands of practitioners have been sentenced to forced labor and prison, and countless practitioners have been incarcerated in brainwashing centers, where they are subjected to severe mental and physical torment in attempts to force them to renounce their belief. At the same time, with the continuous efforts of practitioners around the world to raise awareness about the persecution, the overall situation has changed greatly. No matter whether inside or outside the Communist regime, and among officials at various levels of government and even ordinary citizens, more and more people have become sympathetic toward Falun Gong practitioners. Mr. Wu believes that the persecution of Falun Gong won't last long, and he hopes that more people will stand up to protect Falun Gong practitioners.

Practitioner Albert Roman shared the news that as of July 19, 2012, 120 million Chinese people have renounced the CCP and its affiliated organizations. Ordinary Chinese citizens have stood up to oppose the persecution, with thousands of people signing petitions to call for the release of illegally detained Falun Gong practitioners.

In the U.S., people have become more and more concerned over the human rights abuses happening in China. Prior to July 20, the Carson City Council in Southern California passed Resolution No. 12-076 with a 5 to 0 vote, opposing the CCP regime in their persecution of Falun Gong practitioners and other groups of people in China.

Mr. Liu Yinquan, Chairman of the Central Committee of the Chinese Socialist Democratic Party, participated in the rally and said, “To resolve the problems in China, the persecution must stop. People should be able to freely practice, and value Truthfulness-Compassion-Forbearance. The social moral standards will improve, and other problems will be surely resolved accordingly.”

Ms. Zhu Yurong is a former associate professor at a key university in China. She was once arrested for doing the Falun Gong exercises outdoors and participating in group exercises indoors before she came abroad. She called on her former classmates, teachers, colleagues and friends, particularly those working in the scientific and technological fields, to earnestly learn the truth about Falun Gong, read the Nine Commentaries on the Communist Party, and make a wise decision to quit the CCP and its affiliated organizations.

“San Francisco: A March and Rally to Raise Awareness on the 13th Anniversary of Practitioners' Peaceful Resistance (Photos) ”