(Minghui.org) On June 27, 2012, the Provincial Council of Florence, Italy unanimously passed a resolution on the protection of religious freedom in China. It calls for an end to the persecution of Falun Gong, and an investigation into the disturbing reports of organ harvesting from living Falun Gong practitioners. The resolution was drafted by Massimo Lensi, member of the People of Freedom Party. 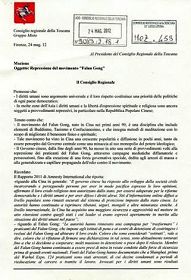 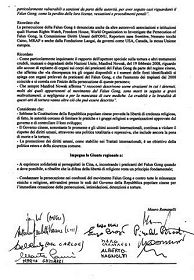 Provincial Council of Florence, Italy unanimously passes a resolution calling for an end to the persecution of Falun Gong

On May 23, 2012, the Czech Senate Committee on Education, Science, Culture, Human Rights, and Petitions discussed a proposal on ending the persecution of Falun Gong in China. The members present reached an unanimous agreement to call for a stop to the persecution, and passed a resolution.

Chairman of the Committee Dr. Jaromír Jermář read out the resolution at the meeting.

The resolution demanded that the Chinese Communist Party (CCP) lift the ban on Falun Gong, dissolve the 610 Office, stop the persecution of Falun Gong, and release the detained practitioners and prisoners of conscience.

According to the resolution's fifth point, the government and the President of the Czech Republic would be urged to hold talks with the CCP on the issue of ending the persecution of Falun Gong.

Practitioner Mr. Wang Xiaodong, 42, is a college graduate and a teacher. He was arrested by police from the National Security Division of the Botou City Public Security Bureau at the end of February, 2012. His arrest was a source of outrage for the entire village. Three hundred families in his village signed a petition and submitted an appeal with thumbprints, demanding that the Procuratorate release him. This shocked the high officials in the Chinese Communist Party (CCP). 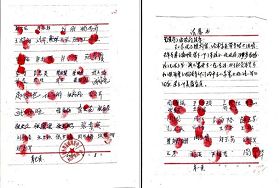 The appeal letter with 300 thumbprints, demanding that the Procuratorate release Wang Xiaodong.

On May 29, 562 village citizens in Tanghai County, Hebei Province submitted an appeal with thumbprints, demanding to release Falun Gong practitioner Zheng Xiangxin. Recently, Qin Rongqian from Heilongjiang tried to bring the murderers to justice, who tortured her father Qin Yueming, a Falun Gong practitioner, to death in the jail. More than 15,000 local people in Heilongjiang province signed the petition expressing their support. 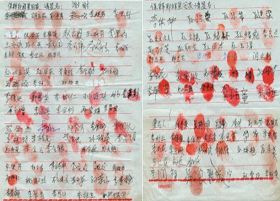 The appeal letter with 562 thumbprints, demanding that the Procuratorate release Zheng Xiangxing. 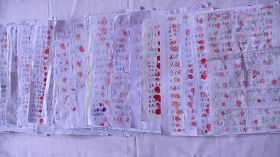 In 2011, 2,800 villagers from Changli County, Hebei province supported Zhou Xiangyang, a local Falun Gong practitioner, to sue the local government for torturing him. After Zhou's wife Li Shanshan was arrested by the government, 500 people signed a petition, demanding her release.

Support from the International Community

On July 24, 2002, with a sweeping vote of 420-0, the U.S. Congress unanimously passed Concurrent Resolution 188, a comprehensive resolution that addresses the scope and breadth of the persecution in China, as well as the illicit activities carried out by agents of the Chinese regime in the United States as they attempt to persecute Falun Gong in America. The resolution also reiterates the peaceful nature of Falun Gong. On October 24, 2002, the Canadian Parliament also passed a similar resolution supporting Falun Gong. On October 4, 2004, the U.S. Congress and Senate House passed the Resolution 204, requesting the CCP to stop the persecution of Falun Gong, and release all jailed Falun Gong practitioners. On June 20, 2005, the Australian Senate House passed Resolution 170, stating that Australian citizens have the freedom of practicing Falun Gong, and the Australian government will protect them from being harassed.

In a bi-partisan letter sent to U.S. President Barack Obama on July 8, 2009, 61 members of the U.S. Congress noted that the campaign against Falun Gong in China represents “one of the most unjust and cruel persecutions of our times.” The letter urged President Obama to “speak very clearly and specifically” in support of Falun Gong practitioners in China. On July 29, 2009, the City Council of Chicago, the third largest city in the United States, passed a resolution. The resolution stated: "the United States should condemn the ongoing persecution of Falun Gong, and make all efforts to end immediately the persecution of Falun Gong in China." "It is also our responsibility as human beings to raise awareness necessary to stop horrific crimes against our fellow human beings no matter what the cost."

The resolutions from the U.S., Canada, Europe and Australia have shown that the truth of the persecution has been spread all over the world, and international society has chosen to support Falun Gong.

“Korean Practitioner: I Obtained the Most Precious Falun Dafa”

“Editorial: One Can Only Cultivate by Being Rational and Clearheaded”