(Minghui.org) A rally was held downtown at Clarence Square at noon on June 9, 2012, to celebrate the more than 117 million Chinese people who have quit the Chinese Communist Party (CCP) and its affiliated organizations. In the afternoon, a grand parade passed through Chinatown for almost two hours, attracting the attention of many people.

At the rally, 21 people received their certificate for quitting the CCP. Some of them also shared publicly how they learned about the wave of withdrawals. 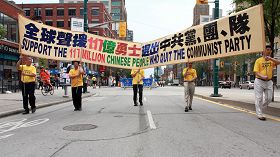 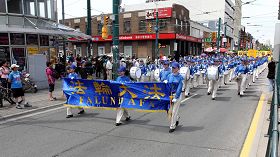 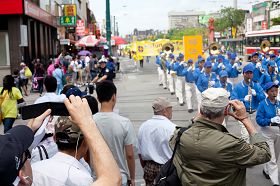 Spectators take photos of the parade in Chinatown 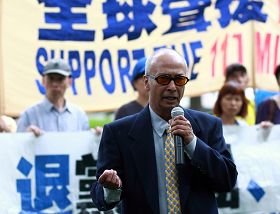 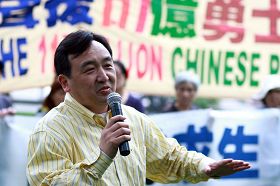 Quit the CCP and Find the Way Back to Human Dignity

Su Ming, Chinese historian and news commentator, said at the rally, “Close to 120 million brave men and women have told the world through their actions that the Chinese people are quickly awakening.”

Su said that in the past 60 years, the CCP has strangled the freedoms of the Chinese people and suppressed their minds. “The Chinese people are forcibly instilled with the CCP’s ideology and hence China has become the most corrupt country in the world, with most the counterfeiting and the most vicious officials.”

He encouraged the Chinese people to continue quitting the CCP organizations.

Clement Rodrigo, leader of the Toronto South Asia community, had a hard time understanding why the CCP ruined China’s 5,000 years of rich culture. He was touched by the persistent efforts of Falun Gong practitioners in clarifying the truth to end the persecution. Mr. Rodrigo always saw practitioners delivering Falun Dafa fliers in Chinatown, even in extreme weather conditions. “This really touches me. The CCP is at its end because evil shall not last.”

Quitting the CCP Is the Best Choice

Shi Tao is the host of a show on NTDTV. “I have often told my audience that the year of 2012 is the year of truth,” said Shi. “As the truth reveals itself, people need to choose and choosing to quit the CCP is the right thing to do.”

Testimonies of Those Who Quit the CCP

Weng said that he did not know about the persecution of Falun Gong until after he came to Canada. “The things I see and the news I read in Canada are completely different from what I got in China. The CCP has exhausted an enormous amount of financial resources to persecute good people. In the past few months, there have been a lot of dramatic changes in China’s politics. The truth about Falun Gong is coming out and people in China can feel that something historic is coming.”

Tsai quit the CCP seven years ago. He learned about the evil nature of the CCP from Falun Gong informational materials. “The CCP is an evil spirit that goes against the universe and humanity and therefore everyone needs to quit it.”

When he was ten years old, Li witnessed how his mother’s health miraculously improved through practicing Falun Gong. He also witnessed how his mother has survived the 13 years of persecution with her strong will. “I practiced Falun Dafa when I was ten. I changed so much after that. I stopped fighting with my classmates and getting into trouble. I was quiet and peaceful.”

“After the persecution started in 1999, the police took my mother. The propaganda on the state media intensively slandered Falun Dafa. I dared not tell my friends about my practice anymore. My mom was sent to various prisons, labor camps, and detention centers. She still looks young and her hair is still dark. She did not cave in and she survived with her firm belief in Falun Dafa,” said Li.

Calls from China to Show Support

Hu Junxiong from Hubei Province called to encourage people. “I know many people still have not recognized the evil nature of the CCP, and many more have not quit for the sake of personal interest or their fear of the CCP’s persecution. I hope they recognize the trend and conquer their fear to quit the CCP organizations.”

Zhang Junwei from Shanghai called to thank the overseas Chinese people for their activities to support the Chinese people quitting the CCP. “They have helped people in China realize the true face of the CCP and break away from the CCP mentally.”

Zhang continued, “The CCP’s stupidity drove it to persecute Falun Gong and dig its own grave. The persecution exhausted the CCP’s vitality and destroyed its popularity with the people. The CCP could never have imagined that it would end because Falun Gong practitioners encouraged the trend of quitting the CCP.”

Bystanders: It Is Worth Celebrating

The parade was led by the Divine Land Marching Band, made up of over 100 Falun Gong practitioners, followed by a float, a lion dance team, and other supporters. The Waist Drum Band was at the end of the parade. Many bystanders were busy taking pictures of this grand march.

Wang, an immigrant from China, sighed and said, “It’s peaceful and worth celebrating” when he learned that 117 million people have quit the CCP organizations.

Joanne from Quebec thought the practitioners were very brave. “The protest of a mass number of people can change things. It’s a peaceful way to do it.”

Liu has seen Falun Gong’s parades several times. He was excited and moved, “It’s uplifting to be able to see something like this in a free and democratic country.”

Eve was drawn to the parade because it was “colorful and brilliant.” “I know that they have been firm believers of their practice. I have supported them all along,” she said. When she learned that 117 million people have quit the CCP, she said, “It’s the best thing. The Chinese people deserve their freedom.”