(Minghui.org) Mr. Lu Kaili was an engineer at the Dalian Heavy Industry Group Co. Due to the torture and abuse to which he was subjected while being detained, Mr. Lu became paralyzed. On May 8, 2012, he was transferred to Jinzhou Prison and detained in the prison clinic. Four inmates were assigned to watch him. His family has been denied permission to visit him. His current situation is unknown. 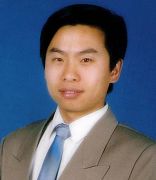 Mr. Lu Kaili before he was sent to prison

Suffering for His Belief

Since the Chinese Communist Party (CCP) started persecuting Falun Gong in July 1999, Mr. Lu Kaili and his wife Sun Yan have been persecuted several times because they remained steadfast in their beliefs.

Thirteen days after he was released, Mr. Lu was arrested again, and once again subjected to forced labor. He was detained in No. 8 Division of Dalian Forced Labor Camp. Because he refused to do slave labor and started a hunger strike to protest the persecution, he was force-fed by guards Jing Dianke and Song Hengyue. They once force-fed him two bottles of a strong Chinese alcoholic beverage, which caused him to become unconscious for 24 hours. Inmates used a bed board to beat him, and tied both his hands and feet to a dead man's bed for several months. He was detained in Dalian Forced Labor Camp until October 2003.

On October 13, 2005, Mr. Lu and some other practitioners were secretly arrested by officers from the Dalian Domestic Security Division. He was beaten and later sent to Liaoning City Detention Center. In April 2006, Mr. Lu was sentenced to ten years of imprisonment by a Liaoning City Court. He was detained in the No. 2 Division of Yingkou Prison and transferred to the No. 5 Ward of Panjin Prison on December 20, 2007.

Paralyzed as a Result of Being Tortured in Panjin Prison

Mr. Lu was tortured with several high-voltage electric batons at 9:00 a.m. on April 6, 2010, by guards Li Feng, the No. 5 Ward head, and Wang Jinlin from the Investigation Section. They tortured him until 11:00 p.m. and then held him in a small isolation cell for 15 days. His entire body was covered with wounds from the electric batons and handcuffs.

In late June 2010, Mr. Lu refused to do slave labor. Three days later, Guan Fengchun, head of the Education Division, Wang Hui, head of the “education section,” along with prison guard Qin Fei, tortured him with electric batons from 1:00 to 4:00 p.m. They continued torturing him every day from July 9 to July 14.

Guan Fengchun tortured Mr. Lu with an electric baton for four hours on August 24, 2010. At approximately 6:40 a.m. on August 30, Mr. Lu fell from the second floor of the workshop building and was seriously injured.

The guards later tried desperately to cover up the truth about how they had persecuted Mr. Lu. They isolated him and didn't allow his family to visit him. When his family heard the news and inquired about his condition, the guards still tried to hide the truth.

On November 9, 2011, 14 months after Mr. Lu was injured, his family was finally allowed to see him. He was not able to move his lower limbs at all. He had multiple fractures in his lumbar vertebra, sacrum, and ankles, and the nerve in his tailbone was damaged. Steel rods had been installed in his ankles and lumbar vertebra. He had to use his fists to support his body in order to move around, and there were thick calluses around his finger joints. Due to his injuries and nerve damage he had lost the ability to control his bowel movements.

Mr. Lu's mother passed away while he was detained. She had been under great stress and anxiety, worrying about him for long time. His sister, Lu Lirun, was sentenced to three years in prison in May 2010 because she clarified the truth about Falun Gong. She is still detained in Chuangsun Women's Prison. His wife and other family members have been to Panjin prison again and again, attempting to have him released.

Falun Gong practitioners who were being held in Panjin Prison were transferred to other places in Liaoning Province on May 8, 2012. Mr. Lu Kaili and four other practitioners were sent to Jinzhou Prison. Mr. Lu was detained in the prison clinic. When his family received the news and went to Jinzhou Prison to visit him, they were not allowed to see him unless they brought a paper from the local police station stating that they did not practice Falun Gong.

Prison deputy head Wang Xue told the family members, “It will be hard to 'transform' an inmate if his family supports Falun Gong,” and he refused to give them permission to see Mr. Lu. It is said that the Falun Gong practitioners in Jinzhou Prison are currently being subjected to a wave of intensified forced brainwashing. Each practitioner is watched by four inmates and is not allowed to sleep or be visited. At this time, Mr. Lu's condition is unknown.

“A Family's Anguish: One Daughter Died as a Result of Persecution, Another Daughter and Daughter-in-law in Detention (Photos) ”