Did Too Many People Attend the “April 25 Appeal”?

This article was first published in April 2011.

(Minghui.org) Twelve years ago, on April 25, 1999, more than ten thousand Falun Gong practitioners went to the Office of Letters and Appeals in Beijing, to assert their basic rights of belief. The practitioners were highly self-disciplined during the process, very peaceful and rational. It was the largest appeal in Chinese history. However, several months later, the regime's propaganda machine had turned the peaceful appeal into a “siege” in attempts to justify the persecution in the minds of the people. 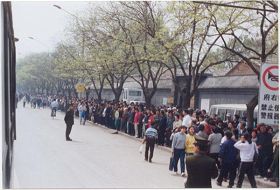 Ten Thousand Petitioners Is Not Too Many

Those people who used to think along the lines of Party culture might agree with the CCP's excuse - that too many practitioners went to appeal. Had the incident of the Tianjin police unreasonably beating and illegally detaining the practitioners happened in a society with a sound legal system, perhaps only one petitioner would be enough to obtain a just solution. Any country's constitution should protect the basic rights of its people; but the situation in China is totally different. We have to admit the simple fact that political power overrides the laws in China. The Chinese people have already lost confidence in the CCP's long-term dictatorship.

Even so, with great compassion and tolerance, Falun Gong practitioners still decided to appeal to the government and rationally present the facts, hoping the problem could be solved peacefully. Falun Gong had already spread widely in China at that time – millions benefited from the practice. The practitioners didn't want to see more unjust treatment from the government; some of them voluntarily went to the State Appeals Office to explain the truth of Falun Gong.

According to a Xinhua News Agency report, there were seventy to eighty million practitioners in China at that time, so ten thousand of them appealing represents just a tiny fraction.

To appeal to the government, the practitioners didn't compromise the political powers, nor did they resist violently. Actually, the way they chose to appeal reflected exactly their cultivation levels and compassionate attitude. They gave the government officials sufficient time to understand Falun Gong and make the right decision. The ten thousand practitioners who went represented millions of practitioners' wishes and pursuits. In this regard, ten thousand is a small number.

Several months after the appeal, the CCP twisted the facts and began to widely broadcast through its mouthpiece that ten thousand Falun Gong practitioners "besieged" Zhongnanhai. The way the CCP framed and suppressed the peaceful “April 25 Appeal" also revealed to the world that the Party's evil nature wouldn't change, even when they were facing the most peaceful petitioners who only asked for their basic constitutional rights. In fact, not only Falun Gong practitioners but also laid-off workers, victims of toxic food poisoning and those from the 2008 earthquake and activists, none of those groups who are under the CCP's persecution have the basic right to appeal.

For Chinese people, to appeal to the central government has always been a basic human right widely recognized throughout Chinese history; but nowadays, the CCP doesn't even grant Chinese people this right. A banner “Cracking down on illegal appeals” was put on a bus in Hubei Province. And in Henan Province, banners reading, “If you go to appeal, you'll regret for the rest of your life”. Other messages, such as "If you go to appeal once, you'll be severely reprimanded; if you appeal twice, you'll be detained; and if you appeal three times, you'll be sentenced to a forced labor camp” were also seen here and there.

According to CCP rules, it has become illegal to appeal to the government. From this point alone we can see what a human right disaster the CCP has brought to the Chinese people.

It has been twelve years since the communist regime began to persecute Falun Gong. At the beginning three policies were pronounced regarding practitioners, “to ruin their reputations, bankrupt them financially, and destroy them physically.” However, hundreds of tortures and nationwide brainwashing centers didn't eliminate Falun Gong practitioners even at the darkest hour.

On the contrary, Falun Gong has spread to over 100 hundred countries worldwide. After the practitioners at home and abroad persisted in spreading the truth for the past 12 years, more and more people have understood the truth and recognized the true nature of the CCP.

The peaceful appeal twelve years ago is not only a moral monument, but also set the best example for the Chinese people to express their resistance to CCP tyranny and to uphold their own rights.