US Congressman Kenny Marchant from Texas Honors May 13, 2012, as Falun Dafa Day

(Minghui.org) May 13, 2012, marked the 20th anniversary of the introduction of Falun Dafa to the public and the 13th World Falun Dafa Day. Falun Dafa practitioners from Dallas-Fort Worth area, Texas, celebrated the special occasion at the Russell Creek Park on May 6, 2012. U.S. Congressman Kenny Marchant from Texas presented the following Congressional Record honoring May 13, 2012, as Falun Dafa Day in the 24th Congressional District of Texas.

In the House of Representatives

Proceedings and Debates of the 12th Congress, First Session

Hon. Kenny Marchant of Texas in the House of Representatives

Mr. Speaker, it is with great pride that I recognize Falun Dafa, also known as Falun Gong, is a peaceful self-improvement practice rooted in ancient Chinese culture that centers around the universal principal of Truthfulness, Compassion and Forbearance.

Master Li Hongzhi, the founder of Falun Dafa, has helped millions across world improving their health and moral stands, as well as deepen their understanding of life, humanity and the universe, through the practices of Falun Dafa.

Falun Dafa has touched the lives of more than 100 million people in over 80 countries.

Falun Dafa was first introduced to the public in 1992 in China and was introduced to Dallas-Fort Worth in 1996. Since then, many free introductory workshops have been held in public places such as city libraries and public parks, and practitioners have participated in many community events. 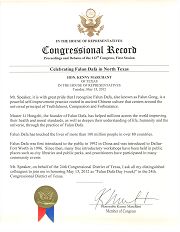