(Minghui.org) Mr. Lin Chongqi is a factory owner in Suao Township, Taiwan. Mr. Lin was subjected to psychological pressure from his grandfather during his childhood. He could not describe the hatred and fear that he experienced in his life, but felt that life was painful. Nothing could make him happy. He questioned the meaning of life and had no sense of self-worth.

Mr. Lin's life completely turned around after he started practicing Falun Dafa in 1997. From the teachings of Falun Dafa, Mr. Lin understood the meaning and direction of life. He understood that everything has a cause, and he completely eliminated his several-decades-long hatred toward his grandfather. Mr. Lin's wife and two daughters also became Dafa practitioners. Later, Mr. Lin's parents, brother, two uncles and an aunt also became Dafa practitioners. 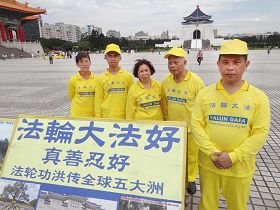 Mr. Lin Chongqi (right) and his wife, brother and parents (left to right) at Ziyou Square, Taibei, after a local activity “Celebrating 20 Years of Falun Dafa.”

Mr. Lin's family resided in Suao Township, Yilan County, Taiwan. His grandfather was the head of their three-generation household and controlled the household's finances. Mr. Lin's father is the eldest son, and he worked for the family business. However, Mr. Lin's grandfather still completely controlled the family's finances and only gave Mr. Lin's father a small salary, even after the father married and had children. When Mr. Lin was 5 years old, his parents started their own business. They started small and the business grew. Even though they became financially independent, his parents still lived in Mr. Lin's grandfather's household.

Mr. Lin is the first grandson, and in traditional Chinese culture, the first grandson in the family has special status in the household. However, at the Lin residence, when the grandfather got upset, no one in the family could escape his temper. What worried Mr. Lin the most was that his grandfather's temper was extremely unpredictable—his anger could explode anytime. Therefore, Mr. Lin would keep an eye out for his grandfather all the time when he was home. When he saw his grandfather coming, he would quickly leave to avoid his grandfather shouting at and sometimes beating him. Even at a young age, Mr. Lin kept asking himself: “What's the meaning of life?” He could not find the answer and questioned his self-worth.

Mr. Lin's grandmother passed away when he was in middle school. After Mr. Lin finished high school and served his military duty, he started to work in his family's factory. His grandfather passed away a year after Mr. Lin started working. Even though his grandfather passed way, the shadow from his childhood still haunted Mr. Lin; he became bothered by those memories even more as time went by. Mr. Lin was a good help to his father, and eventually, he took over the business. However, with pressure from the business, Mr. Lin's mind felt even more tangled.

Mr. Lin then joined a volunteer group in Suao and tried to validate himself through helping the elderly and orphans.

Mr. Lin married when he was 28 years old. He and his wife treated each other well. His wife and mother got along well, too. However, because Mr. Lin and his wife came from families with very different values, they constantly fought over small things and ways to discipline their children. When Mr. Lin's wife gave him the silent treatment and stopped talking to him, the coldness drove him crazy. Mr. Lin said, “That was worse than arguing!” Mr. Lin tended to be worried and pessimistic, and became depressed. His depression became noticeably worse by the time his second daughter was born.

Finding Life's Meaning and Self Worth

Mr. Lin's friend from the volunteer group suggested he take some self-help classes. In addition, Mr. Lin went to some spiritual classes, and he also learned qigong. He had many questions regarding qigong, such as about supernatural phenomena. Mr. Lin recalled, “I once took a walk after dinner. I wandered into a book store and saw a copy of China Falun Gong. I flipped through the book and found it very interesting. I liked the book very, very much. It seemed familiar, as if I had practiced it before. Though I did not have money on me that night, I returned the next day to buy it—but the book was gone. I felt as if I had lost something.”

Soon after that, Mr. Lin heard that a lecturer at Penghua Teachers' College was learning Falun Gong. He grabbed this opportunity and became a Falun Gong practitioner himself. Mr. Lin said, “I felt that the energy field was very strong from the start. I went to one of the nine-day lecture courses and watched Master Li Hongzhi's teachings [on video]. All of my confusions were answered, and there was a loud voice in my heart: This is what I wanted, I finally found it!”

Mr. Lin recalled, “Five years before I started to practice Falun Gong, I had learned many other qigong practices. I always had the same dream. In my dream, I was driving without a steering wheel. Sometimes I could not see the road, or the road became narrower and narrower, or I came to a river that I could not cross, or sometimes I drove on ice. I was baffled. I stopped having such dreams after I started to practice Falun Dafa. I knew I had found my life's meaning through Dafa.

“I understood about virtue and karma from studying the Fa, that karma is the cause for pain,” Mr. Lin said. “I realized how to be a good person, and that the goal of being a human is to return to one's true self. In other words, I found the truth. I was no longer confused and stopped feeling worthless. From cultivating in Dafa, I learned that my life is meaningful.”

Upon understanding the Fa, Mr. Lin recalled his memories of his grandfather. He sympathized with his grandfather's pain and fear from going through two world wars, and realized that his grandfather's work load and pressure to support the family contributed to his unstable temperament. Therefore, little by little, Mr. Lin's hatred toward his grandfather was completely eliminated. The knot in his heart was released.

Mr. Lin's health also greatly improved. Prior to practicing Falun Dafa, due to psychological pressure, he had insomnia and depression, was constipated, and was always very tense. The night after he started to learn Falun Dafa, he slept soundly, and his constipation was immediately relieved. He also stopped feeling tense, and his depression was soon gone, too. Mr. Lin felt light and happy. He had never felt this way before and had never imagined that practicing Falun Dafa would have so many benefits.

Mr. Lin said: “For me, the greatest benefit from Dafa has been the change in my attitude toward life. Since practicing Falun Gong, because I treat others well and conduct business according to the principles of Truthfulness-Compassion-Forbearance, I have less attachments. As a result, I've been able to observe situations with a sharper eye, and I am able to see the cause and effect with one glance, which has helped me with my business. At work, the biggest change in me has been paying less attention to profit and putting my customers first. My attitude toward my competitors is also based on Truthfulness-Compassion-Forbearance. I used to compete with them for profit, but now I help them when I can. My competitors' hearts are touched, and they help me out, too, when they get a chance.”

The Whole Family Benefits from Dafa and Lives in Harmony

Mr. Lin and his wife started practicing Falun Dafa together. Since then, his wife has stopped giving him the silent treatment when they have disagreements. They both search within, look for their own shortcomings, and talk about it based on the Fa. As a result, their lives have become more harmonized. Their two daughters are also Dafa practitioners. Mr. Lin and his wife do not need to worry much about the two girls' behavior and school work, as the children have already exceeded their expectations.

Prior to cultivation, Mr. Lin's father had high blood pressure, numbness of his facial nerves, and sciatica. All of these ailments gradually disappeared after he started to cultivate in Dafa. Though the two parents are in their 70s, they are very healthy, and they do not feel tired after a whole day of Dafa activities.

Mr. Lin's younger brother started to practice Falun Dafa with his parents. He used to have a very bad temper, and he was also arrogant. He had practiced other qigong systems for nearly twenty20 years, but did not know that he had to search within and improve his character to gain any benefit. Mr. Lin convinced him to practice Falun Dafa and join the nine-day lecture course with his parents. Mr. Lin's younger brother is like a different person now—his xinxing has elevated tremendously. He rarely loses his temper nowadays, and he is modest and kind to others.

The whole family are Dafa practitioners. They live in happiness and harmony. Mr. Lin said, “Falun Dafa gave me a new life. I experienced how one person cultivating can benefit the entire family. My entire family are blessed by Dafa.”

“Ms. Cao Dangui from the Science and Seismological Bureau of Lanzhou City Tortured to Death in 2008 ”