(Minghui.org) A group of Falun Gong practitioners gathered in the heart of Prague on May 13, 2012, at Staromestské Square to celebrate World Falun Dafa Day and the introduction of Falun Dafa in China 20 years ago.

Czech practitioners showed the public the Falun Gong exercises and explained to passersby the reality of the persecution that is taking place in Mainland China today. Among the Czech practitioners are some of Vietnamese decent, as well as one practitioner originally from the Republic of Congo in Africa.

Because May 13th was also the day of Prague's Annual Marathon this year, the square was filled with not only tourists but also thousands of runners and their fans. Many people were shocked by the cruelty of the Chinese regime and signed the petition to stop the persecution. While trying to explain why Falun Gong is persecuted in China, a British woman quickly understood, “They [the communists] want to control people's minds.” 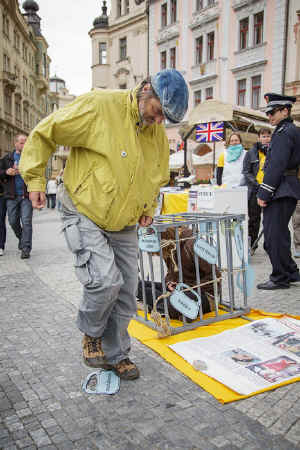 Considering the current political situation in China, this symbolic end of the persecution might soon come about, thus fulfilling the words of Czech president and former dissident, the late Vaclav Havel, who said, “Truth and love will win over lies and hatred.” Many practitioners and kindhearted people alike believe that the end to the persecution is quickly approaching.

Czech singer and songwriter Pepa Nos also came to support the event. “I consider it my moral duty to come here,” she said. “The Chinese Communist regime is the worst evil in this world and it poses a threat to all humanity. It attacks the very essence of human existence.” 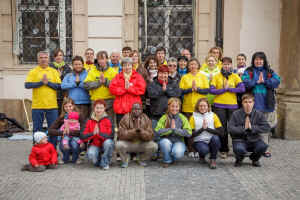