(Minghui.org) This article was originally published in August 2011

CCTV7 broadcast the program, Coming Internet Storm, in its military science series. It showed an Internet attacking system developed by CCP Military Electronic Engineering College and one of its targets: a list of Falun Dafa websites including Falun Dafa in North America, Falun Dafa in Alabama, and the Minghui website (Image 1). 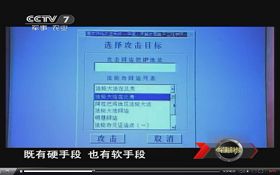 In another screen, the attacking system attacked target IP 138.26.72.17 (Image 2), which was used by a Falun Gong practitioner in America. 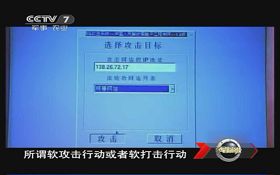 During the interview, Ms. Zhou said that, since the CCP initiated its persecution of Falun Gong, her computer and other practitioners’ computers have frequently experienced unusual problems. She said, “When Hu Jintao visited Canada last year, the computers of several invited guest speakers were attacked before a press conference. Some of them had viruses while others crashed.”

She pointed out, “Since the persecution was initiated in 1999, Falun Dafa websites outside of China have been frequently attacked by the CCP. The CCP uses state resources, and even military power, to attack Falun Dafa websites. It means that the CCP is seriously afraid of Falun Gong. On the other hand, it allowed the rest of the world to see the true nature of the CCP.”

Ms. Zhou believes that the CCP’s Internet attacks target not only Falun Gong websites and practitioners, but also other people, governments, financial institutions, and scientific research institutes. She said, “Whoever the CCP wants to take advantage of or persecute, his or her computer, telephone, and communication tools are monitored or attacked. The CCP’s Internet attacks are a threat to safety worldwide.”

McAfee has a well-known malware detection program. In response to China's tactics, McAfee has not authorized use of its software in China. An independent Internet safety expert pointed out that, based on the available data, the source of all hacking leads back to China. These hackers employ similar methods and all the attacks originate from servers in China. McAfee’s 14-page investigation report indicates that malware was found in the UN Secretary-General’s network going back two years. Other targets included the US military system, satellite communication systems, and the governments of the U.S., Canada, Taiwan, South Korea, India, Vietnam, etc.

A network expert at McAfee said that the reason the CCP infiltrates the computer systems of large corporations and governments is to obtain useful information before they become business partners and to have access to privileged information at critical points.

Last April, a Canadian national TV station reported that Chinese hackers attacked computers not only in critical federal agencies, but also in the Canadian Parliament, targeting those members of parliament from districts with large numbers of Chinese constituents. An insider indicated that The Communications Security Establishment Canada traced hackers to the Chinese Embassy in Ottawa and servers in Beijing.

“The April 25 Appeal Was an Attempt to Prevent the Persecution ”