(Clearwisdom.net) Falun Gong practitioner Mr. Wu Tengpeng, 36, from Jiujiang City, Jiangxi Province, was sentenced to a three-year prison term on September 21, 2011. He was taken to the Yuzhang Prison in late 2011. Mr. Wu's mother and brother went to the prison on January 19, 2012 to visit him. Chen Xingdong, chief of the Education Section, created many obstructions for them.

Mr. Wu graduated from the Jiangxi University of Finance and Economics. In May 2011, Mr. Wu and his mother, Ms. Liu Furong, were arrested by officers from the Wuli Police Station, for posting several stickers that contained truth clarification information. Ms. Liu later escaped. Tian Ruhong, chief of the Domestic Security Division of Lushan District Police Sub-bureau, deceived Mr. Wu's father by saying, “Ask Liu Furong to come and clarify some facts with us. It has nothing to do with your son.” However, Ms. Liu was arrested when she went there and was detained for a month. She was later released after being extorted of 5,000 yuan, while her son Mr. Wu is still being detained.

Under the manipulation of Tian Ruhong and Wang Nanhua, head of the 610 Office in Lushan District, and deputy director of the Lushan District Police Sub-bureau, the Lushan District Court tried Mr. Wu on September 21, 2011. Beijing attorney Mr. Wang Yajun entered a not-guilty plea for Mr. Wu. After only one round of debate, the prosecutor failed to respond and had nothing to say. When attorney Wang asked that Mr. Wu be acquitted, the judges and procurators had nothing to say and court was adjourned.

Over a month later, the Lushan District Court officials issued a verdict and sentenced Mr. Wu to three years in prison. Mr. Wu was taken to the Yuzhang Prison in late 2011.

On January 19, 2012, Mr. Wu's mother and brother went to the prison to visit him. Chen Xingdong, chief of the Education Section, denied their requests to visit Mr. Wu and deposit money in his prison account. Chen claimed that he would examine the situation two months later.

Mr. Wu's mother went to talk to the warden and the warden let her visit Mr. Wu. This time, Chen had to let the mother in, but denied the bother's visitation. It was the coldest time of the year, Mr. Wu only had a sweater on and had no warm jacket. The prison authorities attempted to transform Mr. Wu. In the past, they did not let him wear a jacket and threw it away. 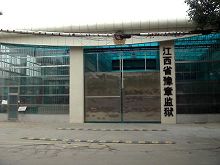 Xu Guoliang, head of the Disciplinary Committee of the Yuzhang Prison

“Xu Minfang, a Judge from Shanghai, Abuses Her Authority and Disregards the Law”