Walking Away Completely Unscathed from a Totaled Vehicle (Photo)

(Minghui.org) Chao and Hong are two new practitioners who began their practice of Falun Gong during a Nine-day Lecture Series in Toronto, Canada, in March 2011. During their first year of practice, they were involved in a serious traffic accident. Although the car was totally smashed, they were completely unscathed. Through the accident, they personally experienced the miracle of Falun Gong as explained in Zhuan Falun.

One day, after they finished studying Zhuan Falun at the local practice site, they were returning home in their friend’s car. As they turned a corner, another vehicle ran a red light and came right at them. Chao was sitting in the front passenger seat. He instinctively lifted his legs at the moment of impact. However, the crash was so forceful that his legs were still crushed from the front, and the airbags deployed and affected his neck. After both vehicles came to a stop, he looked at himself and saw that he was fine. In his arms he still held the bag in which he had placed Zhuan Falun. He immediately realized that it was Falun Dafa and Master who had saved his life! He got out of the car and examined the car with his friends. The front tires had been knocked far away, and the vehicle was totaled. Besides Chao and Hong, there were three other people in the car who didn’t practice Falun Gong. Everyone was completely unhurt.

They all felt it was a miracle that they all got out of the crushed vehicle unscathed. The police soon arrived. After seeing how the car was smashed, they quickly looked in the passenger seat, thinking that anyone who had been sitting there would be seriously injured and in need of emergency care. Finding the passenger gone, the police went to the ambulance and found Chao standing there unhurt. The police were very surprised, saying, “You are so fortunate, extremely fortunate! It really is a miracle!”

Chao examined his legs the following day and found there were no bruises at all. He only had a little pain in his neck that disappeared a few days later. Chao said, “At the moment of the crash I was not scared at all. 15 minutes later, however, I really was; my legs felt like jelly. It was just as Master said in Zhuan Falun, ‘This practitioner was not scared at that moment. All of those who have encountered these situations were not scared, although they might have been afterwards.’ It really was exactly the same.”

When the crash occurred, Hong was sitting in the back, holding a copy of Zhuan Falun. Her glasses were knocked off her face, flew through the air, and landed far away. When she found her glasses later, even they were intact. She said, “At the moment of the crash, I held Zhuan Falun close to me. I know it must be Master who protected us. I really appreciate Master and Dafa.”

This led Chao and Hong to believe even more firmly in Falun Dafa. Ever since the accident, they have treated the practice very seriously. Chao also brought his friends and family members to the Nine-day Lecture Series. During the Chinese New Year festival, Chao and Hong invited their friends and relatives to see a Shen Yun show together. 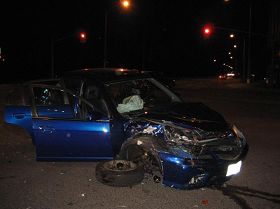 The vehicle after the accident