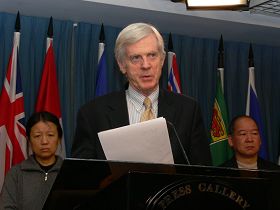 Mr. David Kilgour released the letter at a press conference on the same day. The letter stated that “Falun Gong adherents constituted at least half of the 250,000 officially recorded inmates in the country's re-education-through-labour camps.” “Chinese arbitrary detention facilities are not just forced labour camps. They are also vast forced organ donor banks.”

Matas and Kilgour wrote in the letter, “On your trade mission to China in February, we urge you ask the Government of China to stop the export of products of slave labour to Canada and to shut down the extensive network of slave labour camps in China. We ask that you propose an arrangement with China to attempt to ensure that this happens.

“China engages systematically in forced labour in all forms of detention facilities - prisons which house sentenced criminals, administrative detention for those not yet charged, and re-education through labour camps. A 1998 declaration of the International Labour Organization (ILO) commits all member states, including China, to eliminate forced labour. The Government of China reported to the ILO that its constitution prohibits forced labour and that there is a national policy of eliminating all forms of forced labour.”

However, the Chinese Communist Party didn't keep its promise. The letter pointed out, “Yet, forced labour in detention is not an abuse of Chinese law. It is the law. Article 58 of the Chinese Law on Prisons stipulates that prisons may punish a prisoner who is able-bodied but refuses to work.

“The United States signed a memorandum of understanding with China in 1992 committing the Government of China to ensure that prison labour products are not exported to the United States. The US in 1994 signed a statement of cooperation which in principle allowed US officials to gain access to Chinese production facilities suspected of exporting prison labour products. The US China Economic and Security Review Commission in its report to Congress for 2008 wrote that 'the Chinese government has not complied with its commitments' under the 1992 and 1994 agreement 'making it impossible for U.S. officials to conduct complete and useful investigations of such allegations.'

“Most of the people in Chinese slave labour camps are practitioners of Falun Gong, a spiritually based set of exercises which the Communist Party banned in 1999 out of fear that the ideological supremacy of the Party was threatened by its popularity. The US State Department's 2005 country report on China indicated that its police run hundreds of detention centres, with the 340 re-education-through-labour ones alone having a holding capacity of about 300,000 persons. The Department of State's Country Reports for 2008 stated: 'Some foreign observers estimated that Falun Gong adherents constituted at least half of the 250,000 officially recorded inmates in the country's re-education-through-labour camps....'

“The officially recorded inmates are not the full detention population. Unofficial estimates suggest that there are 1,200 forced labour camps with two million inmates.

“We, in two reports in 2006 and 2007 and a book published in 2009 under the title Bloody Harvest, have concluded that Falun Gong practitioners have been killed in the tens of thousands for their organs sold for transplants. Chinese arbitrary detention facilities are not just forced labour camps. They are also vast forced organ donor banks.”

The letter concluded, “Imports should withstand scrutiny on both economic and ethical terms. A trade mission to a Communist state exporting the products of slave labour around the world at rock bottom prices should do more than getting good deals for Canada. The mission should do what it can to end the abhorrent practice of slave labour in China.”

Three victims of the persecution of Falun Gong, Lin Mingli, He Lizhi and Zhang Tianxiao, recounted their personal experience in China.

Lin had been arrested by the CCP four times. During his six years of imprisonment in Shanghai, he was subjected to torture, brainwashing, and intensive labor as long as sixteen hours a day.

He Zhili was thrown into prison for three and half years for telling people facts of Falun Gong. He experienced torture and slave labor in Tianjin Chadian Prison. Zhili said, “We were forced to work for more than ten hours a day, digging ditches and planting trees. I was so exhausted that I couldn't stand straight. I couldn't sleep because of pain. We were fed the worst food or starved.” One of the things Zhili did was to sew soccer balls to be exported to Korea. He said, “My hands were often injured by the awl.”

On the day of the press conference, hundreds of Falun Gong practitioners from Toronto, Montreal, Waterloo, and Ottawa petitioned at Capitol Hill in snow. They quietly did exercises and reminded kind-hearted Canadians about the persecution in China in the past twelve years. They called for the Prime Minister to raise the issue of the persecution to the Chinese government, and request release of Falun Gong practitioners, including eleven family members of Canadians.