(Minghui.org) Falun Gong practitioners participated in the largest Christmas parade in Western Australia on December 15, 2012. According to a local media report, 1 out of every 8 residents, or about 250,000 people in total, watched the Perth Christmas Parade on-site. 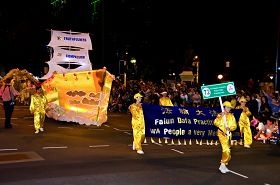 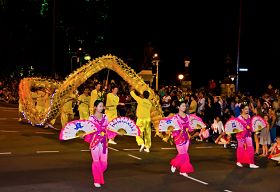 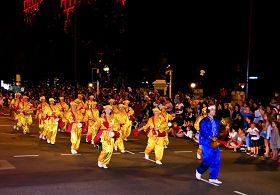 Introducing the group, the two event hosts said: “Falun Dafa is an ancient cultivation method of mind, body and spirit. Practitioners follow the principles of truthfulness, compassion, and tolerance in their daily life. Look, these principles are written on the fans they use! There are over 100 million practitioners in over 100 countries. … The Falun Gong group wishes residents of Perth a merry Christmas. … They are beautiful!”

The parade was broadcast live, with a TV replay on December 25 reaching about half of the population in Western Australia.

“Minghui Fahui | Always Reminding Myself That I Am a Cultivator”