(Minghui.org) Falun Gong practitioners marched to the Hong Kong Legislative Council Building on October 17, 2012, and appealed to the new legislative council members to address the harassment of Falun Gong information sites by Chinese Communist Party (CCP) accomplices. During recent months, the CCP has instigated harassment and interference of Falun Gong information sites in Hong Kong. The incidents have caught the attention of the public in Hong Kong. Many legislative council members responded positively and urged police to enforce law and order. They also stressed that they would safeguard Hong Kong's core values and follow the issue in the council. 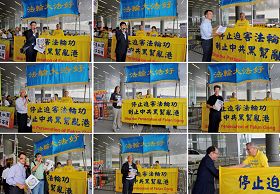 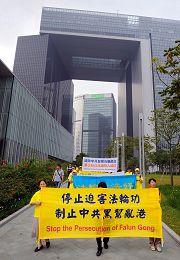 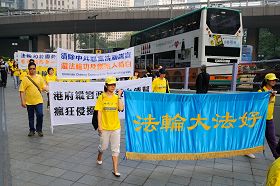 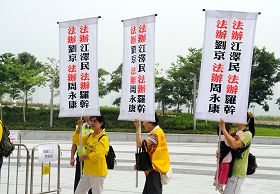 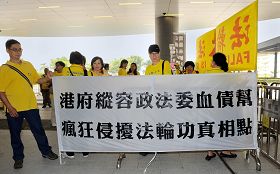 Police Connive in the Harassment of Falun Gong Information Sites

The statement pointed out that, based on the Public Order Ordinance, as well as other laws, the police could stop or ban the deliberately provocative acts of the pro-CCP gang, “Hong Kong Youth Care Association.” But the police took no action, even siding with the harassers, which was a negligence of duty and misadministration. "For more than four months, the police repeatedly neglected their duty, which indicates that the focus of the police is not law enforcement at a local level, but enforcing the policies of the SAR government led by the incumbent chief executive Leung Chun-ying. The SAR government cooperates with Zeng Qinghong, Zhou Yongkang, and other pro-Beijing forces to connive with and manipulate the CCP organizations in Hong Kong, which are disguised as civil groups, to persecute Falun Gong and other dissident groups.”

The statement also pointed out, "It is similar to what happened when the SAR Government recently cooperated with the Communist authorities in an attempt to adopt forcible brainwashing in education. The CCP is moving to erode and infiltrate other areas. For all insightful people, it is already an indisputable fact. Communist China’s lawlessness, deceit, evilness, violence, and other Party culture characteristics are being imposed on the Hong Kong people. If left unchecked, it will lead to the erosion of the core values of Hong Kong, such as freedom, human rights, and rule of law, as well as universal human moral values. Doesn't this sound worrying?"

The statement concluded with a call to the legislative council members and the administration to address the incident, "The crimes of the CCP’s persecution of Falun Gong and instigation of harassment of Falun Gong information sites must be stopped absolutely and the perpetrators must be brought to justice.”