(Minghui.org) On October 13, 2012, practitioners held activities in Colmar, a popular tourist destination in France, to raise awareness about the forced organ harvesting from living Falun Gong practitioners by the Chinese Communist Party (CCP). They collected signatures to call upon people of different nationalities to urge the UN to conduct an independent investigation and to end the atrocities soon. 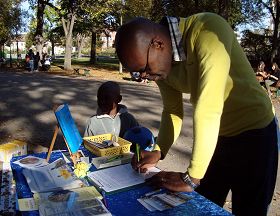 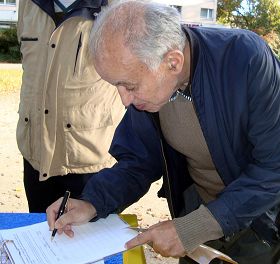 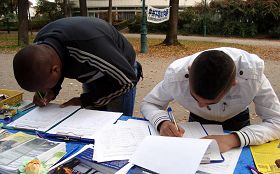 Practitioners set up an information desk in the city's Central Park. After that, some practitioners went to a weekend market where there were a lot of visitors. The practitioners brought with them informational materials about Falun Gong and signature collection forms. On the streets, inside and outside shops, in front of stalls and tour buses, in parking lots, tourists of different races and languages, both young and the old, expressed their support for the efforts to urge the UN to conduct an independent investigation over the crimes the Chinese regime has committed in harvesting organs from living Falun Gong practitioners.

A Woman from Morocco: Of Course!

A middle-aged woman was waiting to cross the street, while carrying shopping bags of different size. A practitioner approached her and asked if she would like to receive some information. Her facial expression changed after she saw clearly the information on the signature collection form about organ harvesting. The traffic lights at that time turned green. The practitioner asked her if she still wanted to sign. She replied right away, “Of course!” As soon as she finished her words, she put all bags on the ground, and signed the petition. She said she was from Morocco, and this was the first time that she had heard of such a horrible thing.

A young American man viewed the display about the CCP's forced live organ harvesting, and kept asking, “Is it true?” His eyes were shining with tears, when he listened to a practitioner explain to him the evidence that has been exposed. His friends across the road were urging him to be quick to join them, and he said, “In a while!” He signed the petition before he left. His voice choked and he was close to tears.

Shop Owner: Can I Have Some More Forms for People to Sign in My Shop?

A Swiss shop owner signed the petition and said that his shop is in a conspicuous place downtown. “Can I have some more forms for people to sign in my shop?” he asked, and took several blank forms. He asked for a practitioner's contact information so that he could mail the signature collection forms to the practitioners before the deadline.

Two African young men ran to us to sign the petition before the end of the activity. They said that they were not around when their friends signed earlier. They decided to sign after finishing reading the informational materials. The shorter one said it was terrible! They had been discussing it. The taller one said that they came here along with their parents from war-torn Africa. Their country is full of poverty, hunger and violence, but they had never heard of a government involved in trafficking in human organs. They asked what “live organ harvesting” means. They were stunned for quite a while after a practitioner explained it to them.

French Man: It's a Serious Problem!

A man in his 50s took a glance at the information written on the top of a signature collection form and asked a practitioner if there was something more detailed. The practitioner gave it to him. He read it and then signed the petition. He said, “The problem is serious! It's not politics, and neither is it a general human rights issue, it has a connection with every one of us, and everyone is responsible to stop it!”

A German Couple: Such a Government Must Step Down, and They Should be Held Accountable!

A German couple signed the petition. They heard from a practitioner that tens of thousands of people have had their organs harvested when they were still alive and sold for profit. Moreover, it is state-sanctioned, and the military has directly been involved. On top of that the CCP covers all this up, and has told lies all these years. The couple said that it is of great significance to expose them, and urge the UN to investigate. The Chinese regime should immediately be disbanded, and the government must step down, and officials be held accountable! The German government must do something, otherwise it will be too late!