(Minghui.org) On the afternoon of October 7, 2012, Falun Gong practitioners held activities at Prince Bridge in downtown Melbourne to expose the Chinese Communist Party (CCP)’s thirteen-year-brutal persecution of Falun Gong. Many passers-by signed a petition calling on the United Nations Human Rights Council to investigate the CCP’s live organ harvesting from Falun Gong prisoners of conscience. Some Chinese tourists quit the CCP and its affiliated organizations upon learning about the organ harvesting crimes. 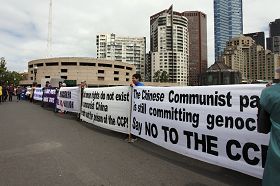 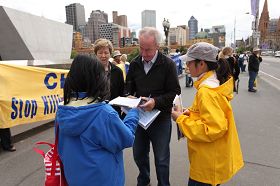 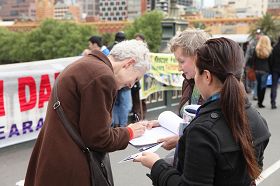 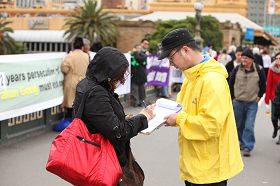 Many Australians knew about the persecution of Falun Gong in China. However, this was the first time for most of them to learn about the CCP’s atrocities of live organ harvesting. They were shocked and could not believe such an unthinkable crime could be happening. Many of them thanked the practitioners for their efforts and signed the petition.

Mr. Wang, an organizer of the event, said, “We have come here to inform people that the CCP has been persecuting Falun Gong for thirteen years. Recently, the CCP’s atrocities of live organ harvesting were exposed in UN meetings and the media. But the CCP attempts to hide the facts by various means. We call on the international community to investigate the crimes and spread the information so that this can be stopped.”

He continued, “Many passers-by showed support for our efforts and offered to help inform the media of the issue. We will expose the CCP’s atrocities as long as the crimes are not stopped.”

Ms. Beyaz, a human resource official from Canberra, and her companion signed the petition and learned about Falun Gong. She was shocked and could not understand why the CCP persecutes such a good practice.

Mr. Collins is Chief Executive Officer of a UK company. He and his partner Victoria from Singapore stopped to talk with a practitioner, signed the petition and took information materials for their friends and colleagues.

A couple from the United States knew about the persecution of Falun Gong and was touched by Falun Gong practitioners’ perseverance. They gladly signed the petition.

Several tourist groups from China stopped to get information. Some had misunderstandings about Falun Gong. After talking with practitioners, many of them changed their views and renounced the CCP and its affiliated organizations on the spot.

The event concluded at 3 p.m.