Idaho: Spreading the Fa at a Health, Beauty and Fitness Fair (Photos)

(Minghui.org) Falun Gong practitioners participated in the 20th Health, Beauty and Fitness Fair in Boise on October 6 and 7. 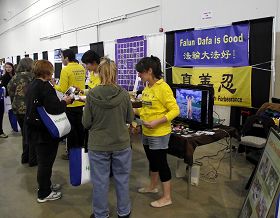 Introducing Falun Gong to the public 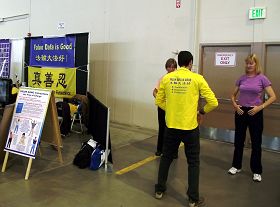 Boise, the capital of Idaho, is the third largest city in the northwest area with population of 610,000. Practitioners have attended the fair several years in a row. They presented the practice of Falun Gong as well as information on how it is being persecuted in China. Many people signed the petition to condemn the persecution.

After talking to practitioners, a few visitors brought their family and friends to the booth, asking practitioners to tell them about Falun Gong. A lady asked for more truth-clarifying materials, because she wanted to put some at her workplace. 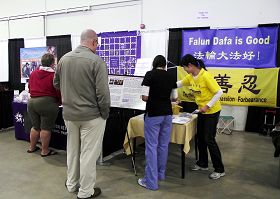 Reading the truth-clarifying display board.

A gentleman who read the truth-clarifying display board and learned about the organ harvesting condemned the persecution. He said that he was one of the organizers of the fair, and he was glad to see Falun Gong participate. He bought a copy of Zhuan Falun and was pleased to accept three paper lotus flowers from practitioners.