(Clearwisdom.net) Today's news from China includes incidents of persecution that took place in 17 cities or counties in 15 provinces. In this report, 9 practitioners were subjected to mistreatment during their detention and at least 17 practitioners were illegally arrested. 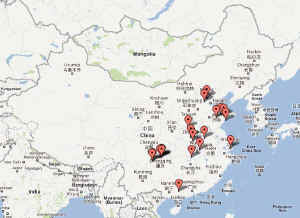 Mr. Chen Xiaodong was illegally sentenced to five years in prison. His term was extended to nine years later on. He is currently detained in Anhui Third Prison.

Ms. Cheng Xiuping was illegally arrested by officers from the Domestic Security Division of the Tongbai Police Department on April 11, 2011. She was detained for one month and was released on the afternoon of May 11, 2011, after the police extorted 5,000 yuan from her husband.

On January 26, 2009, Cao Shuwen and other officers from the Changyi Domestic Security Division and Buchuang Town Police Station, broke into Mr. Liang Qingxi's home and took away a computer, printer, DVD player, cell phone, a set of Falun Dafa books and a set of Falun Dafa videos. Mr. Liang was taken to the Changyi Detention Center. One month later he was transferred to the Jinan Forced Labor Camp. The labor camp refused to accept him because of his poor physical condition. Mr. Liang was released after the police extorted 6,500 yuan from his family.

Mr. Liu Zhirong was reported to police while talking to people about Falun Gong on Tieshan Road during the early morning of August 18, 2011. He was then taken to Tieshanlu Police Station. The police went to ransack his home and took away photos of Falun Gong's founder Master Li, Falun Dafa books, exercise audio tapes, and other items. The next night, Mr. Liu was taken to the Dashan Detention Center. The detention center refused to accept him because of his poor physical condition. Mr. Liu was released that night.

Mr. Zhao Liang, from Jiulongpo District, was taken to the Jiulongpo Brainwashing Center in the middle of July 2011. He was recently transferred to another place because he had not been “transformed”. His whereabouts are unknown.

Ms. Zhu Dongdi, 68 years old, lives in Shangnan, Pudong, Shanghai. 610 Office agents ransacked her home on the morning of August 8, 2011, and Ms. Zhu was arrested. She is being detained in the Xuhui Detention Center.

7. [Yueyang, Henan Province] Mr. Xu Shengqun Sentenced to Three and a Half Years in Prison

Mr. Xu Shengqun was sentenced to three and a half years in prison by Yunxi Court on March 13, 2010. He is being detained in Jinshi Prison.

Ms. Yan Wenen and Ms. Zhang Ruisheng from Miaodian Township, Sheqi, were reported to police when they went to Taihe Township, Sheqi, to clarify the facts on August 15, 2011. They were arrested by officers from Taihe Police Station and were taken to the detention center.

78-year-old Ms. Lao Sun from Heya Village, Chengguan, Linqu, was arrested by police while distributing Falun Gong materials on the morning of August 20, 2011. The police ransacked her home and took away her laptop, a printer and other belongings.

Mr. Duan Fanghe is a retired employee from the Guangyangba Shipyard in Nanan District, Chongqing. He was arrested at the beginning of July 2011, and was detained in the brainwashing center in Nandi Park.

Ms. Du Xiaoshuang from Hehuachi, Xiajiangbei, Yibin, was taken to the Caiba Brainwashing Center by the local police on the morning of August 22, 2011.

Ms. Yang Chunyuan from Jiangbei District was supposed to be released on August 22, 2011, after being detained in a forced labor camp for two years. However, she was transferred to another place the morning of her release. Her whereabouts are unknown.

On the afternoon of August 16, 2011, the Tuanfeng police broke into the home of Ms. Hu Juying in Linshanhe Town and ransacked it. They took away a computer, printer, DVD burner, about 10,000 yuan cash, and other items. Ms. Hu was arrested and is being detained in the Tuanfeng Detention Center.

15. [Chongqing] Mr. Chen Changqun Unconscious as a Result of Persecution

Mr. Cheng Changqun is an accountant in the Yubei Disease Control Center of Chongqing. The police arrested him at his office on August 17, 2011. He has since been detained in the Wangxiangtai Brainwashing Center in Lushan Village. In the brainwashing center, Mr. Chen was tortured until he became unconscious.

Ms. Chen Chan was arrested at her company by local Domestic Security Division officers at around noon on August 11, 2011. On the same day, Mr. A Zhuang was arrested at his home by police. The two practitioners were detained at the Dafengmen Detention Center.

On the night of August 4, 2011, Ms. Kui Shuhua was arrested at her home by officers from Shangzhuang Police Station in Haidian District.

Around the same time, Mr. Liu Yuejin was arrested at his office and was sent to the Houshajian Detention Center.

Since June 2011, Dai Shangping and Peng Zhanghua from the Junshan District 610 Office, accompanied by Zhu Guoguang from Liangxinbao Police Station and Xiao Xiangfa, Party secretary of Renhe Village, have withdrawn the pension of Mr. Dai Maosheng, in his 70s, and his wife Ms. Li Xueqing. The elderly couple now have no income.

Mr. Wang Defu is being detained in the brainwashing center located in the Xiaocun Township Senior Center. He was tortured, beaten, and his family has not been allowed to visit him.

On the afternoon of August 15, 2011, Ms. Jing Jianmei from Xiangdian, Pingdu, brought her daughter, who is about six or seven years old, to distribute Falun Gong materials in Xiaowa Village. They were reported to police and were arrested by officers from the Taishanlu Police Station.

The police threatened and coaxed Ms. Jing's daughter into telling them their home address and where the key was stored. The police ransacked their home immediately and took away all Falun Dafa books, video and audio tapes, a computer, printer, MP3 player, and other items.

The detention center refused to accept Ms. Jing because of her physical condition. Ms. Jing was released at around 11:00 p.m. that night.

“Advancing Diligently On the Path of Cultivation”