(Clearwisdom.net) From September 15 to 17, 2011, the 34th annual Autumn Health Expo opened at the Municipal Cultural Centre in the southern city of Katowice, Poland. This is the fourth consecutive year that practitioners in Poland participated in the expo. Countless participants stopped at the booth to learn about Falun Gong. Group after group of people came to learn the exercises in an separate room for instruction, more than in previous years. About 500 people signed the petition to condemn the Chinese Communist Party's (CCP) persecution of Falun Gong. 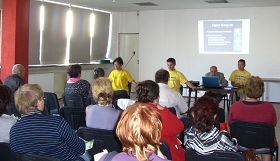 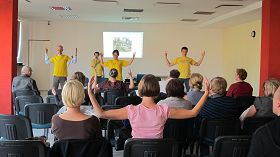 Practitioners in Poland demonstrate the exercises 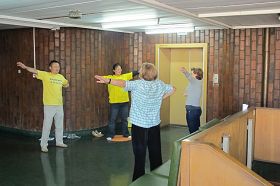 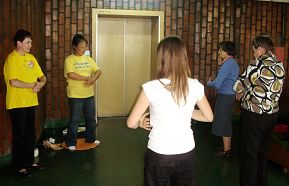 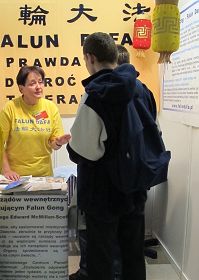 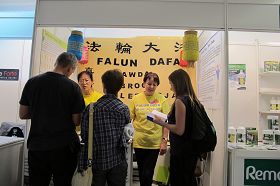 People stop at the Falun Gong booth to learn more 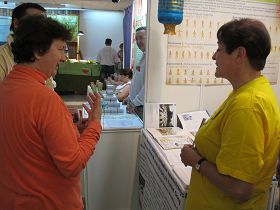 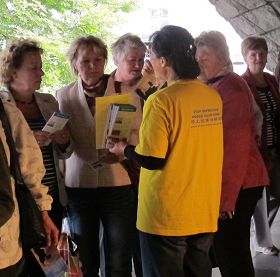 A practitioner speaks with people about Falun Gong and the persecution 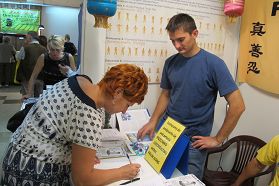 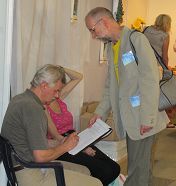 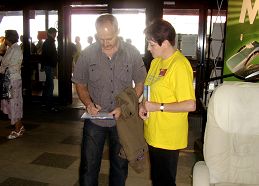 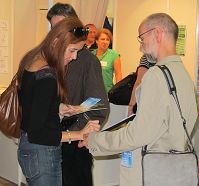 At the entrance to the exhibition hall, a mother and a daughter signed the petition form after talking to the practitioners. The mother said: "I have been telling my children to have a sense of justice and help others more. I have supernormal abilities and have often used my abilities to do healing." Looking at the kind mother and daughter, practitioners thanked them for their support, and strongly recommended the book Zhuan Falun to them, where there is a section that warns about the harmful effects of healing others with supernormal abilities. The woman immediately bought a copy of Zhuan Falun and repeatedly thanked the practitioners.

A young man came to the booth and carefully studied the diagram of Falun Gong’s five exercises. He said he had been studying qigong for five years, but felt something was missing. Seeing Falun Gong, his intuition told him that this was what he had been looking for. He bought the book Zhuan Falun, left his contact number, and signed the petition form.

Having seen Falun Gong’s leaflets, a professional yoga teacher was greatly interested. Wanting to give it a try, she came to the instruction site on the fifth floor. After the instruction, she said, "Falun Gong is amazing, incredible. I felt enormous energy. It was my first time learning it. My movements must not have been so accurate. Even so, I felt so much energy. I want to practice Falun Gong."

During the expo, there were several meditation groups that came to the Falun Gong booth. Some of the people from these groups mentioned seeing a dazzling light in other dimensions above the Falun Gong booth. One woman from the city of Lodz in central Poland said that she saw rings of light surrounding practitioners. She planned create a painting of what she saw. They each bought a copy of Zhuan Falun.

On the last day, a woman made a special trip to the Katowice health expo from Szczecin, a city five hundred and sixty kilometers away, near the German border. When she reached the instruction site on the fifth floor, she said to practitioners: "Finally, I found you! Last year, I saw the introduction of the practice here. I knew it was a wonderful practice, but I lost the flyer when I got home. I did not know where to find you and waited for a whole year. Many times I walked the streets and parks in Szczecin, hoping to run into someone that taught the practice.” When she learned that she had purchased the practitioners' last copy of of Zhuan Falun, she exclaimed, "I'm so lucky...so lucky!"

“Sharing – Fellow Practitioners, Did You Obtain the Fa?”