(Clearwisdom.net) On June 29, 2011, Shijiazhuang TV Station aired a talk show clip entitled “I became a servant to my son” on their “Emotional Password” program, which was widely accessed on the Internet. Internet viewers were “grinding their teeth in anger” toward an outrageous son who totally disrespected, abused, and took advantage of his father. The “awful son,” named Xu Feng, could no longer withstand the pressure and exposed the inside story. The so-called talk show was a stage play. Actors played the son and father. The exposure of the truth triggered a mighty uproar over the Internet. How can a TV station meddle with peoples' emotions like this?! Under the public wrath, the State Administration of Radio Film and Television fined the station and canceled the program for 30 days, and program designer “Jiutian Media Inc.” in Hebei Province had his license suspended for three years.

The talk show clip from the Hebei-based TV Station was blamed for meddling with public emotions, but this show was not all that terrible, as it did not promote the son's outrageous behavior. In fact, the most poorly scripted program was the CCTV's Focal Point program, regarding the “Self Immolation.”

On January 23, 2001, the so-called Tiananmen “Self Immolation,” framed Falun Gong practitioners, and shocked the nation and the world. Over the years, among those who misunderstood or felt animosity toward Falun Gong, most had watched the CCTV Focal Point episode regarding “Self Immolation,” a propaganda program instigating hatred. 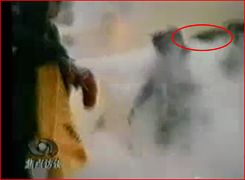 CCTV “Self Immolation” slow motion analysis 1: A fire extinguisher was spraying, and in the meantime an arm was raised, hitting Liu Chunling's head with brutal force 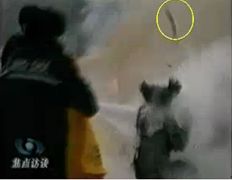 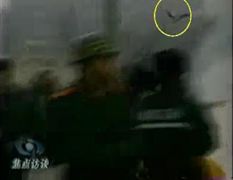 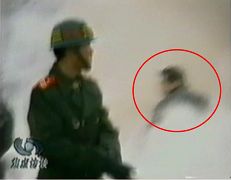 CCTV “Self Immolation” slow motion analysis 4: Man wearing coat stands at the position where the heavy blow was dealt, maintaining the posture of hitting someone seconds prior

The CCTV Focal Point program regarding the “Self Immolation” did much more damage than the recent program. It incited and misled people to foster hatred toward Falun Gong practitioners. Most people don't know that none of those who participated in the self immolation were Falun Gong practitioners. On February 4, 2001, a report was issued by the Washington Post, called “The self immolation fire shines on the dark sinister secret in China.” The reporter went to the hometown of Liu Chunling (Kaifeng City, Henan Province), the self-immolation victim who died at the scene, and investigated her background. According to her neighbors, she was a prostitute, and no one ever saw her practice Falun Gong. In the slow motion video, we can see that Liu Chunling did not die from the fire, but from a blunt force to her head. Falun Gong is a cultivation way which teaches people to be kind and to be better people. It does not have precepts like religions, but one point made very clear is that cultivators are absolutely prohibited from killing. Falun Gong books clearly state that suicide is also killing, and is a sin. The Chinese Communist Party (CCP) deceived people by claiming that the people who committed self immolation were pursuing consummation. The CCP destroyed Falun Gong books and also blocked the Falun Gong website abroad, so people had no way of learning the truth. 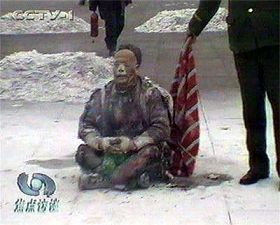 It seems that the reporters knew in advance what would happen, and were prepared. Photos were taken from far, nearby and close up. Also the distant pictures covered the entire Tiananmen Square, but the CCP claimed that it was a surveillance camera. But surveillance cameras are fixed, and the footage of the self immolation was caught by moving cameras. Also, microphones recorded the shouting, and a cameraman snapped pictures from various angles, even a scene of child screaming for her mother. This “self immolation” was seemingly a staged play produced by the CCP to generate hatred.

Compared to the Hebei TV Station's fake story, the CCTV did not just deceitfully affect the audience's feelings, but damaged the moral foundation of society. Such a malicious program which instigated hatred, turned things upside down and damaged society, is equivalent to the Nazi's hatred propaganda in the World War II era. The CCP used the “Self Immolation” to defame upright beliefs. Their purpose was to use it as an excuse for the brutal persecution.

On August 14, 2001, a representative from the International Education Development Organization (IED) spoke at the United Nations Promote and Protect Human Rights Committee 53rd Conference. The representative strongly condemned the CCP's persecution of Falun Gong practitioners as an act of “State Terrorism.” The IED declaration stated: “The government, in exercise of the right to reply, attempted to justify its State terrorism against the group by calling it an "[Chinese government's slanderous words deleted]" that has caused deaths and the break-up of families. In our investigation, the only deaths have been at the hands of the Chinese authorities; .....The regime points to a supposed self-immolation incident in Tiananmen Square on January 23, 2001 as proof that Falun Gong is an "[Chinese government's slanderous words deleted]." However, we have obtained a video of that incident that in our view proves that this event was staged by the government. We have copies of that video available for distribution.” Facing the irrefutable evidence, the Chinese representatives were speechless.