(Clearwisdom.net) There is an inspirational Chinese saying: “Disadvantage is advantage.” However, today’s prevailing attitude in Taiwan is more like, “It is good enough that I do not take advantage of people!” No one can remain calm when being taken advantage of.

Yet Mr. Chang Chao-Chi is an exception. Until he started practicing Falun Gong, Mr. Chang was fighting over the smallest of self-interests to get ahead. Nowadays, Mr. Chang receives a lot more in return when he appears to be taken advantage of.

Mr. and Mrs. Chang started practicing Falun Gong in March of 2001. Their three children, after witnessing the beauty of Falun Gong, decided to take up the practice as well. Since then, Mr. Chang and his wife haven't had to worry about the academic performance or the morality of their children.

Mr. Chang is 44 years old with only a middle school diploma. He has been a fruit vendor since he was 17. He is currently the owner of a large fruit and vegetable store. Because he follows the principle of Truthfulness-Compassion-Forbearance in operating his business, Mr. Chang maintains many loyal customers. He employs seven individuals to help run the business. Once an overworked business owner with hepatitis C, Mr. Chang is now perfectly healthy and content. He once commented, “I never expected Falun Gong to be so good for my health and morality!” 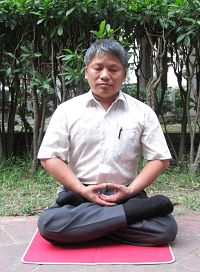 Mr. Chang Chao-Chi experiences the beauty of Falun Gong through his own practice

A Hard Life as a Fruit Vendor

When Mr. Chang was little, his oldest brother started a small business as a vegetable vendor. When Mr. Chang graduated from middle school, his brother helped him start a fruit vendor business of his own. He taught Mr. Chang how to purchase fruit from wholesalers and sell it on the streets. It was a hard life - making the mind and body weary. Because he did not have a license to sell merchandise on the streets, he remained constantly on the look-out for the police. He awoke every day at 3 a.m. in order to get to the wholesalers’ market on time by 7 a.m; he would take only a one-hour break at noon. He would later move his stand to another evening food and vegetable market where customers would shop before their evening meal. His fruit stand would remain open until 11 p.m.

After four years of such demanding labor, Mr. Chang finally saved enough money to rent a small store. By then, however, he felt completely worn out. Despite his fatigue, he refused to hire help and instead insisted on doing everything himself. This decision took a toll on his health, and he would become exhausted well before the end of each day; in fact, he always felt exhausted. Sometimes he would fall asleep while counting the day’s revenue and the coins would slip from his fingers, falling all over the ground. While driving, he would often pull over a few times to nap before he could drive again. Before he got married at 26, Mr. Chang was diagnosed with hepatitis C, and the hospital could do very little to help him.

The Best Thing That Happened in Mr. Chang’s Life

Together with the help of his brothers, sister, and cousins, Mr. Chang expanded the business to include five fruit and vegetable stores. With so many owners all operating the same stores together, it became difficult to cooperate, so each person became manager of their own store. As a result of a random drawing, Mr. Chang took over operations of the store in Neihu. As the newest store, it still required intensive start-up work. The others said he was unlucky, but now Mr. Chang reminisces, “I was very lucky to have come to Neihu because I was afforded the opportunity to learn Falun Gong. It changed the perspective on my life, my health, and my entire mentality.”

Mr. Chang's next-door neighbor in Neihu was the owner of an organic restaurant and produce stand. The restaurant was also a location where free nine-day Falun Gong seminars (video lectures from Falun Gong's founder, Mr. Li Hongzhi) were held on a regular basis. Although Mr. Chang became curious about the practice, he resisted making any inquiry amidst the rigors of operating the new store. However, one of his employees did sign up to attend the free nine-day instruction. After practicing Falun Gong for six months, he presented Mr. Chang with a gold cover copy of Zhuan Falun. It took Mr. Chang nearly one month to finally finish reading the book, but by the time he did, he felt strongly in his heart the desire to follow the teachings. From then forward, he made the decision to start practicing Falun Gong, as did his wife.

Mr. Chang said, “I was blown away when I first came across 'Zhen-Shan-Ren Is the Sole Criterion To Discern Good and Bad People' in Zhuan Falun. Street vendors are accustomed to not considering each other at all in order to get ahead. They will behave dishonorably if they can get away with it. It seems important to minimize losses, so they will never admit their faults. My values were completely transformed when I finished Zhuan Falun. After I attended the free Falun Gong seminar for nine days, I started going to the park where Falun Gong practitioners perform the exercises together. No matter how tired I was, I would go to practice the exercises. I would not allow myself to be lazy and miss the opportunity.”

Soon, Mr. Chang stopped feeling constantly tired. Nowadays, he sleeps little, but he feels energetic every day. In fact, he hasn't felt as energetic in decades.

Mr. Chang said, “Before I started practicing Falun Gong, I did not expect the practice to be so good!”

A Life of Strife and Discord

Mr. Chang used to be an impatient man. Before he started practicing Falun Gong, he possessed a terrible temper. People’s words and actions would irritate him. On one instance, he became enraged over an argument between his sister and brother-in-law in the other room. When he got up to attempt to end the fight, he passed out in anger before he could even try.

Before Mr Chang started practicing Falun Gong, he would fight with other vendors when he felt he had been taken advantage of. It even seemed normal to retaliate. One day because Mr. Chang was aggressively shouting his sales slogans, another vendor beat him up for being too loud. Mr. Chang thought the bullying was uncalled for, so he found five other men to beat the other man up. Afterwards, he found an intermediary to prevent the man from filing a lawsuit, but still had pay for the man’s medical expenses as a result of the retaliation.

Mr. Chang recalled, “Actually, it was a horrible feeling to have retaliated. For a month I was on the edge of my seat. I feared that he might get revenge at any time. I was living in fear. It was really torture.”

Since Mr. Chang started practicing Falun Gong, he has attempted to always follow the cultivation principle of Truthfulness-Compassion-Forbearance. He practices altruism and mindfulness. Another substantial improvement reflects in the way he manages his business.

Before Mr. Chang started practicing Falun Gong, he preferred purchasing inventory from auctions because the prices were comparatively low, which translated into higher profit margins. He only ever considered paying the lowest price, with no concern for quality. Mr. Chang describes this nature as “Vultures fighting over carcasses. Profit is everything. People will walk over their own grandmother to get ahead.”

Now Mr. Chang considers the other vendors and his customers before himself. Instead of buying his inventory at auctions, he now buys from wholesalers. This guarantees excellent quality of goods and honest service. Word travels fast, and soon customers began flocking to his store.

“If Everybody Were Like You, We Would No Longer Need the Police.”

When Mr. Chang purchases from the wholesalers’ market, he never negotiates the prices. He requires himself to be truthful, and he decides to trust other people. Mr. Chang said, “If I should make a bad purchase, I don’t blame others. I blame myself for the lack of expertise. As a result, I learn more quickly.” At first, the sellers were astonished to find someone as “foolish” as Mr. Chang, but after several years, Mr. Chang won their trust. Sometimes if Mr. Chang finds something wrong with the quality of the merchandise, he will gently alert the wholesaler responsible. The seller will usually ask to compensate him immediately. Mr. Chang always declines. Fellow vendors will comment, “It is not fair. When I ask for compensation, you [the wholesaler] refuse. He [Mr. Chang] does not want your compensation even though you insist.”

One day Mr. Chang bought ten durian fruits. His truck was already full, so he asked a seller to watch over the fruit in the meantime. When he returned the next day, the seller looked confused, saying, “Did you leave me with any durian? I didn’t see any durian.” Mr. Chang replied, “Oh, never mind.” A vendor overhearing the conversation asked Mr. Chang, “Falun Gong practitioners are truly different. He told you they are missing and you accept it? Why do you not argue with him? He had your durian.” Mr. Chang responded, “If they are destined to belong to me, then I will have them back one way or another. If they are not, then they will never find their way back to me. He did not lose them on purpose.” After 30 minutes, the seller told Mr. Chang, “I have found your durian.”

Many sellers and wholesalers know that Mr. Chang practices Falun Gong. Many have commented, “If everybody were like you, we would no longer need the police.”

“A Non-practitioner: Saved by Knowing the Truth”