(Clearwisdom.net) The European Divine Land Marching Band made up of Falun Gong practitioners participated in festival parades in Roermond and Zundert, Holland on the first weekend of September.

A culture festival and parade was held in Roermond on September 2. More than 80 performance groups from Holland and other countries participated in the parade, including the Divine Land Marching Band.

The event started with performances on stage at the starting point of the parade, followed by a parade that passed by one of the largest designer outlet malls in Europe. The Falun Gong entry, featuring the Divine Land Marching band, followed by practitioners demonstrating the peaceful exercises, was warmly received. 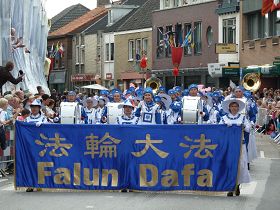 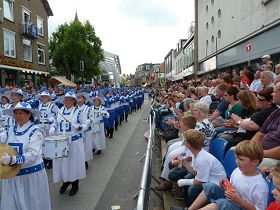 The 75th annual Dahlia Flower Parade was held in Zundert on September 4. Band performances were arranged between the floats. Crowds of spectators lined the parade route for this popular event.

In ancient Chinese costumes, the band performed the music “Falun Dafa Is Great”, “Delivering a Treasure” and other lively songs. 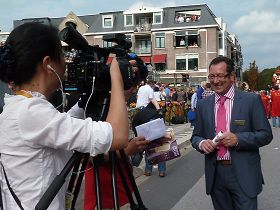 Rinie Tilburg, Chairman of the Parade Committee, commended the Falun Gong group's performance, saying, “Very good. It is new for us. We try to invite a new band every year. I hope they will be invited again next year.”

Narmon Young, a chemical engineer who watched the parade, said, “The bands we hear are generally from Holland or France. This is my first time to hear a Chinese band. It is very good, very unique.”

Another parade spectator named Rong said, “The music of the Falun Gong band is outstanding. This parade is now more international, which is great.”