(Clearwisdom.net) Ms. Zhang Li is being held at the No. 11 Prison District in Heilongjiang Women's Prison. On June 9, 2011 the guards transferred Ms. Zhang to an isolation ward in the Heilongjiang Women's Prison Hospital (also called the No. 10 Prison District for sick prisoners), because her firm belief in Falun Dafa encouraged other practitioners. She was severely beaten and held in a cage. Ms. Zhang is currently being held in room 305.

Groups of five inmates each are formed in the No. 11 Prison District to beat Falun Gong practitioners. Ms. Zhang refused to “transform” and was beaten by inmates Wang Shanshan and Wang Xinhua. The guards used Wang Shanshan to persecute practitioners. Other inmates had to do labor but Wang Shanshan did not. Wang beat practitioners viciously. One inmate asked her, “What will happen if Falun Gong practitioners are injured?” Wang Shanshan said, “Offer them some money and give them medical treatment.” The inmate asked again, “What will happen if they are beaten to death?” Wang said, “It won't happen. If it happens, I will just spend more time in prison.” The inmate then asked, “Could you not beat them then?” Wang Shanshan said, “Chief Wang Yali is watching, so I have to. Zhang Li doesn't follow the rules, so I often beat her.”

One day Wang Shanshan and Wang Xinhua beat Ms. Zhang. Wang Xinhua poured water over her and pricked her with a syringe needle.

Ms. Zhang was later transferred to an isolation ward in the Heilongjiang Women's Prison Hospital. Since there is no monitor in the hospital, Wang beat Ms. Zhang more viciously. She handcuffed Ms. Zhang to the ground. Ms. Zhang was not allowed to step out of the room and use the restroom. She had to use a chamber pot brought in by an inmate. She was handcuffed to the bed at night.

Held in a Cage

Ms. Zhang was transferred to the Heilongjiang Women's Prison Hospital on June 9, 2011. The guards put her in a cage for more than one month. 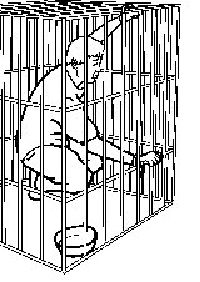 Illustration of the cage

A practitioner asked Zhao Huihua, the president of the hospital, “Why do you put Ms. Zhang in a cage?” Zhao Huihua answered, “She has mental problems.” The practitioner said, “Ms. Zhang doesn't have any mental problems. We got to know each other in Mudanjiang City. Just because she didn't transform, you do that to her?” Zhao Huihua didn't want to be held responsible and said, “I don't know either. The cage was made by the prison governor and I have no authority to release her.” The practitioner asked her to release Ms. Zhang immediately.

Zhao Huihua transferred Ms. Zhang Li to room 305 the next morning. Ms. Zhang is currently being held in that room. Two other practitioners, Ms. Li Yushu and Ms. Cao Yingchun, are also being held in the hospital. They are forced to wear a prisoner's uniform every day and their hands and feet are tied together.

“Frankfurt, Germany: Protesting the Persecution in Front of the Chinese Consulate's New Location”