(Clearwisdom.net) It was raining on July 23, 2011when Falun Gong practitioners gathered at Karlsplatz in Munich, to hold activities to mark the 12-year persecution by the Chinese Communist Party (CCP) and to support 98 million brave Chinese who have quit the CCP and its affiliated organizations. 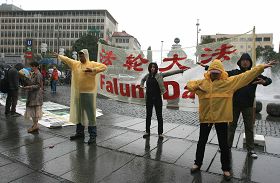 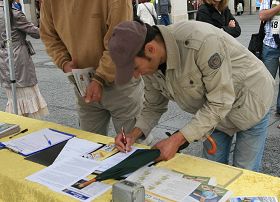 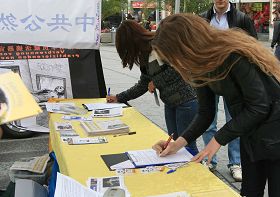 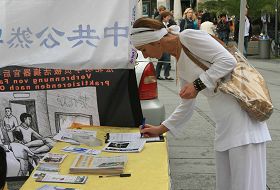 Many people sign a petition to stop CCP's violence

At the rally, passersby and tourists stopped to view pictures exposing the CCP's persecution of Falun Gong practitioners. They were also attracted to practitioners' demonstration of Falun Gong exercises. After learning that the CCP uses brutal methods to persecute such a peaceful group of practitioners, many of them signed the petition to stop CCP's violence. Quite a few immediately followed along to do the exercises, and also many mainland Chinese quit the CCP and its affiliated organizations on the spot.

In the afternoon, another rally was held by the practitioners to clarify the truth about the CCP's persecution. Practitioners read the newsletter from the German Falun Dafa Association regarding “July 20”. Fei Liangyong, Chairman of Global Democracy China Front, and Jürgen Thierack, Chairman of International Human Rights Munich Branch, delivered speeches to condemn the CCP's persecution.

Falun Gong practitioners: Working together to stop the CCP's atrocities

A practitioner read the newsletter from the German Falun Dafa Association. In the newsletter, it was pointed out that in order to persecute Falun Gong, the CCP set up the 610 Office, overriding all laws in China and employing every method to eradicate Falun Gong: over half a million practitioners have suffered severe human rights violations in labor camps; a large number of practitioners' organs were harvested when they were still alive; over 3,400 practitioners are documented to have died as a result of persecution in prisons, labor camps and brainwashing facilities; several million innocent practitioners have lost their jobs, dwellings and retirement pensions. Falun Gong practitioners call on people from all walks of life to pay attention to the persecution in China, and to work together to stop the CCP's violence.

Hearing such factual statements, many passersby from the Chinese mainland were shocked. Many of them took photos and more of them immediately expressed their desire to quit the CCP and its affiliated organisations.

A middle-aged lady from Hubei Province in China was very excited as soon as she saw practitioners' information desk and banners. She held one of the practitioners' hand with tears in her eyes, and said, “You are really so great, so remarkable. Thank you. I know Falun Gong and understand everything. You have been working very hard, and have done very well.”

The lady announced her resignation from the Youth League and hoped that practitioners will keep up what they are doing. After that Mr Chen, a Falun Gong practitioner said that he was moved very much after hearing the lady's words. He did not think he did a lot, but people who understand the truth expressed their gratitude with such sincerity. He believes that much more should be done to make more people aware of the facts about Falun Gong, to save more people.

Fei Liangyong, Chairman of Global Democracy China Front, stated in his speech that the CCP has persecuted Falun Gong for 12 years, and Falun Gong practitioners' peaceful appeals have moved heaven and earth. In fact, the CCP had always created disasters and suffering for Chinese people during its 62-year rule. The enslaved Chinese are increasingly awakening: a billion people have quit the CCP, the Youth League and the Young Pioneers. Quitting the CCP, making it collapse, and burying CCP's dictatorship is not far away.

In July 1999, Jiang Zemin ordered a nationwide suppression of Falun Gong, because the number of people who practiced Falun Gong exceeded the number of CCP members, which made Jiang extremely jealous. Falun Gong teaches people Truthfulness-Compassion-Forbearance; while the CCP rules by deception and force. Jiang claimed he would eliminate Falun Gong within 3 months, but he didn't realize that Falun Gong could never be defeated.

Now 12 years have passed. Falun Gong is still active and developing well across over 100 countries. Now Falun Gong has filed lawsuits against Jiang Zemin and other high ranking officials who have been involved in the persecution in over 30 countries successfully.

International Human Rights Representative: Calling on people from all walks of life to pay attention to the CCP's persecution of Falun Gong 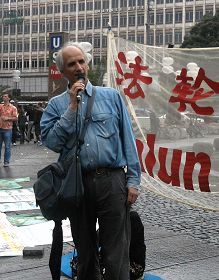 Jürgen Thierack, Chairman of the International Human Rights, Munich Branch, stated that, as a human rights organization, they believe that Falun Gong practitioners' human rights have been infringed upon. According to their many years of observation, they can confirm that Falun Gong does not use violence. Falun Gong suffers from CCP's extremely brutal and systematic persecution, and fabricating rumors and slanders is an important method employed by the CCP. Religious freedom is the focus of this International Human Rights Organization, and they call on everyone to join efforts to collect and disseminate informational materials.

“Eliminate the Divisions and Form One Solid Body”