Norway: Practitioners Hold Activities on July 20th to Raise Awareness of the Persecution of Falun Gong

(Clearwisdom.net) On the afternoon of July 20, 2011, the day that marks 12 years of the brutal persecution of Falun Gong by the Chinese Communist regime, practitioners in Norway held activities at the square in front of the Parliament.

While displaying Falun Gong banners, practitioners distributed leaflets and the Nine Commentaries on the Communist Party and other informational materials in Chinese, English, Norwegian and Italian to expose the Chinese Communist Party's (CCP) slander of Falun Gong and atrocities in the persecution. Meanwhile, some practitioners demonstrated the exercises to show the beauty and peace of Falun Dafa.

The event attracted many passers-by. Some stopped to look at the display boards and ask questions. Many people signed the petition form expressing sympathy and support for Falun Gong. 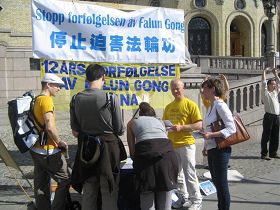 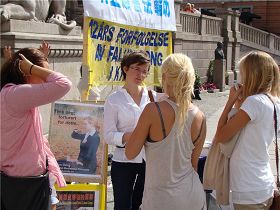 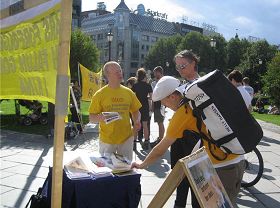 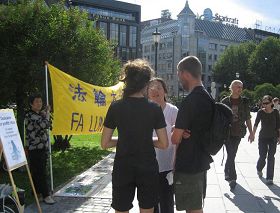 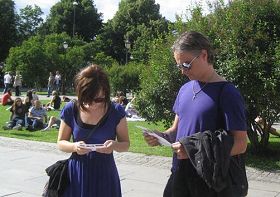 Raising awareness about Falun Gong in front of the Norway Parliament

Having accepted a leaflet from a practitioner, a gentleman from New Zealand said that he had heard about the CCP’s trampling of human rights without realizing the degree of cruelty. He said: "The Communist Party is the common enemy of mankind. Its nature is cruel, that’s why it does such cruel things." He told practitioners that no matter how inexpensive Chinese-made products were, he would not buy them because they were products of human rights abuses.

Another gentleman from the Norway Ministry of Defense said that previously Norway had growing trade relations with China. Since last year's Nobel Peace Prize was awarded to a dissident, which enraged the CCP, many businesses in Norway were restricted. He added: "Norway, as a democratic country respecting human rights, will not be intimidated by the behavior of the CCP. The CCP's actions prove its true nature."

Three South Korean female students from Shanghai, China told practitioners that in Mainland China they could not get any news about Falun Gong. Online searches returned only negative results. Today they were very glad to finally get truthful information.

The event lasted more than three hours. The practitioners were pleased to see so many people learn the facts about the persecution of Falun Gong and see through the CCP's lies.

On July 20, 1999, former CCP leader Jiang Zemin launched the brutal persecution of Falun Gong. To date, over 3,000 practitioners were tortured to death. Tens of thousands of Mainland China practitioners were illegally sentenced to prison, or sent to labor camps or brainwashing centers where they were pressured to renounce their faith. The CCP’s persecution of Falun Gong has lasted twelve years and still continues.