(Clearwisdom.net) On July 16, 2011, eight Korean civic groups and Falun Gong practitioners jointly held a rally at Seoul Plaza despite the rain. The rally condemned the 12-year persecution of Falun Gong by the Chinese Communist Party (CCP), and called upon the international community to join the efforts to stop the CCP-orchestrated, unprecedented human rights catastrophe soon. 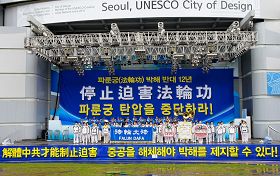 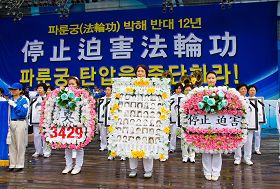 Practitioners hold wreaths with photos and numbers of practitioners who have died as a result of 12-years of persecution during the rally held at Seoul Plaza on July 16, 2011 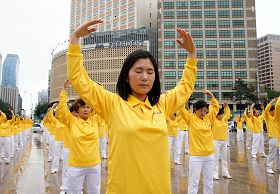 Practitioners perform the exercises during the rally held on July 16, 2011

Representatives from the eight civic groups attended and spoke at the activity, that was jointly held by the Korean Falun Dafa Association, and the Judicial Reform and Pan People's Association. 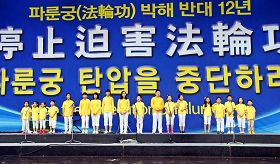 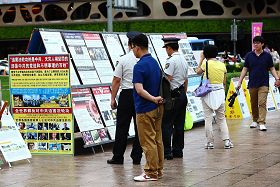 Photo displays at the rally 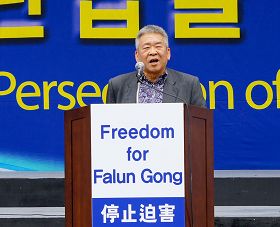 South Korean Christian Social Responsibility representative Pastor Hsu pointed out that if the persecution of Falun Gong taking place in China isn't stopped, there will be no future for the Korean people, and Tibetan, Mongolian and Uighurs will not have their pain ended. Pastor Hsu emphasized, “Helping innocent people who endure the persecution is a Christian's duty, and also basic morality and justice for a human being.” 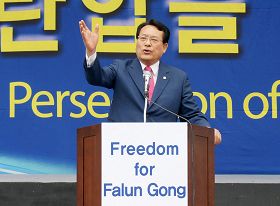 Mr. Kim Hyung-II, president of the National Force, who has served three terms as Member of Congress, stated that he had been aware of the sufferings of Falun Gong practitioners. He promised to pray for an end to the persecution of Falun Gong. 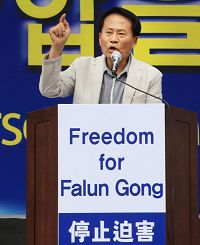 Mr. Yun, representative for Citizens Committee for Expelling Corruption from the Country

Mr. Yun, representative for the Citizens Committee for Expelling Corruption from the Country emphasized, “No crime is more vicious than killing innocent people.” He stated that the CCP blatant trampling of human rights will lead to its ultimate demise. 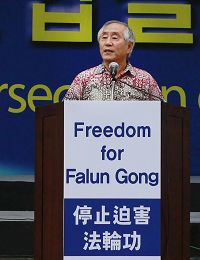 Human rights activist Mr. Kim stated that he had been aware of the CCP's shameful acts when launching North Korean human rights movement. He said that the persecution of the Chinese people is enough to show the CCP regime's brutality, especially their fear of peaceful and kind Falun Gong practitioners, which is enough to prove its cowardice. 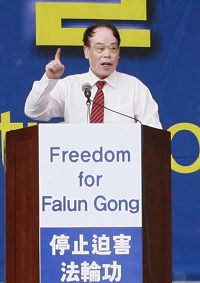 Mr. Wu called upon the Korean government and the public to stand up against the human rights abuses happening in China. He believes that the authoritarian regime will soon collapse. 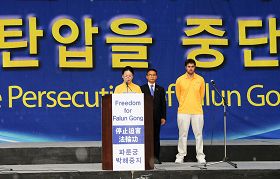 Representatives for different groups jointly signed a pubic letter issued to UN Secretary-General Ban Ki-moon and South Korean President Lee Myung-bak. Three requirements were raised with the president. First, distinguish between China and the CCP. Second, Chinese Embassy staff and CCP officials from the Ministry of State Security who are undermining Falun Gong activities in Korea should be given judicial handling Third, terminate deportation of Chinese national Falun Gong practitioners. The letter appeals to the UN Secretary-General, “We hope the UN General Assembly will pass resolution opposing the CCP's persecution of Falun Gong.” 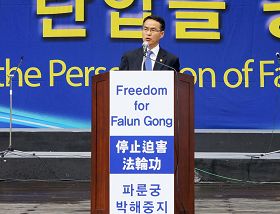 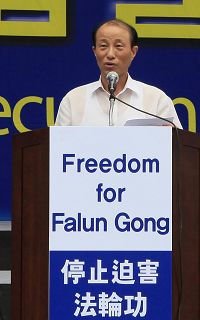 President Cheng of the Pan-Korean National Union of Judicial Reform 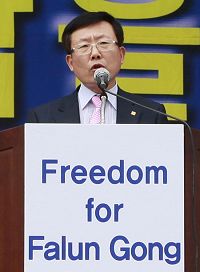 Mr. Han, representative from a group of North Korean Defectors

Dr. Wu, the Korean Falun Dafa Association spokesperson, stressed, “China's main body is 1.3 billion Chinese people, the Chinese Communist Party seized the power in 1949.” “We should clearly distinguish the CCP from China.” Dr. Wu said, “What we oppose is not China, but the CCP, because the CCP represses not only Falun Gong, but also traditional culture, Christianity and other religious beliefs, social justice, and individuals' conscience.” Dr. Wu said that holding the activity at Seoul Plaza, the heart of Seoul, the capital of Korea, will become a juncture to end the CCP's crimes against humanity.