(Clearwisdom.net) Mr. Jin Jie, 54, is a Falun Gong practitioner from Jiamusi City, Heilongjiang Province. He was illegally arrested on May 20, 2011, and held in a detention center, where he went on a hunger strike to protest the persecution and his condition weakened. He was transferred to the Suihua Forced Labor Camp on the morning on June 14, 2011. 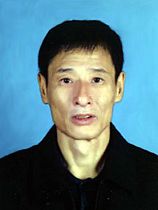 Mr. Jin Jie was distributing materials to clarify the facts about Falun Gong near the Computer Plaza around noon on May 20, 2011. The officers on duty at a nearby service desk reported him to the police. Mr. Jin was arrested and taken to the Xiangyang Police Department, where officers confiscated his cell phone. Policeman Yu Delong called Mr. Jin's brother-in-law from Mr. Jin's cell phone and lied that he was a taxi driver who had picked up the phone. He got Mr. Jin's wife's number and located her workplace. Shortly past 5 p.m. the officers took Mr. Jin to his wife's workplace and then took them both to the couple's home. The officers unlocked the door and searched the couple's home without any legal documentation, confiscating Falun Gong books, a computer, and other personal items.

Mr. Jin was then taken to the Xilin Police Station for interrogation. He was locked in a cell and forced to sit on an iron chair. Mr. Jin's wife was gravely concerned about his health, as he was suffering from stomach problems, but the officers ignored her pleas and sent him to the detention center.

On May 23, 2011, Mr. Jin's family went to the detention center to give him necessities. When they met him, they learned that he had begun a hunger strike to protest the unlawful detention. He appeared in an extremely weak condition, and his family worried that his life was in danger.

On May 30, 2011, his family went to the Xilin Police Station to ask for his release. The director of the police station dismissed them and said that Falun Gong cases were handled by higher authorities and he had nothing to do with these cases. He claimed that he was in a hurry and told Mr. Jin's family to leave immediately. The family went to the Jiamusi City Police Department the following day, where an officer in the legal section told them that the case had not reached there yet and told them to go to the Xiangyang Police Department, to which the Xilin Police Station reported. On June 2, 2011, the family went to the Xiangyang Police Department, where the chief informed them that police department had no jurisdiction over a person once he was taken to a detention center.

Mr. Jin had been force-fed for over 20 days while in the detention center, and his family had nowhere to appeal his unlawful detention and mistreatment. On the morning of June 14, 2011, he was transferred to the Suihua Forced Labor Camp.

“College Student: A Positive and Hopeful Outlook on Life (Photo)”