Handling the Interference in Hungary During the Chinese Premier's Visit

(Clearwisdom.net) From June 24-25, 2011, Chinese Premier Wen Jiabao made a two-day visit to Budapest, holding ongoing meetings with Hungarian parliamentarians. Hungarian Falun Dafa practitioners submitted an application for a permit to hold a peaceful demonstration to raise public awareness about the persecution in China. However, their application was unreasonably rejected by the Federal Police Headquarters. Realizing that time was tight and the interference great, practitioners did their best to take advantage of the opportunities they did have to peacefully make their presence known and clarify the truth.

Practitioners first turned to the Budapest court for a legal remedy, as the rejection of their application was unconstitutional, and it was clear the government was being pressured by the Chinese Communist Party (CCP). (See news article for further information: http://www.theepochtimes.com/n2/world/hungary-bans-falun-gong-protest-of-wen-jiabaos-visit-58068.html)

Although a separate demonstration was not permitted, Falun Dafa practitioners adhered to the police guidelines when they appeared at places the CCP delegation planned to visit. Standing near the Hungarian Parliament building, practitioners wore clothing bearing the words “Falun Dafa” and “Truthfulness-Compassion-Forbearance” to make the CCP delegation and supporters aware of the presence of Falun Gong, and as a form of peaceful protest against the CCP’s detention and torture of fellow practitioners.

Despite this, practitioners looked inward and spoke with the police throughout the day to clarify the facts. Each time, they emphasized they were not protesting against the Chinese Premier, but to appeal for the rights of practitioners detained in China and to ask the Premier to bring to justice the perpetrators of the persecution. Even though the police officers acted on orders from their superiors, they each had an opportunity through witnessing the truth to help practitioners by bringing the CCP supporters back in line or moving them away. 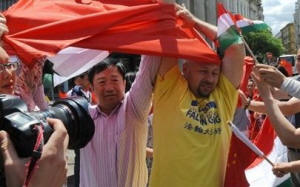 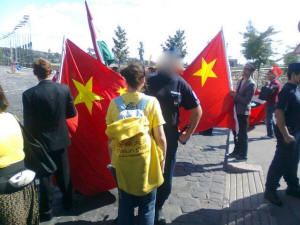 Practitioner clarifying the facts to police

In the future, as practitioners continue to clarify the truth to the government and police in Hungary, and as the interference becomes less, the Hungarian government must take a stronger stance in support of Falun Dafa practitioners' peaceful demonstrations. As can be seen from previous instances in other countries, how a government positions itself on basic issues in relation to the CCP and Falun Gong has an enormous effect on society.

The interference was not limited to the government's refusal to grant a permit for a demonstration. The only Chinese Falun Dafa practitioner in Hungary, Ms. Zhang Xiaoping, and her daughter received notice from the Hungarian Immigration and Citizenship Authority to visit the foreigner regulatory division at 8:00 a.m. the next day (Saturday, June 25), to provide information.

One staff member, who asked the Chinese practitioners for their identification documents, couldn’t believe it when told they had no passports. The accompanying practitioners told immigration staff that they did not have passports because the Chinese Embassy in Budapest had confiscated them almost 10 years before, after Zhang Xiaoping refused to sign a written guarantee statement to stop practicing Falun Gong.

Immigration staff went through various procedures that tested the patience of the practitioners, who had hoped to appear where the Chinese delegation would visit on that very day. But after an hour, one of the immigration staff said that a one-on-one interview was necessary with Ms. Zhang. The initial letter did not say anything about an interview, and practitioners were unclear about its purpose. Staff would not let accompanying practitioners, or even Ms. Zhang’s daughter, be present at the interview with her. Practitioners kept calm and cooperated, believing that nothing bad could happen. Without an interpreter, Ms. Zhang boldly participated in the interview. Initially, other practitioners were moved to a neighboring area, but a short while later they were moved to a separate building where they were held for six hours--and had to answer various questions.

The waiting practitioners used this time to clarify the truth. They spoke with each of the immigration staff present, explaining in detail the reasons behind their appeal and how their planned protest had been denied by the police. They spoke about the beauty of Falun Dafa and the brutal persecution and organ harvesting in China. Each staff member listened attentively, and many of them were deeply moved by the sacrifices of the practitioners who had died from torture in China.

One of the immigration staff, a young man, had heard of Falun Dafa before and even looked it up on the Internet. He also acknowledged the evidence of the persecution. He said, “I’m interested in these things, and it’s good, really good [to have had this conversation].”

Other staff members were more skeptical. An older male staff member described the principles of Truthfulness-Compassion-Forbearance as a “slogan,” saying that he did not understand what the words actually meant. A practitioner explained with ease, “Not long ago, a six-year-old boy asked the same thing. I told him, 'Always be kind, honest, and a good child; tell the truth; if others hurt you, don’t hurt them back and don’t ever hurt anybody; listen to your parents and be understanding, and be respectful of others.'” The older staff member smiled after hearing this, and said, “In today’s world it is neither worthwhile nor possible to be honest, because others will take advantage and everyone will just walk all over you.” However, he later accepted that good people serve as role models who show another way of living, and that it is worthwhile to be a good person. One practitioner told the older staff member a personal story about his parents, around the same age, who were born during the former Communist regime and soaked deeply in Communist ideology--the exact opposite of Truthfulness-Compassion-Forbearance. The personal story, along with the field of practitioners, helped awaken the staff member and compelled him to stand next to the young practitioner and smile, thank him, and ask for more information.

Other staff members were also interested in hearing about the persecution and the practice, and took the initiative to come talk to the practitioners.

After the practitioners clarified the truth during the interviews, immigration staff found everything to be in order. They even apologized for the inconvenience and for their initial behavior. They wished them “all the best in their future work,” smiling as they saw the practitioners off, with some saying that they hoped that the persecution in China would end soon.