(Clearwisdom.net) Mr. Wu Yang, also known as Wu Zhijun, is a Falun Gong practitioner from Chifeng, Inner Mongolia. He was arrested while he was distributing Shen Yun Performing Arts DVDs in Beijing on April 22, 2009. Beijing police arrested his wife, Ms. Sun Ming, the same day and tortured her to death, then claimed that she died from jumping off a building. A court held trials of Mr. Wu on February 14, 2010 and April 9, 2010, and sentenced him to seven years in prison. The authorities withheld Mr. Wu's whereabouts from his family until May 2011. Mr. Wu is imprisoned at the Inner Mongolia 2nd Men's Prison. 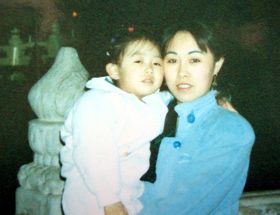 Ms. Sun Ming and her daughter 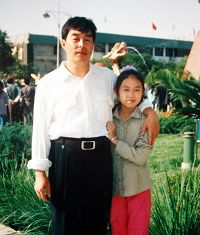 Beijing Fengtai Court gave no verdict after the April 9, 2010 trial. The court kept saying the case was in process when answering phone inquiries from the lawyers and the family. It wasn't until October 2010, six months after the trial, that the family got an anonymous phone call telling them that Mr. Wu was sentenced to seven years in prison. By then, the appeal grace period was over.

In May 2011, the family was finally informed that Mr. Wu was imprisoned in the Inner Mongolia 2nd Men's Prison in Hohhot. The prison refused to allow his family to visit, claiming it needed approval from the 610 Office. But the 610 Office would not approve it.

“My Experience of Using Righteous Thoughts to Subdue Evil”