A Mother's Cry for Justice (Photos)

(Clearwisdom.net) My name is Wang Shaoping and I live in Matuodian Township, Changli County, Qinhuangdao City, Hebei Province. My son Zhou Xiangyang was sentenced to nine years in prison because he believes in Truthfulness-Compassion-Forbearance and wants to be a good person. He is imprisoned at Gangbei Prison in Tianjin, where he was tortured with electric batons, beaten, had poured cold water over him, endured a torture method called “Solitary Room and Ground Anchor," and more. He was in critical condition several times. On July 28, 2009, officials from Gangbei Prison told me to pick him up from prison, because he was released on medical parole. Before he could completely recover, they arrested him again at home and took him back to Gangbei Prison on March 5, 2011. Currently, he is extremely weak, has lumps in his abdomen, chest pain, hematuria, and other ailments. My son has been on a hunger strike for about one hundred days, which he started when they incarcerated him in prison. His life is being sustained by force-feedings and I.V. infusions. 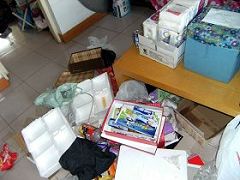 Mr. Zhou's home after being ransacked

My son had to be carried out by his brother-in-law when he was released in 2009. He was very weak, skinny and pale, and at 5' 9” weighed only 86 pounds. His teeth had turned black. He could only talk in a very low tone and was only able to take in liquid food, since his stomach had shrunk. Behind his ears, and on his hands and legs were scars from being shocked with electric batons. He could only walk slowly.

My son described the “Solitary Room and Ground Anchor” torture method as follows: A small cell is used specifically to torture Falun Gong practitioners. A practitioner is placed in the cell 10 feet long, 3 feet wide, and 5 feet high. The cell does not have a window, and it is dark and damp inside. The cell contains a 6-foot-long board, which is set up about 1 foot above the ground. The practitioner is forcefully laid on this board, with his arms extended in a “V” shape and his hands cuffed to rings, which are attached to the ground. The practitioner's feet and calves hang above the ground, and his feet are locked into shackles that are attached to the ground. The handcuffs and foot shackles are put on very tight and not even a small space is in between them. After being “anchored" around the clock, the practitioner suffers great pain in his arms and back, and his heels that touch the ground are torn. This continuous pain far exceeds the pain from being shocked with electric batons.

My son described his experience, “Three criminal inmates watched me, and one sat over my head and stepped on my hands. It was also an insult to have my head under his bottom. The other two inmates sat near my feet and kept reading articles which slandered Falun Dafa. They continued to beat and insult me. Some even threatened to kill me. They kept pushing my legs down, which caused extreme pain, since my calves were hanging halfway in the air. They said that they were 'helping' me to exercise my bones by unlocking me from the ground and trying to break me down at my lower back, my legs, and my arms. This too was extremely painful. The head guard, Song Xuesen, stayed outside the room and listened. When it was quiet, he threatened the inmates, 'Don't you still want to do it? Don't you want to reduce your prison term? If you don't want to do it, then just get out.' When the guards were not satisfied with the torture performed by a criminal inmate, they took this inmate back to his cell and punished him. He was then tortured by guards and other inmates in his cell and forced to perform extremely dirty work. Placed under this great pressure and given the incentive of a reduced prison term, inmates tried numerous ways to torture me. I could barely stand those torture methods.”

The “Ground Anchor” torture is a common torture method used in Gangbei Prison, and was introduced to all the prisons in Tianjin. After Zhou Xiangyang was released from the “Ground Anchor" torture, he couldn't stand up straight, and was not able to straighten his back for several months.

My son is a good-tempered and honest person. He never fought with others or complained when being bullied by others. He graduated from Northern Jiaotong University. His company later sent him to Tianjin University for further education. He has a double degree in Construction Engineering and Financial Investment. He was in the first group to be certified for becoming a National Cost Engineer. While he worked for the Ministry of Railways in the Third Survey and Design Institute in Tianjin, he made great contributions to the institute's projects. He was promoted to Engineer at the age of 26. After he started to practice Falun Gong, he became even more dedicated to his work. He never accepted special benefits from work and would not accept any money from people who asked for his help (this is common in China). He was highly regarded by his managers, co-workers, and clients. However, this accomplished young man was sentenced to one year in a forced labor camp. Later the term was extended for another year, and thereafter changed to nine years in prison.

My kind and promising son almost died several times due to being tortured. Whenever I think about his near-death situation after he was released from Gangbei Prison in 2009, my heart aches and I cannot help but to cry. Currently, my son's health is getting worse again, but prison officials refuse to release him. Are they planning to release him only when he is on the brink of death again?

I heard that someone by the name of Zhu Wenhua was beaten to death in the same prison. I also heard from an attorney that three Falun Gong practitioners died there when officers put a tube into their trachea in order to force-feed them. My son is in the midst of this danger. Every time I visited my son, officials from the prison tried to make things difficult for me. So I decided to wear a vest with a description of the injustice that is happening to my son written on it. I stayed outside the prison gate for almost a day, and fainted in the end. Only then was I allowed to see my son, even though it is my right to visit him.

My son's girlfriend, Li Shanshan, also appealed for justice for him. However, officials from this prison claimed that she was “threatening the prison” and sentenced her to fifteen months in a forced labor camp, with the charge of “suspected subversion of the state.”

Ms. Wang Shaoping wearing a home-made vest to appeal for justice for her son

My son was willing to sacrifice his youth in order to keep his beliefs and his right to defend justice. He should be respected for this. I cried during my last visit when he told me that he was “meat on someone's chopping board.” To tell the truth, I am proud of my son, and in the near future, my son will receive just treatment.

Without following any legal procedures or notifying his family, law enforcement officers just took my son away and ransacked my home. They confiscated 13,000 yuan of business and working capital and materials worth over 10,000 yuan. My family kept searching for my son, but the police from Tangshan City, Tianjin, and Gangbei Prison kept pushing us around and some even lied to us. I am in my sixties. In order to find out my son's whereabouts, I sat near the gate of Gangbei Prison for two days. Finally, someone told me that he was incarcerated in that prison, but I was not allowed to see him. (Afterwards I made the vest and went back to the prison again.)

This time when my son was tortured, Li Guoyu, the deputy warden at Gangbei Prison, was involved in dereliction of duty and Zhang Shilin, the political instructor of the Fifth Division, was involved in torturing him. Both of them should be brought to justice.