Review of Falun Gong Human Rights Lawsuits in Canada and the U.S.A. (Photos)

(Clearwisdom.net) The Chinese Communist Party (CCP) launched the persecution of Falun Gong in China in July 1999. Since then, the CCP has tried to use its embassies, consulates and other organizations overseas to promote its propaganda against Falun Gong all over the world. Meanwhile, the CCP has also tried to exert pressure on governments and organizations in the free world, inciting hatred towards Falun Gong. However, Falun Gong practitioners persist. They keep clarifying the truth to the public, file lawsuits against human rights violators overseas, and gain support from all directions. In this article, we review a few cases in Canada and the U.S.A.

On October 19, 2010, the British Columbia Court of Appeal struck down the city bylaw that prohibited Falun Gong practitioners from placing their protest billboards and hut in front of the Chinese Consulate in Vancouver, and ruled it to be unconstitutional and against the practitioners' right of free speech granted by the Canadian Constitution.

British Columbia Court of Appeal judge Carol Huddart announced that all three judges had reached an agreement that it was a mistake for the lower level Supreme Court to require Falun Gong practitioners to remove their protest signs in front of the Chinese Consulate. The Falun Gong practitioners' protest with billboards and a small hut is protected by the Canadian Constitution, which grants them the right of free speech. It is unconstitutional for the city bylaw to prohibit them from expressing their opinions with structures. 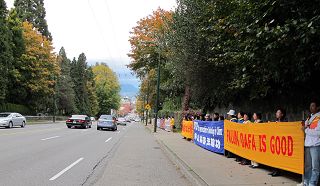 Protest in front of the Chinese Consulate in Vancouver

Since 2001, Falun Gong practitioners in Vancouver have protested the communist regime's brutal persecution around the clock in front of the Chinese Consulate. In 2006, pressured by the Chinese regime's authorities, then mayor Sam Sullivan proposed to the B.C. Supreme Court to pass an injunction requiring the removal of the protest billboards and the blue shelter outside the consulate, based on the city transportation bylaws. Vancouver practitioners appealed the decision. In January 2009, the B.C. Supreme Court made the judgment to order the practitioners to dismantle their structures, so they appealed again to the B.C. Court of Appeal. On October 19, 2010, the B.C. Court of Appeal ruled that the city bylaw prohibiting protest structures is unconstitutional.

Lawyer Joe Arvay, who appealed for Falun Gong, said: "The court has ruled that it's unconstitutional for the city of Vancouver to prohibit Falun Gong's protest site." In the ruling statement, the city is allowed to have six months to modify its regulatory bylaws. "Meanwhile, the practitioners can now apply to the city and ask for a location to place their protest boards and restore their small blue hut at the front of the consulate. The city's decision has to be consistent with the Constitution."

Twenty-four hours per day, seven days a week, Vancouver practitioners take turns protesting the brutal persecution by sitting quietly and peacefully in front of the Chinese Consulate. No matter if it's in freezing winter or the heat of summer, raining or snowing, the practitioners have never stopped their peaceful protest. One female practitioner has spent five Christmas Eves in front of the consulate.

Many practitioners have such experiences: When they clarify the truth of Falun Gong to a stranger, that person would say, "Oh, I know Falun Gong." When asked where they heard about Falun Gong, many people said they have seen Falun Gong's display boards on Granville Street.

When a bus with Chinese tourists passes by, the tour guide would automatically point out to them: This is the Falun Gong protest site, that is the Chinese Consulate.

The Human Rights Tribunal of Ontario ruled on April 27, 2011 that the Ottawa Chinese Senior Association (respondent) breached the Ontario Human Rights Code and discriminated against Ms. Daiming Huang (complainant) on the basis of her belief.

Ms. Huang is 78 years old. She immigrated to Canada in 1992 and started practicing Falun Gong in 1998. After practicing, her illnesses of sinusitis and spondylolisthesis disappeared. Huang was attending a New Year’s celebration at the Chinese Senior Association on December 29, 2001, when she noticed that a Chinese Embassy official in attendance was looking at her. Minutes later, the secretary of the association, Feng Xu, approached her and told her that the board of directors had decided that they would no longer accept Falun Gong practitioners. 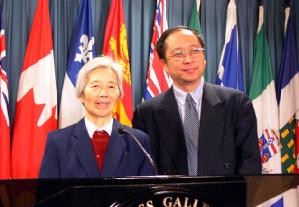 Ms. Michelle Flaherty, vice chairman of the Tribunal ruled, “The Falun Gong is a creed and the Association offers a service within the meaning of the Ontario Human Rights Code. I conclude that the respondents breached the Code and discriminated against the complainant on the basis of her creed. The Tribunal orders the corporate respondent to pay the complainant the sum of $15,000 for loss arising from the infringement of her rights under the Code.” 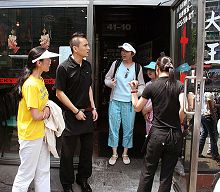 On June 1, 2008, Sun Zhenyu, Huang Wei, and Huang's daughter, Feng Xinye, went to a New York City restaurant for a bite to eat after attending a Falun Gong rally near the library in Flushing.

Sun was wearing a yellow t-shirt saying "Falun Dafa is Good" and "Truthfulness-Compassion-Forbearance," the core tenets of the spiritual discipline, in Chinese and English.

Employees soon made it clear that the three women weren't welcome. "We don't sell to Falun Gong," the man taking orders said, according to Sun and documents of the judgment.

When pressed for an explanation, he said simply, "We're just not going to sell," in Chinese, before holding his arms wide and shooing the three out the door, shouting, "Get out of here!" pointing at the exit.

Huang Wei's daughter, Xinye, who was nine at the time, was confused and scared at their treatment, and began to cry.

Sun, 48, who came to the U.S. in 1992 and works as a biologist, said she found the situation "very unpleasant" and "humiliating."

"I'd never experienced this kind of thing before," she said in an interview. "I never thought this kind of thing could happen, being in America so many years. Any religion, any belief, shouldn't be discriminated against here in the U.S."

The New York State Division on Human Rights handed down its ruling on Oct. 2, 2009, ordering the Lucky Joy restaurant in Flushing to pay damages and prominently affix an anti-discrimination poster provided by the human rights body. Ms. Sun, Ms. Huang and Xinye, were each awarded $7,000 in damages. 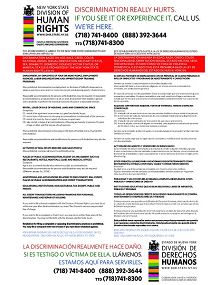 The poster starts with the words "Discrimination Really Hurts," in red.

In addition, the restaurant is required to establish anti-discrimination training and procedures.

However, the verdict was not issued within six months as the judge promised. On December 7, 2005, over two years after the final hearing, the court issued the verdict, saying that the plaintiffs' evidence was not sufficient to draw a conclusion.

The practitioners filed an appeal with the Quebec Court of Appeal, the highest court in Quebec. The court issued its verdict on May 14, ruling La Presse Chinoise guilty of libel.

On February 3, 2004, the Ontario Superior Court began proceedings for the libel lawsuit filed by Toronto Falun Gong practitioner Mr. Joel Chipkar against the Deputy Consul General of China in Toronto, Mr. Pan Xinchun. Defendant Pan Xinchun was convicted of libel and ordered to compensate for losses he caused to the plaintiff. 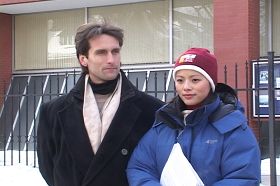 Joel Chipkar and his wife

Pan Xinchun defamed Falun Gong practitioner Joel Chipkar in a letter that appeared April 25, 2003, in the Toronto Star. Pan's letter was a response to an earlier letter by Mr. Chipkar that berated the Chinese government for covering up the SARS epidemic, as they do the persecution of Falun Gong. This coverup helped SARS to spread worldwide where it killed Canadians as well.

At the February ruling, the presiding judge concluded that Pan was not acting in his official capacity when he made statements about Mr. Chipkar and was therefore not protected by diplomatic immunity. Pan did not attend in his defense. The judge awarded Mr. Chipkar $1,000 for the defamation and compensation for his legal fees that amounted to $10,000.

"This ruling sends a clear message that the promotion of China's persecution of Falun Gong in Canada will be condemned by the Canadian courts. I am hopeful [this case] will draw the attention to the community at large of the wrongful promotion of hatred in this country," said Peter Downard, Mr. Chipkar's lawyer.

“Taiwan: Clarifying the Truth of Falun Gong at Taipei 101 (Photos)”