(Clearwisdom.net) Taiwan’s Chunghwa Telecom may not renew its contract with New Tang Dynasty Asia Pacific (NTDTV AP) Television because of the pressure from the Chinese Communist Party (CCP). NTDTV broadcasts over Chunghwa's satellites can be viewed in mainland China. Many people see the situation as a disgrace to freedom of the press, and at the same time as limiting the Chinese people's right to know. Chunghwa Telecom's refusal to renew is tantamount to helping the CCP persecute the Chinese people.

U.S. hearing shows concerns over the CCP's violation of freedom of the press

On June 2, 2011, the House Committee on Foreign Affairs held a hearing of all members. Rep. Gus M. Bilirakis from Florida mentioned media reports about CCP interference with the media of its Asian neighbors. He showed concern over the issue.

Congressman Gus M.Bilirakis stated, “Recently media reports from the Economist, BBC and Taipei Times disclosed that Beijing pressures some of its Asian neighbors to interfere with and even stop some independent media in these countries from broadcasting either locally or to mainland China. Such media include Radio Era Baru in Indonesia, Sound of Hope Radio network in Vietnam, and New Tang Dynasty TV in Taiwan, this is particularly troublesome for two of the three democratic countries.”

Sophie Richardson, advocacy director of Human Rights Watch's Asia Division said in an interview, “These cases have been reported. I think it clearly shows that the Chinese government has made efforts to shut down transmissions by particular kinds of media outlets affiliated with Falun Gong, and we seem very concerned about the efforts to make sure those can be broadcast either in mainland or to Chinese speaking communities across Southeast Asia.”

The U.S. government has long been concerned about the CCP's suppression of democracy and freedom of its Asian neighbors. Rep. Bilirakis wrote to the Indonesian Government together with two other congressmen last year, and his congressional assistant had also met with Indonesian Embassy to address the CCP's interference with Radio Era Baru. The U.S. Embassy in Indonesia has been concerned about the interference with Radio Era Baru. At present, Taiwan's representative office –Taipei Economic and Cultural Representative Office in the U.S. in Washington DC has repeatedly received inquiries of various ways from offices of the Senate and the House of Representatives in the U.S., to express their deep concern over interference in the renewal of the NTDTV contract.

Canadian MP: Freedom of the press is the universal value 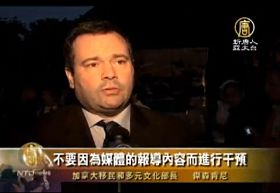 Jason Kenney, Minister of Citizenship, Immigration and Multiculturalism, participated in a commemorative activity for the Tiananmen Square Massacre held in Toronto. When he learned that NTDTV's renewal of contract with the Chunghwa Telecom met with frustration, he stated, “We believe in freedom of speech, and we believe it is a universal value. I don't know the particulars of this contractual arrangement, but we would hope that countries that believe in freedom of speech will give practical expression to it, and will not be censoring the station because of the content.”

It affects Taiwan's freedom of the press and human rights development

Liao Fu-Te, Vice President of the Taiwn Association of Human Rights, questioned Chunghwa Telecom's stated reason for refusing to continue servicing NTDTV. Chunghwa claims it is because of insufficient bandwidth. He said it should be a serious matter if the Chunghwa Telecom's business deals with the CCP will stifle Taiwan's freedom of the press and other human rights development. 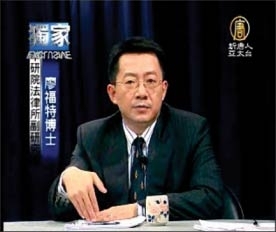 Dr. Liao said in a recent interview that he questioned that there could be such a case that a customer who wants to rent a channel couldn't be granted one. Chunghwa Telecom's way of doing things is totally inconsistent with commercial practices and doesn't conform to the development of democracy. He pointed out that Chunghwa should bear social responsibility, and even the responsibility for the development of the entire country's freedom of the press. Chunghwa should sincerely face the NTDTV's contract renewal issue, and must make clear explanation to the public what criteria it adopts to measure it.

Many believe that CCP interference made Chunghwa terminate its contract with NTDTV. Dr. Liao pointed out that it is matter of great concern. The CCP thus controls the contents of Taiwan's press and suppress Taiwan's freedom of the press.

A milestone for Taiwan's freedom of the press

Chuang Feng-chia, Deputy Editor-in-chief of Central News Agency, believes that if NTDTV can pull through its contract renewal with Chunghwa Telecom, it will become a milestone for Taiwan's freedom of the press.

Taiwan Executive Yuan and Legislative Yuan have promised that NTDTV be carried on ST-2, but Chunghwa's attitude is still uncertain. Mr. Chuang said in a televised interview that Chunghwa's behavior has affected Taiwan's freedom of the press. He is worried that if Chunghwa disregards the government's promise, its chilling effect on the media sector will be comprehensive and far-reaching, the media will put more limits on itself, and will try to not cover negative news on China and news related to Falun Gong. Mr. Chuang stressed that NTDTV's contract renewal is not only a matter of NTDTV, but also a crisis for all media and people in Taiwan, so everyone should step forward to express their support for NTDTV.

Mr. Chuang believed that Taiwan needs more independent media, if NTDTV can pull through its contract renewal case, it will establish a milestone for Taiwan's freedom of the press, and other media outlets won't be worried for criticizing the CCP.

““I Am a Little Dafa Disciple””