When Ms. Lu had just arrived at Hunan Women's Prison, she continued practicing the Dafa exercises and studying the Fa, activities that were spotted by the guards. The guards took away Master's articles from her and handcuffed her. Ms. Lu had to resort to reciting the Fa from memory. However, the guards beat her and slapped her on the face whenever they saw her mouth moving or even if she focused on something. She was forced to face a wall for 24 hours and was not allowed to close her eyes. Otherwise, the guards put cologne or some balm on her eyes. Because her hands were handcuffed, she was unable to wipe them.

Ms. Lu was later sent to the sixth division and forced to watch programs that slandered Dafa and Master Li. The guards also tried to force her to write a guarantee statement promising to give up practicing Falun Gong. Ms. Lu refused the guards' demands. As a result, she was handcuffed and forced to stand up around the clock. She was forced to stand for one month and not even allowed to sit down or take a rest. During this time her entire body became swollen. When the guards asked her if she was going to write the guarantee statement, she replied, "No," and was then handcuffed behind her back. Finally, her left arm turned dark and the bone of her right hand broke through the skin. She was in so much pain that she unwillingly agreed to be “transformed.” When she was untied, her right hand was dislocated. 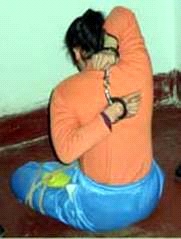 Torture reenactment: Carrying a sword behind the back

After Ms. Lu was released from the brainwashing center, she was transferred to the first division. When she arrived there, a guard forced her to answer questions and curse Master Li during the first hour. In that hour, Ms. Lu wrote a declaration saying that the guarantee letters she wrote while in the brainwashing center were invalid. The guards soon ordered other prisoners to beat her. In order to force her to give up cultivation, the guards ordered other prisoners to torture her in a “water cell.” The prisoners filled a big bucket with water and held Ms. Lu's head in it until she could not breathe. This was repeated many times. In winter, several female prisoners stripped her clothes off completely and continuously pushed her head in and out of the water. Ms. Lu asked the prisoners not to do it but they didn't listen to her. They didn't even let her wear the wet clothes. This torture occurred twice. The prisoners didn't stop until they were tired. Afterwards, Ms. Lu was handcuffed and forced to stand. She was often tortured in this way. Her hands repeatedly became infected and she could only wash her clothes with her feet because she was unable to raise her right hand.

Even under such conditions, the guards ordered prisoners Chen Qun, He Lianhua, and Liu Yan to force Ms. Lu to work. Every day Ms. Lu peeled beans from 6:00 a.m. to 4:00 a.m. the next morning. She was not allowed to sleep without finishing the task and couldn't carry anything with her hands. After the doctor confirmed that her arm was broken, the guards reduced her workload a bit. However, Ms. Lu still often couldn't finish the task and often went to sleep at 5:00 a.m.

The guards later ordered Ms. Lu to weave summer sleeping mats. She did this while reciting Master Li's articles in her mind, which were originally found by other prisoners. As a result, she was beaten. Because she could not finish the task, several prisoners carried her and threw her into the air, which broke her tail-bone. The prisoners often said that Ms. Lu pretended to have injuries, until her condition was confirmed two months later during a physical examination. She was in severe pain and could not even turn over.

After the prison hospital verified that Ms. Lu's hands and back were injured, her workload was reduced a bit. However, she still could not sleep because she was in so much pain The prisoners beat and cursed her as long as she recited the Fa and sent forth righteous thoughts. The guards also instigated the prisoners to force her to take sleeping pills until she was released so the prisoners forced her to take the pills and checked to see if she swallowed them by looking in her mouth. Ms. Lu felt sleepy all day long and could not finish her tasks or recite Master Li's articles. She hid hot pepper in her pocket at mealtime and ate a bit when she felt sleepy. She sometimes wanted to add tea leaves to water to keep herself awake but the prisoners discovered what she was doing and did not allow her to take hot pepper or tea. Sometimes, they even stuffed her mouth with a rag which was used to clean toilets.