Canada: Members of Parliament Congratulate Falun Dafa’s Wide Spread All Over the World

Minister of Citizenship and Immigration

Greetings from the Minister of Citizenship, Immigration and Multiculturalism

I would like to extend my warmest greetings to all those celebrating the 19th anniversary of the introduction of Falun Dafa to the public. On behalf of Prime Minister Stephen Harper, I would like to thank the Falun Dafa Association of Canada for your unwavering devotion to our nation-the open and diverse society we are proudly building together.

Since it was introduced to the public in 1992, the Falun Dafa movement has been rapidly spreading worldwide. Today, millions of people around the world gather in their communities to celebrate their heritage and to strengthen the core principles of Falun Dafa: Truthfulness, Compassion and Forbearance. In Canada, Falun Dafa practitioners actively promote understanding, tolerance and friendship among all members of our diverse society, which greatly contributes to the advancement of Canadian multiculturalism.

We, as Canadians, always seek to better understand each other’s cultures and traditions and we constantly look for ways to make everyone a part of the success of Canadian pluralism. As Prime Minister Stephen Harper stated: “Canada has been immeasurably enriched by such a broad array of ethno-cultural traditions. Each community is part of the cultural diversity that is one of Canada’s greatest strengths in this globalized world.”

As the Minister of Citizenship, Immigration and Multiculturalism, I would like to thank the organizers of this great event for sharing with all of us the principles, philosophy and traditions of Falun Dafa.

My very best wishes for a great celebration!

Minister of Citizenship, Immigration and Multiculturalism 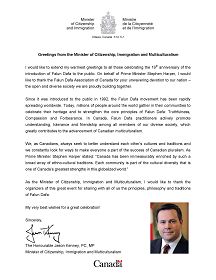 As you mark the 19th anniversary of the introduction of Falun Dafa to the public, I would like to extend my most sincere greetings as you celebrate Falun Dafa Month.

Canadian pluralism only benefits from sharing the teaching of Mr. Li Hongzhi. It is my distinct pleasure to commend all of you for your commitment and dedication. 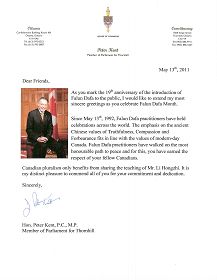