(Clearwisdom) Yeni Aktuel (New Modern Times) is one of the oldest and most popular magazines in Turkey. An article introducing Falun Gong and telling about the persecution in China in great detail was published in the April issue. 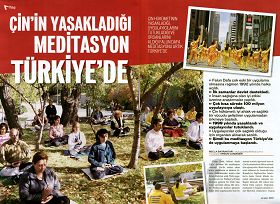 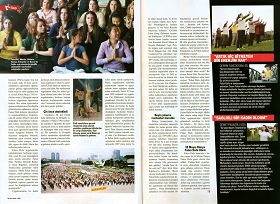 A detailed article about Falun Gong

The reporter interviewed several local Falun Gong practitioners. The article noted: “Falun Dafa, also called Falun Gong, is an ancient Chinese cultivation practice based on the principles of Truthfulness-Compassion-Forbearance. Mr. Li Hongzhi introduced it to public in May 1992. In seven years, more than 70 million people joined the practice, and benefited from it both physically and mentally.”

The article pointed out that the Chinese government used to support Falun Gong and issued several awards honoring the practice and Mr. Li Hongzhi for its amazing effects on healing diseases and improving one's moral standard.

The article highlighted the fact that many Falun Gong practitioners in China were and are being arrested and sent to forced labor camps or mental hospitals, while others have been sent to brainwashing centers and sentenced to jail or prison and badly tortured. The CCP has even harvested organs from living practitioners for profit. David Kilgour and David Matas, two Canadian politicians and human rights activists, collected evidence attesting to the organ harvesting.

The article mentioned that May 13 is World Falun Dafa Day, and practitioners all over the world will hold celebrations. The article said that practitioners in Turkey have been trying to call upon the government and public to pay more attention to the persecution. They peacefully clarify the truth of Falun Gong as they cultivate themselves.

“Thanks to Falun Dafa, My Mother Breaks Through a Brush With Death”