Father and Daughter Die as a Result of Persecution (Graphic Photos)

Mr. Hu Dianxin Died after Going to Beijing to Appeal for Falun Gong

On December 6, 2000, Mr. Hu Dianxin and his wife Ms. Cui Yuzhi, along with daughters Hu Yanrong and Hu Yanli, went to Beijing to appeal for an end to the persecution of Falun Gong.

As the main roads were blocked by police, they decided to walk. It was a long journey. They had information pamphlets about Falun Dafa in their backpacks. They talked to people and posted information along the way. When they were half way there, they were arrested by officers from the Songlingzi Police Station in Lingyuan City and were taken to the Lingyuan City Public Security Bureau.

At the Lingyuan Police Station, Wu Guoen, director of the Beilu Township Police Station, beat Ms. Hu Yanrong until she was black and blue. Mr. Hu Dianxin was then summoned. They slapped him in the face repeatedly while interrogating him. Afterwards they were sent to the detention center.

At the Songlingzi Police Station, the police took away the 380 yuan that Mr. Hu had with him. Witnesses said that they were all one or two yuan notes. It was their hard-earned money and the savings of the whole family.

The family was detained for more than a month. On January 23, 2001, the day before the Lunar New Year, Mr. Hu Dianxin and his wife were released, but officers from the Beilu Township Police Station continued to harass them. On February 8, 2001, Mr. Hu died as a result of the mental anguish caused by the persecution. He was 62 year old.

Ms. Hu Yanrong, however, was detained at the Lingyuan Detention Center for eight months and was then sent to the Masanjia Forced Labor Camp. Her sister Ms. Hu Yanli was detained at the Lingyuan City Detention Center for four months until her husband paid a fine of 4,000 yuan. At that time, her son was only eight years old. Her husband became mentally unstable as a result of the persecution.

Ms. Hu Yanrong Died as a Result of Persecution by Officers from Lingyuan City Police Station 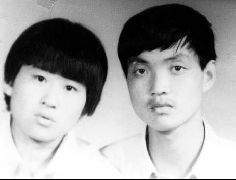 On August 1, 2007, Chen Zhi of the Domestic Division of Lingyuan City led 20 police officers to surround the home of practitioner Ms. Guo Fengxian. The officers arrested all practitioners inside, which included Ms. Hu Yanrong, Ms. Hu Yanli, and sister-in-law Guo Xianhua. The police had metal clubs, shackles, and electric batons. Ms. Hu Yanrong was brutally beaten. According to the police, Ms. Hu Yanrong jumped out of the vehicle in an attempt to escape, but fell to the ground, causing brain damage. She had two surgeries at the hospital in Lingyuan Prison, but died on August 5. She was only 42.

Ms. Hu Yanrong after her death

The Suffering of Ms. Hu Yanli at the Masanjia Forced Labor Camp

After being held at the Lingyuan City Detention Center, Ms. Hu Yanli was sentenced to one year of forced labor. On September 20, 2007, she was taken to the Masanjia Women's Forced Labor Camp in Shenyang.

In March 2008, when Ms. Hu Yanli refused to write a monthly report required by the labor camp authorities, Liu Guorong, the head of the section took her to the washroom and slapped her face repeatedly. She fell to the ground with her nose bleeding. Liu then kicked her in the head, feet, face, and chest. The next day, Ms. Hu was not able to get up. She asked to be checked by a doctor, as she felt pain in her chest. Her request was ignored by Liu Guorong for two weeks. She was not allowed to see a doctor until April 10. At the Masanjia Forced Labor Camp clinic, the doctor said everything was fine. Ms. Hu did not receive the x-ray report, nor any diagnosis. She was sent home on July 29, 2008. More information about Ms. Hu Yanli can be found at

The Persecution of Ms. Hu Yanjin and Ms. Guo Xianghua

After Mr. Hu Dianxin died, Ms. Cui Yuzhi moved in with her son, Mr. Hu Yanfu. Since her daughter-in-law was also jailed, the son invited his sister Ms. Hu Yanjin to live with them to help look after the mother.

Late one night, officers from the Lingyuan City Public Security Bureau, led by Chen Zhi, climbed over the wall and jumped into the yard. Ms. Hu Yanjin was already in bed when they broke into the house. The police forced her to get up. The brother protested and the mother also shouted at them. “You have already murdered one of my daughters, you want to kill this one, too?” They had to leave. To avoid being arrested again, Ms. Hu Yanjin was forced to leave home and live elsewhere.

In order to extort more money from the family, the police continued to hold Ms. Guo Xianghua and other practitioners in jail, and arbitrarily extended their terms. They claimed that they would only release a practitioner if they received enough money. Ms. Guo Xianghua was held for four additional days, and was released on September 24, 2007.