Korea: Practitioners Call for An End to the Persecution on the 12th Anniversary of the April 25 Peaceful Appeal (Photos)

(Clearwisdom.net) The Korean Falun Dafa Association held a press conference on April 25, 2011 in front of the Chinese Embassy to commemorate the 12th anniversary of the April 25 peaceful appeal. The April 25 appeal 12 years ago was the first major display of Falun Gong practitioners' peaceful, rational and non-violent efforts against persecution. Over the past twelve years, practitioners' great compassion and tolerance demonstrated in their work against the persecution has rebuilt a moral monument in the world. 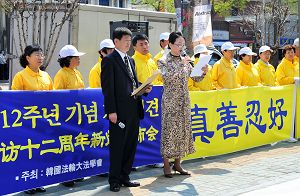 Mr. Li Tianxiu introduced the April 25 appeal at the press conference. He said that as the number of practitioners rapidly increased at that time, dictator Jiang Zemin was jealous and panic, and attempted to take “besieging Zhongnanhai” as an excuse to carry out the suppression of the practitioners. 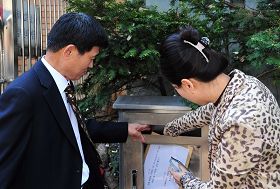 Practitioners delivered a letter to the mail box of the Chinese Embassy after the press conference.

On April 25, 1999, some 10,000 Falun Gong practitioners in China gathered outside the State Council Appeals Office to demand their basic rights of belief and the immediate release of 45 fellow practitioners who had been unlawfully arrested. Though as a result of the appeal the Chinese Communist regime promised to protect the practitioners' rights and released the arrested practitioners, three months later, the regime started a nationwide persecution to "eliminate Falun Gong." The brutal persecution has continued for 12 years.

“Belgium: Practitioners Commemorate the April 25 Appeal in Front of the Chinese Embassy (Photos)”

“The April 25 Appeal Was an Attempt to Prevent the Persecution”