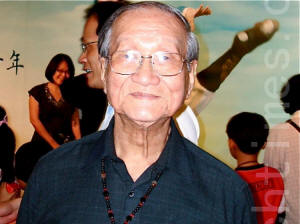 Xu Zhaosen, an 80-year-old painting artist—famous for his original Chinese ink paintings—praised the Shen Yun show, saying, "The program was so wonderful and touching that I felt like shedding tears ... I held back my tears."

"The first program was indeed wonderful, which depicted the scenes of numerous gods reincarnating into sentient beings, including the kings of various dynasties,” said the artist.

Having traveled across China to paint natural scenery, Mr. Xu said, "The scenery on Shen Yun’s backdrops was really exquisite. It displayed the gorgeous scenery in many famous scenic spots in China."

Mr. Xu talked about how talented the dancers were, saying, "The dancers’ skills, particularly in the dance Little Mischievous Monks, were really amazing; the Mongolian dance [Herding on the Grasslands] was also very wonderful, and we could see the scenes of herdsmen galloping and eagles flying in the sky."

Speaking about the last program in the show, The Opening of Heaven’s Gates, Mr. Xu thought it carried profound meaning. "I feel it reflected the Buddhist philosophy that humans can never overcome Mother Nature, so we still need the blessing of the Buddhas and Gods."

Calligraphy artist: Shen Yun is “beyond all expectations!” 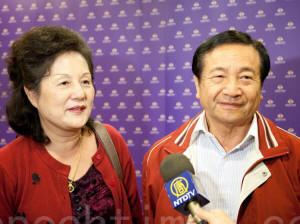 Xie Yongtian and his wife praised Shen Yun Performing Arts after watching the performance in Tainan, on April 13.

Xie Yongtian, a professional calligrapher and instructor, was full of praise for Shen Yun. “It’s beyond all expectations! The beauty is beyond any description. A manifestation of China’s 5,000 years of civilization, with the help of modern technology. It is really remarkable!”

Mr. Xie continued, “Divine arrival in the human world—which only Shen Yun can present. The descent of sublime grace through Heaven’s Gate.

“I think everyone must see it, absolutely beyond expectations. Divine power goes beyond time and space, a heavenly world brought to Earth again,” he said.

Mr. Xie was especially impressed with one scene of an emerging tsunami in the final dance, The Opening of Heaven’s Gates.“Faced with the coming of a tsunami, humans are vulnerable and helpless. ‘Truthfulness, Compassion and Forbearance’ has the power to hold back the roaring waves, the power being the might of divinity.”

He added, “This is the greatest performance I have ever watched in my life. I will certainly attend it annually, recommending Shen Yun to my family and friends, and even to everyone around me. I haven’t seen anything better than Shen Yun. It is unparalleled.”

Mrs. Xie agreed. “The Shen Yun performance is a kind otherworldly beauty; the beauty presented through costumes and dancers’ movements is a reminder of heavenly realms. The arrangement of programs presents both masculinity and femininity, both peacefulness and sensation.” 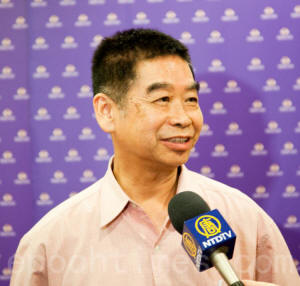 “I am truly touched. Every program is so nice. Superb! I hope I can see the performance again,” Mr. Yang said.

Describing the show, he said, “This is divinely [inspired] music and performance. Its magnificence far transcends the wonders of the human world.”

Mr. Xiao said that he could not imagine how beautiful the Shen Yun performance was until he saw the show with his own two eyes. He said, “Ones pursuit for painting is to depict the spirit and charm of an object. Shen Yun is the highest realm that we want to reach.” He added, “The programs have far exceeded my expectations. I hope everyone can come and see it.”

Moved by the performance, Mr. Xiao said, “Every program is perfect. It is my great fortune that I have the opportunity to see such an outstanding show. It has touched the deepest part of my heart.

“The color collocation of every scene is flawless. It is very skillful. Next year, I will bring several students to view the show together,” he concluded.

Mr. Wang Haoyi, a well known writer and advocate for literature and history, praised the Shen Yun saying that the enormous power drawn from truthfulness and compassion will move and motivate many more people to see the show.

“I had seen Shen Yun’s posters in many places during recent years. From these posters, I expected the show would be about authentic classical Chinese dance. I finally had an opportunity to view it today and, as expected, the performance was excellent. Even more precious, the artistic presentations were made through extraordinary costuming,” said Mr. Wang of Shen Yun.

“Every program we saw today is fabulous. Dances such as, Recalling the Great Qin and Ladies of the Tang Palace, are all very beautiful. Regardless of whether dynamic or static, the dances are all ethereal and vigorous,” he added.

Mr. Wang made special note of the dancers’ delicate movements. “Such elegance is hard to describe. That kind of lightness! That kind of exuberance! And there is an ingredient of grace, too. The great essence of Chinese culture is revealed among their postures and movements.”

Referring to the program, Our Story, Mr. Wang was amazed by the presentation techniques he saw. “The artistic presentation is marvelous. With a whole row of fairies and a female teacher, a lot of the profound, superb techniques are exhibited in the performance that depicted the revival of the teacher. I am highly amazed.”

From the vantage point of his first row seat, he could clearly see the subtle facial expressions and body movements of the dancing artist. “While watching the interaction between their teacher and the fairies, the three female students standing at the corner of the stage still displayed vivid facial expressions. That indicates that they are fully immersed in the scene. I think this is an outstanding group. They have done well in a lot of details.”

Regarding the Shen Yun Orchestra, Mr. Wang said, “The music is so excellent. I felt like leaning forward to see how they played the music, especially how the conductor’s waving hands governed the tempo of the music. Wow! I really would like to take a closer look at that. I think all the performers, all of the roles they played, and all of the connotation they delivered, have been really great!”

Speaking about the three Shen Yun Performing Arts companies touring around the world simultaneously, Mr. Wang said, “The power is phenomenal! I believe the energy created by the truthfulness and compassion will move and motivate many more people to come.”

“In various cities at different times, Shen Yun dancing artists have staged their performance so many times. However, you can’t feel their tiredness at all. Instead, they continue to act out every program earnestly and diligently. What is the strength that backs them up?” pondered Mr. Wang after he noticed the tight performance schedule of Shen Yun. 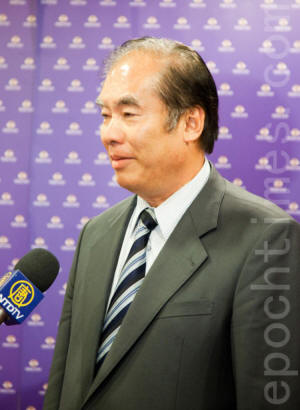 Zhang Dexiong, Chairman of Yung Chi Paint and Varnish Manufacturing Co. Ltd., a well-known paint products producer in Taiwan, highly praised Shen Yun for its range of colors, saying that the liveliness created through the colors had made the Shen Yun performance a visual feast. He added that the show purified his mind and brought him peacefulness.

Being a producer of paint products, Mr. Zhang is particularly sensitive to colors. He said, “Shen Yun’s color collocation is excellent. The coloring of each program is so thriving and vivid. The costumes and backdrops have been exquisitely tailored, too. Through the delicate arrangement of all elements, the entire performance has been so lively, making it a grand feast to the eyes.” He added that while watching the show, he “felt very peaceful. The show purified the mind.”

The dance set that impressed him the most was, No Regrets. Mr. Zhang said, “Human rights and freedom have become the universal values, which no one should be deprived of.” He admired the soloist singing, The Divine Call to Help You, by soprano Feng Ming. “Her voice is high and euphonic. It penetrates deep into my heart!” exclaimed Mr. Zhang.

Regarding the outstanding synchronicity of the Shen Yun dancers, Mr. Zhang said, “It is very difficult to achieve the level of teamwork like theirs. Just like managing a company, teamwork is very important.”

Mr. Zhang said that Shen Yun programs encouraged people “to bear compassion in mind and to do good deeds, which are beneficial to everyone.” He hoped that Shen Yun would one day stage their performance in mainland China so that China, a country with a poor human rights record, can “start paying respect to universal values, such as human rights and freedom, and adopting civilized ways in the country’s governance.”

After learning that Shen Yun performs all new programs, every year, Mr. Zhang said, “Certainly I will come to see the show again next year!”

Legislator believes Shen Yun provides a way to the future 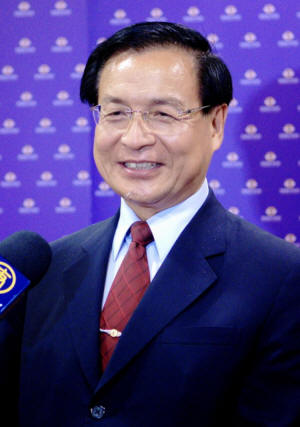 Also in the audience was incumbent legislator, Hsu Tien-tsai, who is the former Tainan City Mayor. After seeing the show, he recalled the recent natural disasters and said that Shen Yun provides a choice of direction for those who are struggling in today's world.

Legislator Hsu said that Shen Yun’s blend of arts and stage performance has reached perfection, and he felt it was very relaxing and natural. He praised Shen Yun for its demonstration of China's cultural essence and beauty. He explained, “It [Shen Yun] is the combination of Chinese culture and the aesthetics of the free world. I believe it can deeply touch the people from China.”

"The belief in truthfulness, compassion and tolerance, as well as benevolence and harmony, which are the virtues of Chinese culture, are very important; however, human beings are lacking in these principles. Shen Yun’s performance is a stark contrast to the impermanence of this modern world, and provides helpless people with a direction of choice,” Mr. Hsu added. 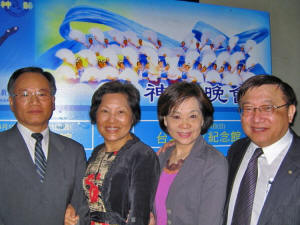 Among the audience members was Mr. Chen, a lawyer who attended the show with his wife and a friend.

“I was very excited because the show was just too wonderful. The combination of the music played on Chinese and Western musical instruments was impeccable. The live music played by the orchestra was really great.

“There are various musical instruments, including the erhu, drums, gongs, and flutes. It’s really great,” he said.

Mr. Chen said that he had difficulty taking in everything at the same time. “It was indeed so exquisite that I had to take turns watching them,” he said.

“The dances and the colors on the stage were really high-level. It is amazing that modern technology was perfectly synchronized with the performances of the dancers on the stage.”

Speaking of the meaning of the story-based dances, he said, “The performance was full of stories illustrating profound meanings. It’s indeed very good.”

Mr. Chen said that the power of faith and the exquisite performance could have the effect of purifying people’s hearts.

He praised Shen Yen’s efforts in promoting authentic Chinese culture through its programs: “In addition to the essence of the Chinese culture, [the performance] also displayed the spirit of truthfulness, compassion, and tolerance, with the emphasis on justice.”

As a lawyer, Mr. Chen has to be at the front line of upholding justice every day. He admired Shen Yun for its efforts in inspiring people’s compassion and courage, as well as urging people to wake up from delusion.

“[We] are relying on the power of justice, as justice will eventually overpower the evil,” he said.