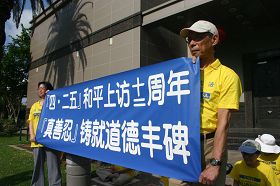 Falun Gong practitioners held a rally in front of Chinese Consulate from 4:00-6:10 p.m. on April 23, 2011. Some practitioners held banners readin, “Commemorating the Twelfth Anniversary of April 25 Appeal,” “Stop the Persecution of Falun Gong,” and “Falun Dafa - Truthfulness-Compassion-Forbearance.” Other practitioners sat on the ground. The serene atmosphere caught the attention of passersby.

Regarding the April 25 appeal, practitioner Ms. Shen said, “On April 25, 1999, about 10,000 Falun Gong practitioners appealed to the [Chinese] government to request the release of the innocent fellow practitioners who had been arrested, and ask for a reasonable environment in which to practice. They were self-disciplined, orderly, and showed the dignity of practitioners. However, the then-head of the Chinese Communist Party (CCP) initiated the inhumane persecution of Falun Gong on July 20, 1999.”

“For 12 years, people have known the CCP’s evil nature. Nearly 100 million Chinese people have quit the CCP and its affiliated organizations. The party can't last much longer. Falun Gong is becoming more popular. Truthfulness-Compassion-Forbearance has been spread to more than 100 countries.”