(Clearwisdom.net) At noon on April 21, 2011, Falun Gong practitioners held a rally in front of the Chinese Consulate in Toronto. Like the April 25 appeal in Beijing in 1999, there was no shouting of slogans – only practitioners peacefully sharing their stories with passers-by and exposing the Chinese Communist Party's (CCP) 12-year-long persecution of Falun Gong. They called on more people to help stop the persecution.

On April 21, Falun Gong practitioners hold a rally in front of the Chinese Consulate in Toronto to commemorate the 12th anniversary of the April 25 peaceful appeal

Twelve years ago, more than 10,000 Falun Gong practitioners in China went to Beijing to appeal at the State Council Appeals Office. In a peaceful fashion, they called for the release of practitioners who had been unjustly arrested several days before in Tianjin, and asked for the ban on the publication of Falun Gong books to be lifted. The then CCP head Jiang Zemin used the peaceful and rational appeal as a pretext to initiate the nationwide persecution of Falun Gong. The 12-year-long brutal persecution is still ongoing in China.

Falun Gong practitioner Ying Wang from Changchun arrived in Toronto in November last year. She was detained three times and imprisoned in a labor camp for persisting in practicing Falun Gong. During the rally, she narrated her suffering from brutal tortures in Heizuizi Labor Camp. 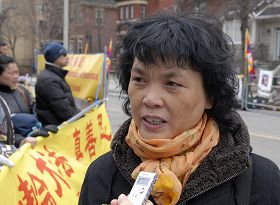 During the two-year imprisonment in the labor camp, prison guards used various means to try to force Ms. Wang to renounce Falun Gong. She said, “The first thing that Falun Gong practitioners suffer in the camp is electric baton shocks. The prison guards carried electric batons at all times and applied them as they wished. They forced me to sit down in the full lotus position with my hands behind my back from early morning until late afternoon. I was not allowed to change position or go to bathroom. The agony caused me to experience palpitations, shortness of breath, dizziness, nausea, and vomiting. I could only shake slightly to relieve a little of the extreme pain.”

Later the prison guards tied Ying Wang to a torture device known as the death bed, with her four limbs pulled to different directions. They also conducted brutal forced-feeding. After each forced-feeding session, her whole face was covered with blood, food and mucus. When she was finally taken down on the 13th day of being immobilized on the death bed, her legs had lost feeling. She could not move her arms and her face was pale. She was emaciated and extremely weak. When fellow practitioners saw her, they could not help but cry.

Ms. Wang said, “This is just a tip of the iceberg. During the more than 700 days I was imprisoned in the labor camp, the torture I suffered physically and mentally cannot be expressed with language. Though a few years have passed, I can still vividly recall the feeling of agony. I suffered such inhuman persecution just because that I wanted to be a good person and keep my own belief.”

Falun Gong practitioner Xin Huang was imprisoned for seven years in China for practicing Falun Gong. She was from Shenyang. Ms. Huang was released in April 2010 and arrived in Toronto in December. In her speech in the rally Ms. Huang related, “I started practicing Falun Gong in 1996. After practicing for two months, my illnesses were all gone. In 1999, I participated in the April 25 appeal. On July 20, 1999, the CCP initiated the persecution. Since August 1999, I started my difficult journey to appeal for justice. 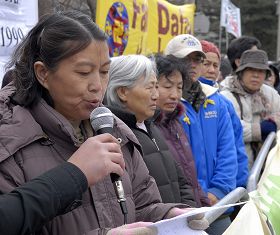 Xin Huang went to appeal twice and was detained. The police beat Ms. Huang and nine other practitioners with electric batons. After the electric shocks, she vomited for one hour. She was later brought to the detention center hospital. On August 2001, she was {{illegally arrested} for distributing Falun Gong informational materials. She was detained for 37 days. She held a protest hunger strike for 16 days, after which she was placed on medical parole as her life was in danger. In June 2003, Ms. Huang was arrested on her way to work to pick up her paycheck. This time she was imprisoned until April 5, 2010.

Ms. Huang said, “Life in prison is many times worse than hell. I was forced to take chlorpromazine, a drug damaging to the central nervous system, for four years. It is one of the CCP's crimes. The CCP has never learned that Dafa practitioners cannot be broken. I witnessed many practitioners in the prison explaining the facts with various means in such a difficult situation. They are really great and outstanding.”

Benefited by the practice, practitioners keep peacefully clarifying the facts

Mr. Zheng was a doctor in China. He said, “Falun Gong teaches people to be good. It is beneficial to any country. It not only benefits individuals and their families, but saves lots of medical cost for the country.”

He said that his mother suffered from heart disease. Her doctors said that she could not be cured and that she would live only for a short time. After she started practicing Falun Gong, she recovered and became healthy.

Mr. Zheng believes that Falun Gong practitioners keep peacefully clarifying the facts because they have a steadfast belief in Truth-Compassion-Forbearance. They believe that this value is a universal value and that people of conscience will stand up to safeguard the truth.

Mr. Zheng’s mother was at the rally, distributing flyers to passers-by. She appeared in high spirits. She said, “In 1990, I was in intensive care unit for 21 days in a hospital in Liaoning Province. My husband was a director of a department in the hospital. The head of the hospital asked the best doctors in the hospital to give a diagnosis for me. They rescued me with great effort. I was lucky to be alive. But I needed to carry pills for heart attack as I might need them at any time.”

In 1994, Mr. Zheng brought home a Falun Gong book. His mother said, “I did not think about gaining better health through practicing Falun Gong. I was interested in the book because I came to know the real meaning of life after reading it. I got answers concerning the hardships and difficult issues in life.”

She said, “I decided to learn Falun Gong since then. My illnesses were gone without notice.”

Mr. Zhaojin Zhang, Director of the Canada Falun Dafa Association, said in an interview, “For twelve years, Falun Gong practitioners have continuously explained the facts to people based on their steadfast belief. Truth-Compassion-Forbearance changes us. Many people come to believe in these principles and follow them in daily life.” He said that Falun Gong practitioners will keep clarifying the facts.

More people learn about Falun Gong from word of mouth

Mr. Zhang said, “Practitioners can see changes in themselves after practicing Falun Gong. Others can see our changes too. More people will join the practice after understanding Falun Gong.”

Mr. Wang and Lily participated in the event. They recently took part in a nine-day Falun Dafa introductory session and started to practice Falun Gong.

Mr. Wang moved to Toronto from Quebec due to a job change. Three weeks ago he started practicing Falun Gong. He said, “I study Falun Gong at home during the week and go to the park to join group practice on the weekend. I feel very well.”

Lily participated in the nine-day Falun Dafa introductory session after she heard of it from a friend. She said, “The practice is very good. Following the principles of Truth, Compassion, Forbearance, I have seen improvements in my own character. I had a hot temper before. After practicing Falun Gong, I have become more tolerant.”

“How Did They Quit Smoking?”