(Clearwisdom.net) Judge Andrew Cheung of the High Court of the Hong Kong Special Administrative Region ruled on March 11 that the Director of Immigration’s decision be “quashed” on the grounds that he “failed to take into account relevant considerations.”

The lawsuit (HCAL 43/2010) was filed on April 20, 2010, by the local presenter of Shen Yun against the Director of Immigration after he refused six members of the company entry to Hong Kong just seven days before the shows were due to commence in January 2010. 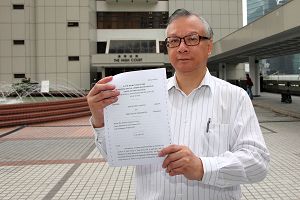 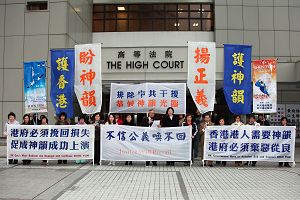 The first hearing was held on January 24, 2011. Hong Kong presenters of Shen Yun gathered outside the High Court calling for justice and supporting Shen Yun’s entry to perform in Hong Kong.

Shen Yun believes the visa denial in Hong Kong was due to interference by the Chinese regime. In a January 24, 2010, press release Shen Yun stated: "The Chinese communist regime has been seeking to interfere with our performances for years by trying to pressure officials and theaters to cancel our shows. We regret that the Hong Kong people are denied their right to see Shen Yun Performing Arts and understand that this incident constitutes a violation of Hong Kong people’s freedom. We hope the people of Hong Kong who treasure their freedom will urge the Hong Kong government to undo this mistake."

Shen Yun master of ceremonies Leeshai Lemish also said that, after the cancellation of the show, audience members who planned to travel to Hong Kong from mainland China had their tickets confiscated by authorities and some were even arrested.

The unexpected visa cancellations forced the organizers to refund over HK$5 million (US$642,000) to the public in lost ticket sales, said Mr. Kan, spokesperson for the Hong Kong presenter of Shen Yun.

“We were shocked by the director’s decision. The refusal to allow key production staff into Hong Kong just days before the shows was clearly a premeditated act to sabotage the show,” he said.

In the 41-page verdict, Judge Andrew Cheung pointed out that the Immigration Department should have considered two relevant points: the obvious value of cultural and art exchange to the society and the fact that the visa applicants in this case were different from other applicants seeking to enter Hong Kong. The applicants in question were members of an art group planning to perform in Hong Kong for a short stay. Thus, each application should have been considered as a part of the whole group.

The judge emphasized that the integrity of the show must be considered when processing such visa applications. He pointed out the immigration department should have considered whether the visa applicants were a part of the whole show. “In this regard, the subjective assessment of Shen Yun itself must carry significant weight.” In addition, Shen Yun Performing Arts explained to the department the importance to the show as a whole of the members denied entry. The immigration department was aware of Shen Yun’s explanation. The court took the department’s answer regarding this matter as bare assertion, which cannot be accepted.

The judge asserted that the players on stage, the staff backstage, and the choreographers are an integral body. Before the performance, they rehearse together and trust each other. These factors should be considered by the immigration department. But “the Director focused on the wrong question” and had “a serious problem focusing.”

In the verdict, the judge described the legal principles, stating that the immigration department does have the power to make decisions regarding visa applications, “This does not mean, however, that the decisions of the Director are beyond the control of the courts.”  The decision was an encouraging step toward ensuring cultural freedom and curbing the power of the Immigration Department, according to Chong Yiu Kwong, Chairperson of Hong Kong Human Rights Monitors.

“I’m happy about the court’s decision. I feel that the court’s verdict is quite fair. It puts a limit on the discretionary power of the Immigration Department,” said Chong. “After this verdict, Immigration can no longer be so reckless and unreasonably refuse others entry into Hong Kong.”

“We welcome the court’s decision, and we are thankful for all the righteous support from Hong Kong and overseas. We praise the court for being able to clear the obstacles,” said Mr. Kan.

In recent years, the Hong Kong Immigration Department has denied visa applications and entry for those that the Chinese Communist Party (CCP) does not like, and has even forcefully deported them.

Ms. Wan-chi Chu, spokesperson for the Taiwan Falun Gong Human Rights Lawyer Group, pointed out, “The Hong Kong Immigration Department changed after China resumed control of the city. It did not observe the basic law of ‘One country two systems,’ hid the fact that the CCP was interfering, and even fabricated lies for the CCP. The Hong Kong judicial system rarely touched the administrative power of the department, making it recklessly deny entry or violently deport visitors. In the past ten years, the department has made many incredibly ridiculous decisions. Of course, they were made under the CCP’s influence.”